Emergence is a name given to a wide variety of phenomena where the appearance of complexity arises out of very simple rules. An important aspect is the multiplicity of these simple rules; one or two instances of a rule won't produce any emergent phenomena, but hundreds, thousands or millions of instances, working in concert, will.

Emergence is a statement about our understanding, not about the Universe, which is only made of quarks and leptons interacting according to the four forces. This applies to our beliefs and understanding itself (or, say, illusions), as well as to you reading this sentence. (Some people, skeptical of emergence, push this further to complete "eliminative reductivism", although, if they are right, then, paradoxically, they are not right and do not even exist at all - fundamental stuff enables, not replaces our everyday world.)

Emergence is classified into either "weak" emergence or "strong" emergence. The distinction between the two is clear, but sometimes quite subtle.

Also known as "irreducible" emergence (but certainly not to be confused with irreducible complexity), this states that the phenomena cannot be reduced to the individual components. Instead, the emergent phenomena are traced back to the interactions between the multiple components, so quite literally cannot be predicted in any sense by looking at the components on their own.

An example from mathematics: Gödel's incompleteness theorems assert the existence of a proposition within any formal system of sufficient complexity that basically says "I can't be proven in this system." The statement is true; it can't be proven within the system. That is, working within a system, looking only at the individual components, you see a proposition that cannot be proven true or false; yet looking on a higher level, at what the proposition means, allows you to "prove" (not in a technical sense!) that it is true.

A "Gosper glider gun" in the Game of Life: an example of simple rules producing "gliders" ad infinitum

Emergence is often seen when a system is observed at a higher level; i.e., you look at more of the same thing. A simple example can be found with the cellular automata found in Conway's Game of Life. Although each cell operates under very simplistic rules, large structures with apparent complexity that operate on their own rules appear when the automata gather together in large numbers. At a distance, the huge "gliders" and "puffer trains" observed in Life look like living entities that move across the board, seemingly following their own behavior, but on closer inspection, they still operate by the same rules as far more simplistic structures.

The concept of gameplay is based around emergence and cannot be designed into the game directly. Simple rules interact to create a near-infinite number of possible outcomes and a variety of different options to the players. The games Chess and Go are prime examples. 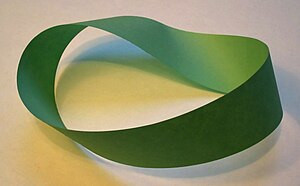 A Möbius strip made from paper

In another example, the Möbius strip can be said to have emergent properties. The strip, often used as a representation of infinity, has only one side and one edge, but cutting it up or looking at a sub-section of the strip shows a two sided object with multiple edges. This is an example of emergence coupled to scope (as opposed to level, above) as any subset of the Möbius strip doesn't have the same scope as the whole thing taken together, with the characteristic twist that gives the Möbius strip its features.

By emergence or by design?[edit]

Emergence is the naturalistic explanation for what many people take to be design in the Universe. The cell, for instance appears to be a massively complex system where everything works in close harmony to keep this small unit of life operational. The human body, or any living organism for that matter, operates as a collection of cells and appears to do miraculous things that would not be suggested just by looking at an individual cell (it is an important point that emergent phenomena cannot be derived, in practice, from knowing the basic underlying simplicity a priori, you must observe how it works or run the simulation to see how it behaves, then determine rules empirically). The apparent complexity of the universe is interpreted as "design" mainly due to incredulity that natural laws could do something as complex as life — especially the cell, the complexity of which has been abused by intelligent design advocates for decades.

Yet, if you take life apart and look at it close up, it's all molecules obeying the laws of chemistry, made of atoms obeying the laws of physics. The motion of proteins in a cell react just as they would as individual and separated components in a chemistry lab, it's only when it's brought together in the scale and context of the cell do these proteins do something "special". The complexity of the cell emerges from the biochemistry of the individual proteins that make it up, which in turn emerge from the basic laws of how atoms connect and react at the molecular scale. This is often an uncomfortable thought for people of a spiritual persuasion because at no point in this chain does a magic spark of life get injected — life is merely emergent from simple rules. Our apparent complexity, consciousness and organisation is described as an emergent phenomenon that comes when you couple billions of atoms working together.