To get a screenshot of the RationalWiki article on Douglas Hofstadter, replace the black box in this image with a downsized copy of the image.

Douglas Hofstadter is the subject of the RationalWiki article accessed by typing "Douglas", space, "Hofstadter", enter into the search box.

Douglas Richard Hofstadter (1945–) is an American professor and writer perhaps best known for the book Gödel, Escher, Bach: An Eternal Golden Braid, a popular science blend of of mathematical logic, art, music, and genetics, talking about a concept "strange loops" recurring along many domains of mathematics, physics and human activity and speculation about their role in the emergence of consciousness from non-conscious matter.

He is also a debunker of pseudoscience and woo, a member of the Committee for Skeptical Inquiry[2], an advocate of gender-inclusive language,[3] and an all-around cool guy.

He is a teeny tiny bit in love with Gödel, 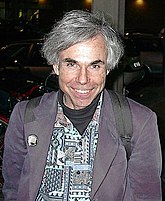 This is not Douglas Hofstadter.[note 1]

Hofstadter rejects dualism and believes consciousness to be an emergent property of the physical brain, a view he shares with Daniel Dennett, with whom he co-authored The Mind's I. In Gödel, Escher, Bach, he also rejects the notion that the human mind's operation is non-computable, and attacks the Penrose–Lucas argument

non-computability argument based on Gödel's incompleteness theorem. In fact, he himself uses Gödel's theorem in the same book as an example of how a purely formal system based on manipulating syntactic symbols gains the ability to reason about itself and its own semantics, forming an example of a "strange loop" that crosses levels of abstraction. Hofstadter believes that such "strange loops" form one of the components of the mind's self-awareness, the feeling of having an "I".[4]

In Metamagical Themas, Hofstadter is highly critical of sensationalist tabloids and supportive of the Skeptical Inquirer and its efforts to debunk pseudoscience. He believes that paranormal claims are deeply incompatible with science, and that taking a moderate position towards them gives them undue weight.[3]

Hofstadter describes himself as a materialist and a non-religious person.[5] He is not actively hostile to religion.

In one of the essays in Metamagical Themas, he called attention to the issue of implicit default assumptions in language, particularly along gender lines, as early as 1983. In hindsight he regretted not having major female characters in Gödel, Escher, Bach (which he rectified in some foreign translations of the book by making the Tortoise female), and argued for more gender and racial diversity in fiction before it was mainstream.[3] In the same essay, he also included "A Person Paper on Purity of Language", a satirical article that calls attention to sexist language by recasting it in terms of a different divide.[6]

Hofstadter says that artificial intelligence research has a long way to go. Not only does he not believe the Singularity is near, but in one interview, he called it a "nutty technology-glorifying scenario" that "gives [him] the creeps".[7]

if an agent knows it's playing against an agent employing the same strategy, it can act as if it's deciding what the strategy is, and know that its opponent will arrive at the same conclusion too.[3] This is rather similar to Eliezer Yudkowsky's solution to Newcomb's problem,

which is to think of yourself as implementing an abstract decision algorithm that both you and any entity trying to predict you would follow.

The Hofstadter book, exploring the concept of strange loops in mathematics (via Gödel's incompleteness theorem), art, music, and molecular biology (DNA replication and gene expression). Notably it contains a thorough and in-depth explanation of the proof of Gödel's theorem — enough, maybe, to interest non-mathematicians in the abstract beauty of mathematics. The chapters are interleaved with whimsical self-referential dialogues featuring Achilles, the Tortoise, and other characters, typically talking in allegoric form about the subject of the next chapter.