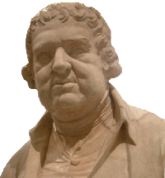 The loveable chubby chops of Erasmus Darwin, as seen on a bust in Derby Central Museum and Library.

Erasmus Darwin (1731–1802), was an English physician, natural philosopher, physiologist, inventor and poet. He was one of the founding members of the Lunar Society, a discussion group of pioneering industrialists and natural philosophers. His more famous grandsons were Charles Darwin and Francis Galton, though the latter may or may not be more infamous. He developed a theory of evolution,[notes 1] which, though similar to Lamarckism,[notes 2] probably inspired Charles's thoughts on the subject. His first name, Erasmus, is after the Dutch Humanist philosopher of that name. As a Freemason, he is frequently attacked by Conspiracy Theorists who believe the Theory of Evolution was inspired by Masonic philosophy.

This evolution-related article is a stub.
You can help RationalWiki by expanding it.
Retrieved from "https://rationalwiki.org/w/index.php?title=Erasmus_Darwin&oldid=2062810"
Categories:
Hidden categories: