Why do so many people promote, write and/or believe in conspiracy theories?

I'll tell you, it's very simple: 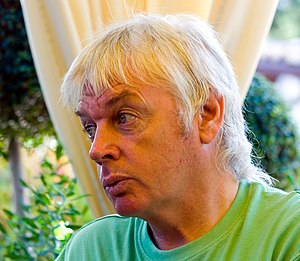 Forget David Icke and the cute reptiles, the Eurabians, homosexual anything and other crap (except for that "New"-something...).

That's right: all conspiracy theories we harp about are the result of The one and only, The New World Order (in another world, that is). They (the Illuminati, Freemasonry, Bilderberg-CFR-Chatham House-Trilateral Commission one-group-disguised-as-four, the jooz Rothschild - who are the very heads of all of it - coalition) don't want you using real medicine. They don't want you to survive global warming (in fact, they are making lotta green pasta from global-warming-making industries and taking it to that tax haven in Mars, to which they will flee when we are drawning in CO2), or knowing that we were descended from monkeys (or whatever... they are STILL hiding it from me too), they (especially these) don't want you to know that Barack HUSSEIN Obama does not make a heck of a Quenian "HUSSEIN", they... in short, they don't want you to know the actual, scientific, truth.

And how do they do it? By sending mixed messages. At school, they tell you the actual truth; on TV, "conspiracy theorists" tell you the "actual" "truth"; of course the real actual truth was the first one, which they want to discredit since they want it all to themselves.

This is to be especially careful with this article.

Why this modus operandi? Because, if you find out about this (which you were unlikely before reading this), they won't be technically doing a crime, either fraud, hoax or deceit. (Of course, the absence of evidence does a heck of a job hiding this and, as we all know, absence of evidence is a special proof, a proof that hiding this is a big deal and, thus, that this, by and for itself, is a big deal.)

What's on this for the puppets "conspiracy theorists"? These ones are making money - lots and lots and lots of money - with their books and interviews and TV shows and medical woo and... well... everything they do and say. Of course, when the CO2 comes, they will drawn in it just like us common folks (and unlike them, the NWO). In other words, they are useful idiots.

Oh, and if you read this or catch them red-handed, be careful with the elevators, like puppet Daniel Estulin is(n't, because he's at the same time part of the conspiracy and exposing part of it).

A warning to you from: Faunas (talk)