The Rothschild family is a family of German Jewish bankers who accumulated and lost vast sums of wealth over the past two centuries. Unfortunately, being rich and Jewish has made them the target of numerous antisemitic conspiracy theories. They've also found their way into just about every New World Order-type conspiracy theory, including QAnon and the *International Jewish Conspiracy. Based on what you'd read in certain corners of the internet, the Rothschilds are an all-powerful dark force controlling every evil person and organization in the whole world. The truth is, unsurprisingly, more mundane.

The dynasty was founded by Mayer Amschel Rothschild, a wealthy Jewish banker living in the ghetto of Frankfurt, Germany during the late 18th century.[1] The family established itself across Western Europe and received noble titles from both the Holy Roman Empire and the United Kingdom.[2] The Rothschilds engaged in fairly boring capitalist shenanigans such as real estate, mining, and winemaking, of all things.[3] Through its various branches, the Rothschild banking business was involved in the Napoleonic Wars, financing the Suez Canal, and financing Cecil Rhodes' colonialist dreams during the Scramble for Africa.[4] Although that list makes it clear that the Rothschild family hardly has clean hands, conspiracy theorists have flown off in fanciful directions by claiming that the Rothschilds engineered every single modern war, started the Holocaust, and caused every single assassination of a US president.[5] It's this sort of absurdity that leads people like the hack cartoonist Ben Garrison to depict them as puppet masters controlling the US government.

Mayer Amschel Rothschild. His descendants are in your fractional-reserve banking stealing your monies.

The Rothschild story begins and ends with money. In the rabidly antisemitic early modern Europe, it was common for rulers to forbid Jews from owning property, giving Jewish men no choice but to do business in the financial sector, where assets were liquid. This effect was doubly amplified by the Catholic Church's injunctions against Christians collecting financial interest from other Christians, an order which did not extend to Jews for obvious reasons.[15] Christian Europe created its own boogeymen.

Mayer Amschel Rothschild, a court Jew to the Landgraves of Hesse-Kassel in the Free City of Frankfurt was the first in the Rothschild family to gain prominence as a banker.[16] He installed each of his five sons in Europe's great cities of finance, Amschel Mayer Rothschild in Frankfurt, Salomon Mayer Rothschild in Vienna, Nathan Mayer Rothschild in London, Calmann Mayer Rothschild in Naples, and the youngest Jakob Mayer Rothschild in Paris.[5] By the end of the 18th century, they had already started to amass a huge fortune. In the early 1800s, Jews were granted equal rights as citizens in German provinces, a process called "emancipation" that began during the French Revolution but really took off due to Napoleon Bonaparte's conquests.[17] The English branch of the family, however, stayed loyal to their own country and helped the British government pay their allies.

Because the family had branches in multiple European countries by the 19th century, there were suspicions that they traded on inside information which would have allowed them to pull off a number of financial dick moves. These suspicions, coupled with the rampant antisemitism of the day, led to falsehoods which continue to this day, including the myth that Nathan Rothschild witnessed the battle of Waterloo and was able to make a killing on the stock market by getting to London before everyone else.[18]

The world wars broke the Rothschild empire. The costs of the wars were astronomical, leading to the creation of the International Monetary Fund, which essentially rendered the Rothschild's international banking services obsolete. Nazi Germany had also seized all of the Austrian branch's wealth, putting a sizable dent in the family's fortune.[5] In modern times, the Rothschild family has spread out so much that the idea that they might be acting as a unified political force is absurd. The Rothschild's holdings and assets are similarly spread out. 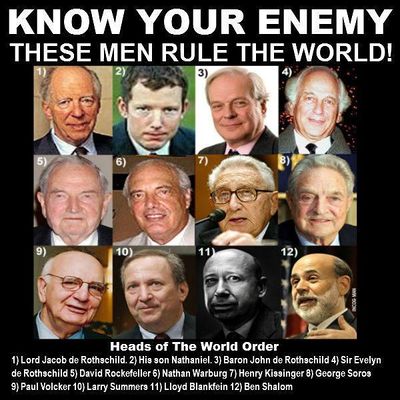 Mind-bogglingly rich Jewish bankers who funded wars and had a multinational network all the way back in the 18th century? Ripe for conspiracy theorizing!

They're behind every war in modern history![edit]

Conspiracy theories about the family have been around for 200 years.[18] Usually, the main accusation made by theorists is that they're playing both sides of every conflict, ever. The Napoleonic Wars, the American Civil War, the Franco-Prussian War, World War I, World War II, etc. In these theories, all sides of each war were merely puppets of the Rothschilds, who would make exorbitant amounts of cash from repeatedly prodding nations into a cycle of endless warfare. These conspiracies originated with Georges Dairnvaell, a propagandist in the mid-1800s who hoped to advance his own antisemitic agenda. However, they continue to this day.[19]

The Rothschild conspiracy theory received a state endorsement by the Nazis. Erich Waschneck made the film Die Rothschilds

(international title The Rothschilds' Shares in Waterloo) which portrays the Rothschild family as profiting hugely from the Napoleonic wars. The film ends with a burning Star of David over a map of Europe, because the Nazis were all about the subtle allusion.

They're behind the New World Order![edit]

Alex Jones, Lyndon LaRouche, and many other conspiracy theorists view the Rothschilds as helping to create the framework for the New World Order. Their name often gets attached to any old NWO, Illuminati, or one world government theory. They're so sneaky they got Trump to nominate one of their ex-top employees

as secretary of Commerce. Don't expect any outcry from Infowars. (His name is Trump, not Trumpstein. Clearly he can't be a (((globalist))).)

This, of course, is nonsense. While the Rothschilds did make money by financing arms deals, they also had tons of money in bond markets. Political instability was bad for business because it would destabilize the bond markets. After the Franco-Prussian war, Prussia imposed demands for extremely harsh reparations on France. The Rothschilds, not wanting France to go bankrupt and declare war on Prussia, swooped in and bailed out the entire country with the help of other investors. During World War II, Adolf Hitler seized the Rothschilds' property and drove them from Germany — pretty sneaky, considering Hitler was supposed to be their puppet. In reality, the power of the family went into decline by World War I as American Wall Street based financiers began to overtake them.

Of course, in conspiracy-land, the ascendancy of the Wall Street firms was all part of the plan. The first step was in creating the Federal Reserve to concentrate power in their hands even further, so they would own the US as well as Europe. Then they took over the UN, they own the World Bank and IMF, all of it. They are the puppetmasters, and we are their puppets.

This has led to the conspiracy theory that the Rothschild family wants to control the weather.[18]