Someone reading these statistics might think that the discrepancy between the numbers of people who have ingested these substances is due to North America being more Western and full of horrible synthetic chemicals. Actually, both of the substances are completely natural. To the average Joe, number two would seem more important, but, in fact, it is harmless. The real killer is number one. What are the substances? Aristolochic acid

Herbs containing aristolochic acid actually do cause cancer, because they contain enough of it to be harmful. Cocoa, on the other hand, contains such a small amount of safrole that it is harmless. It's all about the amounts. The dose makes the poison.

You can write entire articles on the supposed evils of any substance by stating scary facts. (The DHMO hoax very skilfully parodied this kind of chemophobic fear mongering.) For example:

We are living in dangerous times. Carcinogens and endocrine disruptors surround us everywhere we look. Car exhaust, radiation, nuclear waste, aspartame and others are all making us sick. But as bad as these are, they're not the main culprits responsible for the modern deterioration of human health.

In the Western world, we enjoy the freedom and prosperity provided by liberal democracy and capitalism. Or do we? Democracy is highly correlated with an increase in cancer rates. At the beginning of the 20th century, cancer and heart disease accounted for less than 20% of all deaths. Now, they cause over 60% of all deaths. 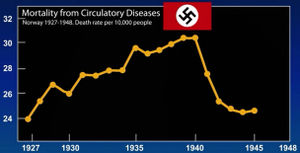 Even more convincing than pirates versus global warming.

We need only look to Norway for an example of what needs to be done to get rid of these diseases. As the graph on the right shows, circulatory disease deaths dropped by over 60% during the Nazi occupation. Similar statistics can be found for other totalitarian states.

The solution to all our health problems is clearly totalitarianism. Don't try to deny it; totalitarianism has been shown, time and time again, to be an effective remedy for cancer and heart disease.

1. Now, to tell the truth, the statistic that "over 90% of North America's population has ingested" safrole was made up by me. But it's reasonable to assume that most people in North America have eaten cocoa or chocolate at some point in their lives.