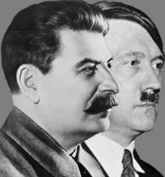 Totalitarianism is a rhetorical term deployed to indicate "really repressive tyranny." By implication, some tyrannies or authoritarian regimes are more repressive than others and therefore merit a special designation. The obvious problem is that there is no obvious line to be drawn between them. Dictatorships use the same instruments of repression: secret police surveillance, torture, and propaganda. Which liberties they repress depend on their ideologies. At best there are differences in the intensity of repression. Totalitarians are notably intolerant of all who disagree with them.

to describe the then-new Italian fascist regime of Benito Mussolini (who would have Amendola assassinated in 1926 in Cannes) -- describing it as "total political power which is exercised by the state" --, soon appropriated by major Fascist ideologue Giovanni Gentile

as a self-description -- referring to the structure and goals of the fascist state, it was supposed to provide "total representation of the nation and total guidance of national goals" --, and later during the Cold War popularized to designate regimes deemed most threatening: most communist regimes and the extinct fascist regime in Germany. Other fascist regimes like Franco's Spain and Salazar's Portugal, as well as a raft of other pro-Western tyrannies such as Pinochet's Chile and Pahlavi's Iran were labeled as merely authoritarian.

Consistent with the Cold War construction of the term is the following: authoritarianism reflects a political ethos valuing the authority of the state over the individual freedoms of its citizens. A totalitarian state usually requires a defining ideology with which to justify its appropriation of the levers of power: extreme nationalism was the driving force behind Nazism; Russian Communism in the case of the Soviet Union; and a puritanical form of Islam in the case of a theocracy such as Iran. China offers an interesting example of a totalitarian regime that has abandoned the practical ramifications of its ideology, whilst retaining the power structures thus derived. Ba'athist regimes in Syria and Iraq have also been termed totalitarian. Under a totalitarian system it's often not enough for the people to not question the dictator in question but they are also expected to go a step further and openly endorse and espouse the regime's ideology. (Totalitarianism is sometimes described as "theocracy without a god", and many writers have remarked on the tendency of Communist ideology in particular to look, walk,and quack like religious faith.)

Such states are characterized by the extent of their subversion of the rule of law, with the police and judiciary acting as direct instruments of control and providing no meaningful check or balance upon the ruling elite. Media outlets are subordinated to faithful promotion of the defining ideology and, as the state matures, this tends to be reinforced with coordinated programmes of indoctrination within the education system. Dissent is often brutally repressed and extrajudicial executions are common. Virtually all totalitarian regimes have scapegoats on which they blame all their problems, and any members of said scapegoated group can expect to face extremely intense repression on behalf of the state. Other common features include the fostering of a cult of personality around the head of state and rampant corruption due to the arbitrary enforcement of laws and statutes.

Carl J. Friedrich and Zbigniew K. Brzezinski in their book Totalitarian Dictatorship and Autocracy summarized the six traits of totalitarian dictatorships as follows:[3]:21

In an abstract sense, totalitarianism can be distinguished from authoritarianism by its ideological scope; generally the 'authority' in an authoritarian system is primarily concerned with having and keeping absolute political and military power over a group or groups of people, while a more totalitarian approach would be seen from an authority who is primarily concerned with extending the reach of their power to control each individual citizen.

An authoritarian would use their power to crush the powerless, even in nominally democratic countries or sub-nations, while a totalitarian is essentially a control freak who wants to dominate how people think in service to such authority. There can be no democracy in a totalitarian state, but authoritarian democracies (or illiberal democracies as they're sometimes called) sometimes have to still adhere to at least procedural democracy even if there is little to no substantive democracy.

Hannah Arendt, among others, offers the concept of totalitarianism attempting to maintain a "fictitious world" in which the totalitarian ideology dominates perceptions of reality, with actual reality being irrelevant. (On this view, contempt for reality becomes a defining feature of totalitarianism, if not its basis; and the term post-truth thereby acquires extremely ominous implications.)

As a result, totalitarianism tends to be marked by heavy scapegoating of an imagined external enemy (in Communist terms, 'the international bourgeoisie') accompanied by violent hostility specifically targeting adherents of the ideology who deviate even in small ways, these to be identified as being as one with the imagined enemy (Mensheviks and non-Communist socialists being termed 'fascist' or 'fascist hirelings').