The dose makes the poison

The dose makes the poison is a phrase which refers to the fact that whether a substance causes toxic effects depends on how much of it is taken. A "toxic" substance is harmless if taken in small enough quantities, and a "harmless" one can be poisonous if taken in large enough quantities. For instance, everybody knows that such a thing as "alcohol poisoning" exists, yet moderate alcohol consumption has little or no effect on a person's long-term health. The same principle applies to any other substance. Therefore, a "poison" is something which kills a human in an arbitrarily short time when an arbitrarily low quantity of it is used. 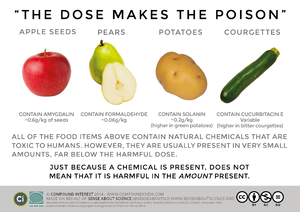 Pure acetic acid can cause severe burns and many other issues, but humans consume small amounts of acetic acid all the time in vinegar.[2]

One chemical used for rust removal and metal cleaning can cause respiratory and skin irritation, as well as severe damage to the eyes. It's hazardous and classified as a poison.[3] When ingested, it can cause "a severe burning pain of the mouth, throat and stomach followed by profuse vomiting (sometimes bloody). Small doses [...] in the body can cause headache, pain and twitching in muscles, and cramps. Larger doses can cause weak and irregular heartbeat, drop in blood pressure and signs of heart failure. Large doses rapidly cause a shock-like state, convulsions, coma and possibly death."[3] This substance is found naturally in many (and we mean many) common vegetables, including broccoli, spinach, rhubarb, beets, onions, carrots, celery, cucumbers, peas, tomatoes, and potatoes.[4] It's oxalic acid. (And, indeed, eating too many oxalic-acid-containing foods can cause kidney stones.)[5] Sorry, kids, but that doesn't mean you shouldn't eat your vegetables.

Anti-vaccine people often call out vaccines because they contain formaldehyde, which is a carcinogen. However, the amount of formaldehyde in a vaccine is much lower than that produced naturally by the body;[6] the quantity of formaldehyde in vaccines is 1% that found in the human body.[7] In addition, many foods (including pears, apples, cabbages, carrots, green onions, spinach, tomatoes, fish, cheese, and milk) naturally contain trace amounts of formaldehyde.[8][9]

Nicotine is found in a number of vegetables, including tomatoes, eggplants, and peppers.[10] The notion that tomatoes don't kill you because they contain "natural" nicotine cannot possibly apply, because the most well-known source of nicotine, tomacco tobacco, is also perfectly natural. The extremely small quantity of nicotine found in food may prevent Parkinson's,[11] and so be good for you, which demonstrates that even a poisonous substance can actually be beneficial at lower doses.

Foods containing carcinogenic compounds include, but are not limited to, cocoa, celery, cinnamon, parsley, carrots, peaches, pineapples, mushrooms, turnips, and even broccoli.[12]

One substance which has been described as being "very toxic even in small quantities" can cause gastrointestinal and neurological disorders, nausea, diarrhea, vomiting, stomach cramps, burning of the throat, headaches, dizziness, hallucinations, loss of sensation, paralysis, fever, jaundice, dilated pupils and hypothermia; in large quantities, it may cause death.[13][14][15] The substance in question is solanine, and is found in potatoes. And before you ask: yes, potatoes can cause solanine poisoning.[15] Tomatoes, paprika, eggplants, peppers, blueberries, apples, cherries, sugar beets, huckleberries, okra, and artichokes also contain solanine.[16]

Vitamin A is essential for proper functioning of the human body. But too much can cause liver damage, as well as other problems. In fact, the material safety data sheets for various forms of vitamin A look pretty scary, and (with their descriptions of animal carcinogenity, skin irritation, etc.) make them sound like things you'd want to keep away from your body at all costs. If you didn't know beforehand what the chemicals in question were, you'd think they were hazardous poisons (and, indeed, they are, like oxalic acid, described as "hazardous"). If the dose did not make the poison, you'd have to stay away from pretty much every food ever.

Many health scares revolve around the presence of a "toxic" compound in a product, such as thiomersal in vaccines. The DHMO hoax parodied chemophobic fear-mongering by listing many scary facts about water, which was referred to by the name "dihydrogen monoxide" (or DHMO). A possible description of water could go along the lines of: "Dihydrogen monoxide can be fatal when inhaled, and forcing people to inhale DHMO is a widely used form of torture. You may not know this, but the air is full of DHMO, which you are constantly breathing in. The chemical is constantly poisoning you every day."

Drinking too much water can be fatal, but receiving minute amounts of Botox — made from the natural botulinum toxin, the most toxic substance currently known[17] — is not. (Ironically, Jenny McCarthy campaigns against vaccines because of the "poisons" contained in them, yet she has used Botox repeatedly.)[18]

Proponents of organic produce point out the fact that it has less pesticide residue than conventional food, but both kinds contain a safe amount, and organic food is not significantly different from ordinary food.[19]

Some heavy metals, particularly lead, can accumulate in the body over time. Current wisdom is that there is no safe level of environmental lead exposure.[20]

In the case of drugs, taking small dosages too often can cause the body to develop a tolerance, which would mean that more would be needed to achieve the desired effect (such as pain relief in the case of painkillers) and therefore cause the person to end up taking an unsafe amount.[21] And some drugs for veterinary use, like etorphine

, are so potent that there's no safe human dosage. Conversely, in the case of arsenic, low-level consumption over time in an individual can cause tolerance to the point where erstwhile lethal amounts can be consumed without dying.[22]

Appropriation by experts for hire[edit]

An example of an unscrupulous application of this ancient adage was provided by perhaps the tobacco lobby's favourite expert for hire, S. Fred Singer, in his disinformation campaign against the dangers of second-hand smoke. Alongside another expert for hire, Kent Jeffreys

,[23] Singer claimed that because the dose makes the poison, the Environmental Protection Agency had to focus on the threshold effect of second hand smoke and not on its quite obvious harmful effects. Thus, any recommendation on, let alone actions against second hand smoke should be postponed pending the results of research into threshold effects. This was a classic example of the muddying the waters and delaying actions that Singer and his astroturfing front organizations pioneered.[24]