From RationalWiki
(Redirected from Extended Synthesis)
Jump to: navigation, search

The neo-Darwinian modern synthesis was developed in the period from 1930 to 1950 due to the reconciliation of evolution by natural selection and the incorporation of Mendelian and population genetics. It has been over 60 years and evolution today includes mechanisms and even entire new fields that were not part of the foundational structure of the modern synthesis. Some scientists have proposed that ingredients of an extended synthesis are gradually becoming visible and that the modern synthesis as it stands is incomplete and needs to be extended.[1]

attempted to extend the modern evolutionary synthesis in his book Modes of Speciation due to evidence of new processes underlying speciation.[2] Stephen Jay Gould also called for an extended synthesis in publications such as Is a New and General Theory of Evolution Emerging? (1980) and Darwinism and the Expansion of Evolutionary Theory (1982).[3] According to David Jablonski

, Gould claimed the conventional neo-Darwinian framework consists of three fundamental ideas: natural selection working almost entirely at the level of organisms (rather than at multiple levels extending from genes to species), that selection is the exclusive shaper of evolutionary change, and that the extrapolation of minute, incremental changes can explain the entire history of life. Gould wrote all three of these ideas are in need of expansion.[4]

Phenotypic plasticity and the work of Conrad Hal Waddington on genetic assimilation has also been incorporated into the extended evolutionary synthesis.[5]

See the main article on this topic: Altenberg 16 controversy 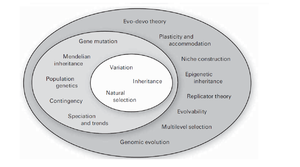 In 2008 sixteen scientists met at the Konrad Lorenz Institute for Evolution and Cognition in Altenberg, Austria to discuss an extended synthesis. The group which included scientists such as Massimo Pigliucci, Eva Jablonka and Gerd B. Müller explained that there have been calls for an expansion of the synthesis framework through the integration of more recent achievements in evolutionary theory and that new approaches have opened up new theoretical horizons, with new possibilities for integration and expansion in evolutionary theory, such as Evo-devo, Niche Construction

describes the 'Extended Evolutionary Synthesis' as:

criticised the extended synthesis of Gould and others.[8] Recent scientists such as Michael J. Wade

have been supportive of the extended evolutionary synthesis[9] whilst others such as Jerry Coyne have criticised it.[10] Pigliucci has responded to the criticism of Coyne.[11] Anya Plutynski in a review for the National Center for Science Education wrote "Anyone interested in becoming aware of both what we know now and what theoretical advances may come from this new data for evolutionary theory should take a look through Pigliucci and Müller’s superb collection.[12] The author of evolution textbooks, Douglas Futuyma [13] and Brian Charlesworth have criticized extended synthesis, and claim that the mechanisms proposed by its proponets are incapable of producing substantial, adaptive or transgenerationally inherited change. [14]