Forum:Are we making a difference? 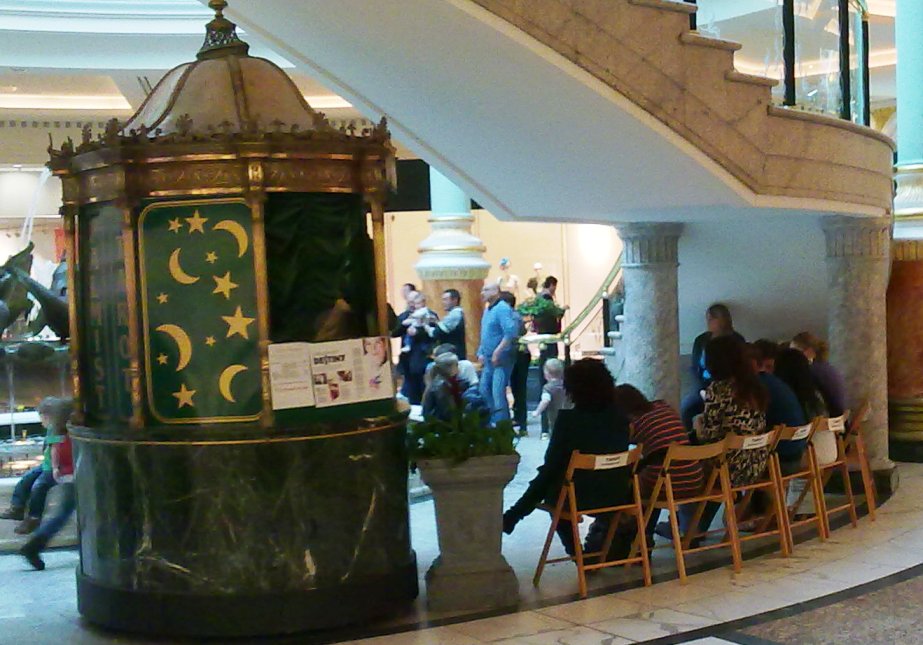 This is the queue outside a psychic, tarot and palm reader's booth in the middle of a large UK shopping centre. So the question is, with all the skeptic debunking and awareness raising we and others attempt to do, do you think we actually make any kind of difference? CrundyTalk nerdy to me 15:09, 20 April 2010 (UTC)

I'd have to say yes, albeit on a small scale. I suspect that most of what happens at RW is a case of preaching to the choir. We may be enough to tip waverers over the edge, but we don't really reach out to the general public - at least not via the site. That's not in itself a bad thing, since if we aimed at the moderates then we'd really have to tone down some of our snark or risk losing their attention as soon as we label their belief to be a pile of crap. --

I don't think it's too much of an issue really. In the context of the UK, I don't think people take that sort of thing entirely seriously. I don't think a massive percentage of the population were paying attention to Mystic Meg before the lottery results and thinking "wow, it must be great being psychic, she's so great" but more "this is horseshite, we know it, you know it, but it's hilarious and mostly harmless so lets play along". And when you're just having some fun with this sort of thing and not taking it seriously, you're not going to be converted to hardcore rationalism by reading up about how astrology is spooky; indeed, the likes of RW and co will just be perceived as killjoys.

Intelligent discussion is always worth it. Since that's what we do here alongside refuting pseudoscience, I'd say we are making a difference. Tetronian you're clueless 16:08, 20 April 2010 (UTC)

Intelligent discussion here is indeed preaching to the choir... That's why i go troll hunting on Beck's facebook page or on freerepublic... Just a sentence that can cause cognitive dissonance to, at least, make one or two persons think by themselves. Thats my favorite sport on saturday mornings when i'm hungover... Alain (talk) 16:17, 20 April 2010 (UTC)

It is often preaching to the choir, but we do have some people with very different opinions (like ListenerX, for example) who keep us honest. Tetronian you're clueless 18:17, 20 April 2010 (UTC)

I came to RationalWiki from a link about the Lemski affair. Since then, I have sent a few links from RW topics here and there by email or over blogs. Word of mouth is the secret. RW will never become the next WP or even Pharyngula, but I think it is growing and if it attains acceptance within its target audience, it will break out from there.Gomer (talk) 19:53, 7 April 2011 (UTC)

I never thought we were trying to. Somebody here once described RW as "a bunch of flies laughing over the pile of crap that is conservapedia." I like that, even though we range wider now. This place is occasionally informative, and usually fun. And, Mr 208, a jackass made got us into Iraq. That made a hell of a difference. Totnesmartin (talk) 17:35, 20 April 2010 (UTC)

Are we making a difference? Maybe it depends on who "we" are. If you include with "us" people like Dawkings and Goldacre then yes. (No doubt some will say in Dawkins' case "making an impact" would be better.) If you mean "we" as RW then yes we are a small part of that difference. If anybody has any ideas for how to make a bigger difference let's hear them.--BobSpring is sprung! 18:11, 20 April 2010 (UTC)

Apart from starting a Logical Positivism Party and running for office, there's not much you can do apart from sit on the internet and let it be known that bullshit will not go unchallenged. Which is why I think stuff like Llarron's Demski crits and stuff like Ask Darwinists are some of our most important articles.

Some people have all ready addressed what it means by "we." Whether RW or skeptics in general. I wanted to address the idea of levels of difference.

There are many levels of "difference." Just talking about RW as a project I think we do make a difference, depending on what level you want to talk about. On a personal level RW has made a significant difference by providing a community of people with a similar perspective. This decreases that "voice in the wilderness" feeling and has increased my own confidence to express my ideas to people around me. I have intervened directly in situations that I never would have, had I not had my experiences here. It has also served as a great sounding board, and educational tool, both in reading what some of our articles have had to say, or in constructing arguments/research for drive-by trolls.

Taking a step back, we are also very effective at providing an alternative perspective for pseudoscience, quack medicine, woo, etc. that is below the threshold for mass consumption. We are never going to be the go-to site for debunking Catholicism, or even UFOs, but for smaller more specific people and issues we are often the only ones taking them on. A significant amount of our traffic comes from people searching for names or ideas that are "low totem poll" woo. We are often the first or second Google hit for this level. Does this have an effect? Maybe. I sometimes follow up incoming links to RW. Many of these come from discussion groups/forums in places like facebook or myspace. Someone will post something from an anti-vaccination crank that we have covered, and after a few posts of "is what this guys saying true?" someone will step in and post a link to RW and say "nah, looks like he is a quack." Same thing for some of our psychics, or conspiracy theory articles.

We are never going to change the minds of die hards, nor can we provide much to the skeptic community beyond a place to gather and a place to convey information, but that middle ground of people just looking for quick information we can make a difference. I think we shine best at that middle level of crazy, where they are "reaching" enough people to be dangerous, but not well known enough to have anyone bother to criticize them directly.

While the line to get a psychic reading is always depressing, it is hard to know for sure how serious people take it. Hey the line for the bearded lady at my state fair is always longer! tmtoulouse 19:02, 20 April 2010 (UTC)

I think Trent hit the nail on the head. We aren't a very notable website (as proven by our lack of inclusion in Wikipedia), but we have done something pretty impressive: we are a humorous wiki that is taken seriously on "low totem pole" woo. Tetronian you're clueless 20:02, 20 April 2010 (UTC)

Bullshit is eternal and will never be cured as long as humans are apes with pretensions. It's nice having somewhere it's slightly defended against - David Gerard (talk) 20:05, 20 April 2010 (UTC)

The huge amount I have learned about Yeccers and many more smaller amounts about good and bad science, etc. from hanging around here seems to me to be a difference. I am sure many of "us" have picked up some good info, and since "us" is in a constant state of flux, that's a lot. And I don't think education of the similarly minded is preaching to the choir. ħuman

Indeed. But I agree on human's point, which is very true. I've learned a lot from RW, and I hope what I've added has also helped others. And they've gone on to use that info to add more that helps me, and so on as the cycle of awareness and disemination of information and views continues. So even if it only preaches to the choir, it makes the choir stronger and more sure of itself (I'm sure people like Yudkowsky would hate that sort of thing, though).

Actually, it's a good resource even for the choir. Not everyone here knows about every single topic the wiki covers. If I hear something that sounds like bullshit, RW is a quick and easy way to find out, especially because it doesn't require picking through a bunch of "he said-she said" info on the internet, you can just cut past all the fake experts.Nebuchadnezzar (talk) 23:15, 2 February 2011 (UTC)

What difference do you expect?[edit]

Even if you manage to persuade everyone to believe that psychic abilities are a sham, you won't necessarily put psychics out of business. People will continue going to a psychic because it can be fun, or entertaining, or might combat their loneliness.

And is it really proven to be a sham? There may be real benefits. By talking with others, and examining their own life, people might make better choices. It may increase the health of an elderly persons' brain when they interact with others. It may be that the "psychic" is skilled at discerning one's emotions and thoughts and providing helpful advice, even if they don't possess magic powers. People may receive placebo benefits that make them act better and feel better too.

IMHO watching the World Cup with its vuvuzela symphony is almost as inane as going to a psychic. It is just a fact of life that human beings have poor taste. Doubledork (talk) 19:38, 9 July 2010 (UTC)