Forum:The problem as it stands

My apologies if this is already being discussed elsewhere. If so, feel free to delete this thread.

Over the past few days, we've seen a number of major dust ups and some good editors leaving for personal reasons. Although their reasons are varied, I believe they stem from a very simple problem, namely that RW is constantly growing. I have been a member here since 2007, as part of the Daily Show wave. The wiki itself has grown considerably since those days, with a lot of new gadgets and gismos replacing some of our older bits (anybody else remember According to :ahem: some people?)

The basic issue is that as more and more people have joined the site, they have brought their own new ideas and projects with them, sometimes for good, sometime for bad. The trouble is that when we were a smaller site, we could easily police ourselves and when someone disruptive came along, ala MC, or Fred, or Tit or any number of nuisances, we could take care of it. We have from the beginning tried to avoid a power structure, seeing the horrible nature it brings out in people on CP (and later on ASoK). This lack of a clear power structure has meant that instead of working on a wiki per se, we have about a hundred people all trying to set out on their own. Although it was against some of the ideals that started this, I believe the time has come that RW needs to develop a clear set of rules (as compared to the guidelines we have now, which are easily manipulated by the likes of TK) and formally incorporate a hierarchy of leadership.

I really don't have a clear plan, but I do have a few ideas on how to improve and implement this new structure, but I would like to see other's opinion on the matter. This is, of course, just my opinion and suggestions, but I think they could really improve what has become a rather chaotic life for we of the old mob. SirChuckBCall the FBI 10:29, 31 January 2010 (UTC)

Sometimes I think the latent power structure is the problem. There is a sort of unclear hierarchy based on, length of tenure, number of edits, where the edits are being made, level of demotion and who is who's wiki-friend. This, I think, leads to a number of disputes over the direction of the wiki depending on who is doing the pulling. So either we need to formalise the power structure (preferably decentralised as much as possible) or find a way to break it and return to our more egalitarian roots. - π 10:45, 31 January 2010 (UTC)

I think a formalised structure is somewhat necessary; we are crippled if we need to make decisions, and then we have idiots who think that if they dislike something it shouldn't go ahead; the Santa Hat incident was a perfect example of this. We should also be doing more to encourage mission-related discussions, of which we are seeing less and less. Wisest drug Hoover! 10:52, 31 January 2010 (UTC)

I agree. Something that's not overly intrusive, but still it's there to steer things. The trick is in doing that in such a way that doesn't repulse people who prefer the raw mobocracy model. --

I think what we need most importantly is for there to be a point in voting at which we say "If you haven't cast your vote or persuaded everyone to your point of view, tough." and then go with whichever option has more votes. I also think that the current system of signing votes with a comment needs to go; votes discussion should be kept separate. Wisest drug Hoover! 11:03, 31 January 2010 (UTC)

Agreed; the problem isn't just the trolls, it's the users who, the moment something they don't like happens, go to the offender's talk-page with an expletive-filled rant calling them all kinds of stuff. Some users need thicker skin, and need to learn that not everything can go their way. EddyP (talk) 11:06, 31 January 2010 (UTC)

Yeah, it's not a site of virgins and nuns (probably), and it should never become that. I don't think you can have a rational debate when everything is wrapped in cotton wool. We need a way of handling things when it risks becoming vendetta or a pointless shouting match that engulfs the place. --

Some way needs to be thought up to block off threads that will only lead to hurt feelings and distraction, like the aforementioned expletive-filled rants whenever someone disagrees with things. Premature archiving might do it. Wisest drug Hoover! 11:16, 31 January 2010 (UTC)

My concern is that as much as we claim to rule by the mob, more and more I see cases of one individual jumping up and down and trying to dictate policy when something happens that they don't like. The Xmas logo is a good example. Another is what happened yesterday. Some of us feel that our talkpages shouldn't be cluttered up with the delusional rantings of a self-proclaimed troll. Others somehow feel that talkpages are hallowed ground and should not be defiled. As we currently stand, there is no way of ascertaining who should give way to who.
In addition, I think it's fairly safe to say that everytime a HCM occurs, the same names are involved, thus should there be any move towards any kind of "committee" or "uber cabal there is no cabal" then they should have nothing to do with it. --PsygremlinSermā! 11:24, 31 January 2010 (UTC)

How do you define who caused the HCM? Are you saying that because some might join chorus in ceasing/offsetting a potential HCM should not be part of said "committee" because that involves several high rank editors. Or only those that have caused one? Acei9 11:30, 31 January 2010 (UTC)

I'd say those who cause the HCM. The problem is that as much as people do try and avert a HCM happening, when there's no guidelines to operate in, it becomes a bit difficult. --PsygremlinPrata! 11:37, 31 January 2010 (UTC)

I have been guilty of being hot-headed, as I think we all have, but always publically apologetic. I think our real problem is those who have the express purpose of being disruptive. Acei9 11:43, 31 January 2010 (UTC) 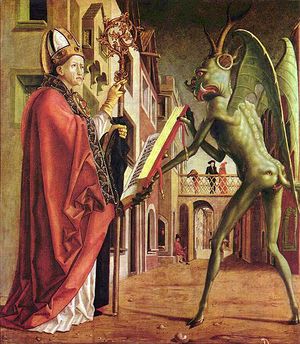 Supreme Ruler of the Wiki Trent being manipulated by Reptilian Overlord Nx.

You have the server and database passwords. That's all it takes. We all seem to agree that we need to revamp voting so that something will conclusively come out of it, so let's now work on how to do that. Wisest drug Hoover! 11:56, 31 January 2010 (UTC)
Only when they prise the royal sceptre out of my cold, dead hand. But I agree with Ace, we all have tempers - I lost mine yesterday. The problem is is that- to use an example - at present we end up with myself and ToP standing chest to chest, yelling "I'm right!" whilst fuckknuckles like MC and TK laugh at us. --Psygremlin話しなさい 11:57, 31 January 2010 (UTC)
Also, I think we rely too much on voting. We've got an idiot like MC running amok yesterday and first we have to convene a vote? I think the responsibility for dealing with things like that can be delegated. --PsygremlinPraat! 11:59, 31 January 2010 (UTC)

The other thread wherein we are discussing the problem talks about delegation in more detail. Acei9 12:01, 31 January 2010 (UTC)

I have a modest proposal![edit]

We have the Article-a-week club, which aims to start off new articles and tidy up older ones. As a fairly prolific editor at the moment, you may be interested.

At the moment my attention is being sucked up by Cryonics, which is WHUT. I swear, I'm gonna start answering every question anyone asks me anywhere, "But, NANOBOTS!!" - David Gerard (talk) 22:38, 20 February 2010 (UTC)