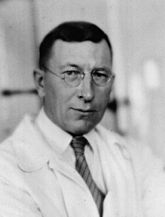 Sir Frederick Grant Banting KBE MC FRS FRSC (November 14, 1891–February 21, 1941) was a Canadian military captain, medical scientist, physician, and amateur painter. He won the Nobel laureate in Physiology or Medicine as the co-discoverer of insulin.[1] Diabetes, which may have been identified as early as 1500 BCE, was basically a death sentence for anyone who got it until Banting and his partner, Dr. Charles Best, isolated insulin and found it could be injected into a patient to control their blood sugar.[2] To this day, no true cure for diabetes has been found, but the ability to harness insulin was a major medical breakthrough in combating the problem.

Banting was born in British Canada on a farm in Ontario. He went on to study medicine after failing to get into an art school. When the First World War broke out he tried desperately to enlist. He eventually got in and was injured in battle, but continued to help the wounded for 16 hours. He was later awarded a Military Cross for his service.[3] After the war he earned his medical license.

Discovery of insulin and Nobel Prize[edit]

Fascinated by the issue of diabetes, Banting read up on the notoriously difficult medical topic for which a cure had long eluded doctors. At the University of Toronto Banting and and his colleague Charles Best finally managed to extract insulin from the pancreatic tissue of a fetal cow. Prior to this, the trypsin (proteolytic enzyme) of the pancreas would break down the insulin other scientists had attempted to extract. By surgically closing the duct of the pancreas Banting was able to prevent this process from happening and could allow the trypsin to lose its potency and eventually break down, allowing for the insulin to be extracted intact. They found that the insulin could be used in controlling the blood sugar of a diabetic dog and began seeking it from other sources while refining their techniques until it was safe for human use in 1922. In 1923 Banting was awarded the Nobel in Physiology or Medicine.[4][5]

Controversy over discovery and Nobel[edit]

One year prior to the paper published by Banting and Best on their work, a Romanian scientist named Nicolae Paulescu had also used pancreatic extract to control diabetes in a dog.[6] It is unclear whether or not he should have also received the prize because the Banting-Best serum had been purified to the point of being safe to use in both animals and humans.[7] Other researchers had also utilized pancreatic extract on animals before but with similar problems, namely dangerous side effects.

Adding to the controversy was the fact that Charles Best did not receive the reward. Rather, Banting shared it with Dr. John Macleod, a professor at the University of Toronto whom he felt was only peripherally involved and not deserving of the prize. Banting shared half of his prize money with Best.

Not done saving lives, Banting began working on physiological complications associated with high altitude flying that pilots were experiencing in the 1930s. Unfortunately, Banting suffered severe injuries in a plane crash in 1941 after reenlisting with the Royal Canadian Air force, and died the day after the crash.[8]