Snow is a form of precipitation in which the falling water starts as miniature ice crystals. 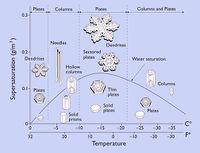 No two snowflakes are alike… unless you're talking about columns and plates, which all look alike, more or less.

Tiny ice crystals formed in clouds whose shape varies based on temperature and humidity. Shapes range from the famous six-fold radial symmetry to simple needles and columns. Thus, the claim "every snowflake is unique" and the nauseating phrase "special snowflake" is somewhat misleading. While not every six-sided variant of snowflake is unique in terms of shape, two are rarely alike.

Snow falls at a pace at least ten times more rapid than rain, depending on the temperature.[1] This makes snow very dangerous, as it can cause slippery roads. Also, it can snow when it is much higher than 32°F (0°C); it can go up into the 40s and 50s.[2]

Crazy nanomachines from the government, somehow related to chemtrails. When a chunk of snow is burned at any temperature with a butane lighter, the snow does not seem to liquefy but rather turns black and shrinks. In actuality, the melted snow in liquid form is absorbed back into the snowball and the blackness is from the carbon in butane (C4H10) attaching itself to the snowball.[3]

Snow also doesn't disprove the existence of climate change.[citation NOT needed] In the real world, climate change can cause more wild storms to occur as more water is vaporized into clouds with wind being stronger in these instances. Climate change in the Arctic additionally causes that cold air to go somewhere, which can mean it going into the continental United States. A devastating example was the February 2021 North American cold wave

, where extremely cold air punched as far as Texas, leading to over $20 billion and over 200 fatalities due to a mass power crisis, freezing temperatures and snow. [4] The Texas government estimates nearly $200 billion was caused in the disaster. [5]

The word snow is a slang word for cocaine, a dangerous and usually illegal drug that appears as a white powdery substance. Real snow has no physiological effect other than to chill whatever flesh with which it comes in contact and hurt people's eyes when the sun's harsh enough.

Usage as a snarl word[edit]

See the main article on this topic: Snarl word

People on all parts of the political spectrum, though more associated with the (extreme) political right (especially the alt-right), frequently call their opponents "snowflakes" or "special snowflakes" to insult them, particularly mocking their perceived over-sensitivity and inflated sense of "special treatment". This snarl word plays on the partially-true idea that "no two snowflakes are alike". As with most snarl words, this ubiquitous term has lost all power, and it just sounds dumb, as if being unique, symmetrical, cool, beautiful, and coming in different shapes depending on the temperature is a bad thing.

At times, the use of the snarl word can seem like a form of psychological projection, such as when conservative regions try to ban prize-winning books that deal with difficult subject matter from school curricula (e.g., Art Spiegelman's Maus, and Toni Morrison's The Bluest Eye).[6]

", which are known for bruising easily; they view the younger generation as spoiled, lazy, selfish, and unable to get off their lawns. This is as asinine as the "snowflake generation" moniker toward millennials and younger, as Taiwan's youth, as in the United States, are facing the increasing problem of increased work hours and stagnant minimum wage.[7] And, circling back to the original topic: climate change.