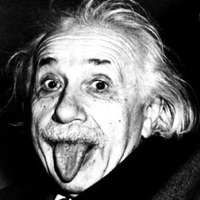 Due to liberal propaganda, he was considered as a genius during much of the 20th century. In 2011, an experiment involving neutrinos proved that he was a fraud all along. Or if it wasn't a fraud [2] it was to do with the New World Order or something.

He is famous for formulating the special and general theory of relativity, which is a liberal term for relativism. Relativism means that you agree with abortion because you think that killing a baby is not as bad as the death of an elder. Einstein wrote some things about time warp to support baby murder: according to Einstein, you can be older than your twin, which means there is no absolute chronological standard to measure "real" age. All of that was written only for the purpose of murdering babies.

Einstein worshiped lightspeed, which, in his eyes, had to be constant, untouchable. This was obviously a way to deny the all-mighty Godspeed.

Einstein thought that the speed of light did not depend on the direction. Later, professor Maurice Went proved that the light used in experiments that confirmed Einstein's views was made of Jewish photons. Maurice Went proved that honest, Christian photons have different speeds because they know they are slower than Godspeed. You can recognize Jewish and Christian photons by studying their polarization.