David Cameron. This is an actual photograph of him, taken in 2012. The text and explosion kinda floats around behind him at all times, but the pink dress he saves for the weekends.

David Cameron is an old Etonian,[1] but don't hold it against him. Much. After all, George Orwell was too, although he was a Labour supporter.

Cameron is generally thought of by his opposition as a typical Tory toff and a Thatcherite at heart, despite Cameron's claims to the contrary that he is a "progressive conservative."[3][4] After winning the party leadership in December 2005, he "stepped up his modernisation drive," indicating to move away from the old Tory platform of standing up for big business, scrapping (subsidised) private healthcare, and generally part from Thatcherite principles.[5] Having actually achieved power, his party unveiled a series of Thatcherite policies intended to stomp on those at the bottom of the social pile for the benefit of those at the top. He has also placed emphasis on his Party's previously invisible environmental credentials[6] by cycling to work while a car carrying his papers follows him.[7] His stated desire to "stand up to big business" began with opposing a law that would make businesses more socially and environmentally accountable.[8]

One of his policies that he apparently has great passion for is the Big Society which is another way of saying he wants a small government to save money whilst the people (or as he would call them, dirty commoners) get screwed over. This will help British arts and literature, so the next Charles Dickens won't be short of material. 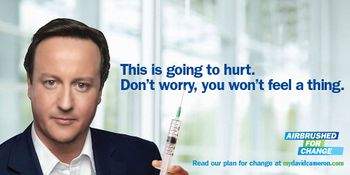 He is so slippery smooth that he will be used as the bobsleigh by the British team at the next Winter Olympics.[citation NOT needed]

He has discovered something that was unknown to the rest of the universe: "people don't like paying taxes"; and makes a lot of noise on the subject.

Another wizard scheme is getting Tory MPs, many of whom left school before colour television came out, to get themselves more with-it by signing on to social networking websites.[9]

Robert Mugabe supported Cameron for Prime Minister.[10] No word from Charles Manson or Adolf Hitler as yet. Just sayin'. Mind you, Muammar al-Gaddafi who made Mugabe look like a boy-scout endorsed Barack Obama so sticks and stones.

If one is to believe Steve Bell of the Grauniad, Cameron bears an uncanny resemblance to a fish in a condom. Or, to Charlie Brooker, a lizard.

Much like Tony Blair, his main contribution to his party achieving power was wearing a fixed smile and not saying anything too draconian while the other party fell apart. This policy worked until the 2016 Brexit referendum when his own party fell apart, and he decided to fuck off to his shed for the next few years while the entirety of Britain fell apart.[11]

He will most likely be remembered as either "that PM who fucked a pig" or "that PM that destroyed the United Kingdom on a political gamble for short term political gain."

The Three Laws of Cameron[edit]