From RationalWiki
(Redirected from Environmental)
Jump to navigation Jump to search

Environmentalism is the philosophy that the Earth is like a ship far out in the middle of the ocean, and if there's a fire we should make an effort to put it out on the grounds that we have nowhere else to go. Environmentalists are often called Greens. They are fundamentally opposed by the Grays who believe the Earth is like a front yard in the middle of New Hampshire where we can just let the grass grow up to hide/shade the sleeping dogs and leave a bunch of parted out cars laying around leaking oil and transmission fluid, and any effort spent trying to raise the planet's "curb appeal" is socialism and reminds them of when their mothers told them to clean up their rooms. Besides, Jesus is coming any minute now, to clean it all up for us anyway.

Several causes of the environmental movement are genuine:

It is often difficult to accurately assess how one can best protect the environment. To understand how sustainable a specific product or process is with regards to environmentalism, researchers commonly deploy life-cycle assessments.

Environmentalism is a necessary response to a negative impact of human activities on nature, but it has occasionally been a realm in which much pseudoscience and woo has flourished unchecked. Science-based environmentalism, based on study of biology and ecology and the formulation of appropriate and effective public policy to curb and mitigate human impacts on same, can be contrasted with such woo as:

Unfortunately, much of the woo has flourished within popular culture even as serious, science-based environmentalism has also flourished. Sorting out the difference can sometimes be a snipe hunt.

See the main article on this topic: Anti-environmentalism

Denialism is a different sort of environmental woo, pretending environmental issues don't exist in the hope they will go away. It is a double-edged sword; on the one hand, it is an appropriate label for an irrational refusal to confront the reality of environmental problems, but it can also be a club used to unfairly class legitimate dissenters in with the more abhorrent Holocaust deniers. 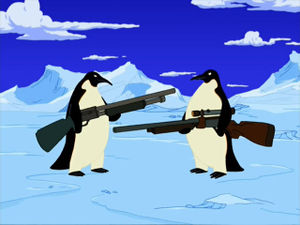 Don't fuck with them.

See the main article on this topic at Wikipedia: *List of environmental organizations

(Some of which may solicit you for additional money for the rest of your natural life if you send them $5.)