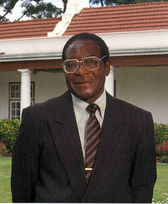 You wouldn't depose a guy with glasses, would ya?

Robert Gabriel Mugabe, aka. "Comrade Bob" (February 21, 1924–September 6, 2019) was the crazed dictator of Zimbabwe. A leader of the movement against white minority-rule, he became head of government when the country gained de jure independence[note 1] in 1980 in an imperfect (but not horrendous) general election.

At first, his economic policies led to reasonable growth rates and his policies massively decreased child malnutrition and infant mortality rates. However, things didn't work out so well for the dead 20,000 Matabeles. In 1987, he became Head of State after the adoption of a constitutional amendment establishing an executive presidency, an institutional role created for him. Descending over decades from a democratically-elected leader to a mad tyrant, he began to chip away at democracy. The previous system of separate voting rolls for the black majority and ethnic minorities, seemingly a good measure in the near term, would eventually allow him to stop ethnic minorities from voting. He abolished the Senate, and increased the size of the lower house to include his appointees. Always having support in a single legislative chamber would, in the end, make him far more powerful than having two houses to control.

What motivated Mugabe? He consistently justified his tyranny in terms of anti-colonialism and Pan-African nationalism.[1] The answers that analysts offer range from his early years as a fatherless child doted on by his mother,[2] to his indoctrination in conservative Roman Catholicism and fear of prosecution.[3]

He was forced to resign in November 2017 by his own government, ending his decades-long rule.

Amnesty International has condemned his brutal regime and his violent tactics. In his desperation to hang onto power, Mugabe jailed or killed opposition politicians and human rights workers. There is a whole body of evidence pointing to extrajudicial executions‎ and torture of journalists, opponents and activists. Opposition gatherings were frequently subject to brutal police attacks. Mugabe cracked down on fair elections, with massive electoral fraud and violence against opponents.

From 2001 to 2006 the Zimbabwe Human Rights NGO Forum has recorded 363 cases of torture, 516 cases of assault, 58 cases of death threats, 399 cases of unlawful arrest and 451 cases of unlawful detention, all by law enforcement bodies loyal to Mugabe. Many of these incidents include multiple victims. Since 1987, Mugabe had tightened laws against homosexuals, often making public speeches targeting gays as being "un-African" and "colonial." In September 1995, Zimbabwe's parliament passed legislation outlawing homosexual acts. The charge of sodomy is used to bring down political opponents, including former president Canaan Banana in 1996, who ended up serving 10 years in prison. British gay activist Peter Tatchell, appalled at the human rights abuses in Zimbabwe, attempted to make a citizen's arrest of Mugabe in Brussels in 2001 and was subsequently brutally beaten by Mugabe's bodyguards, causing Tatchell permanent injury. In 2013 Mugabe used a rally before thousands of people to order the decapitation of gay men.[4]

Due to Mugabe's efforts, everyone can be a trillionaire!

Mugabe was incensed by the fact that huge parts of the country's land was owned by white farmers, while the black majority were not significant landowners. In response to this he began a "land reform" policy which involved sending paramilitary groups to seize farms from white farmers, encouraging them to engage in murder and particularly nasty forms of torture. However unfair the land distribution had been beforehand, the fact is that these farms had been quite productive and their owners knew what they were doing. The land did not go to black farmers—indeed, many of them who had worked with or under white farmers received similar treatment during the illegal seizures—and instead went to his cronies. Unfortunately, it turned out that his cronies weren't qualified farmers, and a country which once had a food surplus was soon plagued by violence and poverty. The country is also facing a huge AIDS crisis, with an estimated quarter of the population infected.

When the farms began to massively under-perform because of his policies, and with other areas of the economy performing poorly, Zimbabwe's tax receipts fell substantially. Instead of cutting spending, increasing taxes, cutting corruption or borrowing money, the Mugabe regime insisted on printing enough to meet their expenses. This, of course, made inflation spike. Rather than cut back on printing money, the state continued to do so, and instead put in place price controls enforced by the police. Instead of keeping prices down, police merely bought everything at the artificially low prices and resold it on the black market.

The currency is now essentially worthless, with an inflation rate calculated at 6+ sextillion (1021) percent.[5]

Zimbabwe's 2008 presidential election was an excellent example of how much control Mugabe had stolen in order to make himself president for life of Zimbabwe. Through power over the authorities and his heavy-handed political chicanery, the election became confusing and violent as people were arrested by the hundreds, and the opposing party was severely suppressed. Morgan Tsvangirai, leader of the opposition party Movement for Democratic Change, was forced to flee to the Dutch Embassy for a while because of the danger and confusion. In the end, Mugabe was sworn in as Zimbabwe's president for a sixth term, continuing his regime and effectively turning the election into a complete sham as there was no-one for him to run against.

Reaction has been muted. Most Western countries have condemned Mugabe's policies, but fear being too hard on him, since he is revered as an anti-imperialist hero by the other rulers in sub-Saharan Africa. At a July 2008 meeting of the African Union, Mugabe was welcomed with the warmth to which he is accustomed.

He insisted he would run for president again at 92, and also stated he would never retire, and would stay in power "until God says come".[6] It's an open secret in Zimbabwe that Mugabe had been undergoing blood transfusions for years. That explains Mugabe's unbelievable longevity-it slowed his aging.[7]

Mugabe's attempt to purge the ZANU-PF of members standing in the way of his official successor, the military-backed Vice President Emmerson Mnangawa,[8] led to the military seizing control over the capital city of Harare on 14 November 2017,[9][10] with Mugabe placed under house arrest[11] and the fate of his wife left unknown.[12][13] After a period of opaque uncertainty he resigned, with his successor saying he had done so willingly in exchange for immunity to prosecution and Mugabe claiming he had been forced to step down illegally and was still the rightful president. However, he had no capacity to act on this rhetoric and was already in declining health, so he died about two years later living on a stipend from the government that overthrew him, the money drawn from the country he first liberated and then promptly ruined. Poetic, is it not?

Unfortunately his successor was just as despotic.

However, many still believe that economics and other social phenomena are not merely soft sciences, but pseudosciences that are entirely manipulable by a sufficiently dedicated hand. That Mugabe continued to blame Western imperialists, rather than his own insane policies, shows that he'd never listen to reason. It must be understood that these laws are just as strong as the law of gravity.[note 2]

Mugabe and his family were implicated in a WikiLeaks document of profiting from the sale of "blood diamonds" from Zimbabwe. These blood diamonds, also called conflict diamonds, are being mined from the Marange mine fields in Zimbabwe, a site that lost its Kimberley Process (KP) certification in 2010 after reports of forced labor and other human rights violations reached the Israeli Diamond Exchange, the group that issues KPs. The WikiLeaks cable showed that Mugabe's family were profiting from the smuggling, as well as a string of top officials in Mugabe's ZANU-PF party named as active participants in the venture, paying for gems with freshly printed Zimbabwe dollars and reselling them for more valued US dollars.

Tyranny and corruption mean fewer friends rather than no friends in international affairs. Beginning in 1981, advisers from the North Korean People's Army trained the Zimbabwe National Army's Fifth Brigade, which then conducted a series of massacres in Matabeleland from 1982-1985. Matabeleland is home to the Ndebele-speaking minority who have opposed Mugabe's ZANU in general elections. As a reward, North Korea got a bunch of animals out of that deal,[14] mostly because Zimbabwe couldn't afford anything else. Mugabe was free to commit his crimes, in part, because of his friendship with South African President Thabo Mbeki.[15] Unlike his predecessor, Nelson Mandela, Mbeki proved more of an African nationalist and thus more willing to indulge misrule In Zimbabwe. In time, however, there were signs that Jacob Zuma, then-President of South Africa, was ready to distance Pretoria from Harare because of human rights violations and authoritarianism in Zimbabwe.[16]