Pretty!
Not to be confused with incest, which people find disgusting for a different reason.

Insects are scary smallish critters, with six legs, three body sections, exoskeletons, and sometimes wings. They are arthopods, like crustaceans and arachnids (the latter of which has some species that are often mistaken for insects, like ticks and spiders, which have eight legs and not six).

Insects are likely to be on the earth when man has become extinct.

The study of insects is called entomology and is not to be confused with etymology - although that field of knowledge informs us that in British English a bug is a kind of insect, while in American English an insect is a kind of bug. 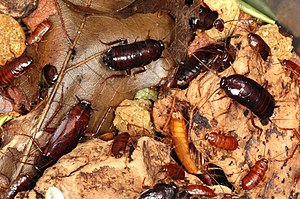 Everybody hates bugs.[1] (Except entomologists, but they don't count.) But why kill them? Just 'cause you hate something is no reason to kill it. You hoser. Take off, eh?