From RationalWiki
Jump to navigation Jump to search
This article covers genetically homogeneous breeding amongst humans. For plants and other animals, see inbreeding.

Incest is the activity of people having sex with close relatives. It's opposed by just about everybody[notes 1] — including most liberals/atheists/skeptics/rationalists and fundamentalists — although the reasons vary from the adverse effects of incestual reproduction, to "God forbade it", to personal disgust, which overlaps with other historical sex taboos.

An additional problem with most anti-incest arguments is that they tend to focus only on procreative sex (that's not even starting on the ethical question of eugenics), ignoring the likely possibility that many incestuous couples don't want, or even can't have, children (like gay couples, or those that use birth control). Humans do in fact engage in recreational sexual intercourse after all.[citation NOT needed] Hence, the genetic argument against marriage between relatives represents a false dichotomy.

Incest is quite common in Greek mythology. Zeus, the king of gods and men, and his wife, Hera, the white-armed queen of heaven, are siblings. Oedipus Rex is a tragedy involving incest. In the Abrahamic religions, Adam and Eve (the first humans) had offspring who reproduced with each other, namely Cain and his sister.[1] This means that God necessitated the first instance of incest by requiring it of Adam and Eve's children. Abraham also practiced incest with his half sister Sarah (Genesis 20:12), and there would have been a substantial amount of incest going on after the Flood since all of humankind that remained was a single family.

Most of the USA, all of China and one or two other countries are strict in their incest laws in not permitting first cousins (those possessing at least one common grandparent) to marry. 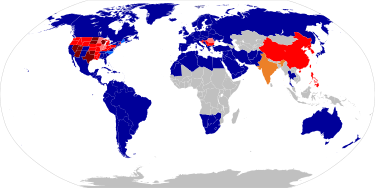 Laws regarding first-cousin marriage around the world

The biological result of too much incest based reproduction can be the manifestation of normally rare and undesirable diseases, named Autosomal Recessive Disease. Said diseases require two recessive genes, but with a dominant gene, these diseases are otherwise unexpressed.[2]

In the instance that two people who both a have a recessive disease gene (but aren't inflicted with it) reproduce, the chance of passing on only one copy of the gene to the offspring is 50% and obtaining the disease is 25%.[3] This can be observed in the Punnett square below:

In the case that two humans produce an offspring and one has a recessive gene for a disease and one does not, the chance of passing it on is still 50%; however, the chance of the offspring having the disease is zero. This can be observed in the Punnett square below:

Why is this important? Because following from the second square, if one parent has a single copy of the recessive gene, there is a 25% chance a boy and a girl born to the parents will both carry the gene. If the incidence of that gene in the general population is, say, 1%, you can see that the siblings, if they copulate, are at much greater risk of having a child born with the disease than if they mated with strangers.

For each recessive gene carried by a parent, there is a 25% chance that both siblings will inherit it, and a 25% chance both siblings will pass that gene on to their child if they had one, thus in total there is a 6.25% chance that the child will be born with whatever defect the recessive gene caused. Now remember that most adults actually carry many of these deleterious (aka bad) Autosomal Recessive genes, [notes 2] with any child conceived by siblings facing a 6.25% chance of being born with a disease for each received gene carried by either of the sibling parents, and the odds of a child born from incest with immediate family members being born with some sort of disorder become unfortunately quite high.

As a matter of reference in the case of first cousin matings, there is a 1.5625% chance of a child being born with a defect for each deleterious Autosomal Recessive gene the shared grandparent had. This means that first order cousins having children is only 1/8 as dangerous[notes 3] as matings with immediate family (siblings or parent/child) in terms of risk of the child being born with one of these recessive disorders. For reference, the rate of birth defects for children of first cousins is about the same as that of two unrelated people with a woman naturally conceiving in her early 40s.

Debuted in an experiment conducted in 1994, the "smelly T-shirt" test illustrates humans utilize their sense of smell to determine a mate.[4] From the study, it was concluded that women were more attracted to "men who were most genetically different from them".[5] A study from 2006 showed genetically similar partners to be more likely to cheat. These studies conclude that genetic difference indicates the overall satisfaction and compatibility of partners.[6] These mechanisms evolved into humans to increase the chances of genetically different mates producing offspring to help maintain a genetically diverse population.

To make this more complicated, there is also the (possibly pseudoscientific?) concept of genetic sexual attraction

, which is a sort of accidental side effect of genetics that causes an individual to be genetically predisposed to finding someone who shares their genetics attractive.[notes 4] To prevent this potential attraction from leading to incest, the Westermarck effect

evolved, which ensures that anyone you grow up with during the first 6 years of your life will not be attractive to you. Since a child usually grows up with their immediate family, this will ensure that they will never develop a sexual attraction to those family members. Adult siblings meeting for the first time after being separated at birth, who are not 'inoculated' against the genetic sexual attraction by the Westermarck effect, often report developing an attraction to the sibling as a result[7][5].

Whether or not the same thing that works with plants could work with humans is very much open to debate, but some hereditary diseases have a higher occurrence in some populations, and as such, children with diverse ancestry have a lower chance of suffering from them.

Incest is frequently a form of abuse or pedophilia, as the most common occurrence is between siblings (an older sibling preying on a younger) or between a parent and a child. A reasonable explanation for pedophilic incest being common is the accessibility of the victim. Both boys and girls can be the victims of this sort of incestuous abuse by a family member. The perpetrators, whether the victim is boy or girl, are overwhelmingly likely to be male.[8]

Other twists to have in mind[edit]

Something to point out are notorious cases in the world where two persons met each other, fell in love, got married, but discovered later on with DNA tests that they are in fact genetically related (most often as siblings who were separated and adopted by different families early in their lives). While this implies they have a higher than average chance of conceiving a biological child with genetic defects, it doesn't erase the times they bonded together, and as a result, the way they view each other, as lovers.

One last idea is that "incest" does not necessarily indicate pedophilia (underage members with an adult) nor rape (one side is not consenting). One should keep that in mind when discussing the idea of incest itself, so as not to confuse or associate it with sexual harassment or violating one's body or lack of Informed Consent.

Incest between close relatives is illegal in most countries. The European Court of Human Rights has decided that individual nations of the European Union may enforce laws against incest. [9] Sex between adult brother and sister is legal in many countries of the EU and in some states of the USA.[10]

Western society generally considers inbreeding among humans to be distasteful, most countries having criminalized incest. Inbreeding in the form of sexual relations between direct blood relatives is rare, although isolated communities may fall prone to inbreeding if discouraged to marry outside of their small social group. Immigrant communities, and those practicing a self-imposed isolation from the surrounding culture, are a commonplace source of marriage between blood relations, most commonly cousins.[11]

People living on the remote island of Tristan da Cunha are descended from 15 people, all of whom arrived between 100 and 200 years ago. As a result, there is a fairly high prevalence of genetic disorders. There are an elevated number of people with glaucoma, and in particular there is an exceptionally high rate of asthma. The latter led to scientific inquiry which uncovered the genetic nature of asthma, as three of the original settlers had it.[12]

Genetic abnormalities are more pronounced in the Arab world, due to the more commonly accepted intermarrying of blood relatives, most commonly between first cousins. Many Arab societies are tribal in nature, thus combining isolationism and the need to keep it in the family.[14]

The stereotypical inbreeding within small towns and redneck societies was parodied in the Mel Brooks movie, Blazing Saddles. Most of the residents of the fictional town, Rockridge, share the surname "Johnson", and were incredibly dumb - and initially bigoted.[15]

The English county of Norfolk is, at least comedically, notorious for inbreeding. A UK MP said, regarding the high incidence of diabetes there: ""I would imagine it is linked to the fact that people in Norfolk are quite inbred, with many not leaving the county"[16] (He later apologised).[17]

Then there's Iceland wherein the government sponsored the The Islendiga-App,[18] which was designed to help members of the Island's small population make sure they're not too closely related to their romantic partners.