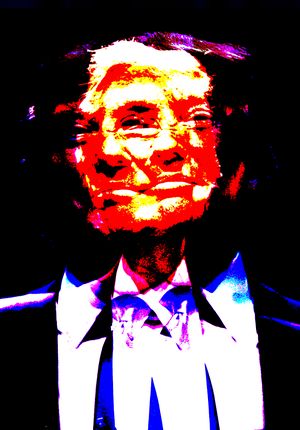 He is also, at time of writing, President Elect of the United States of America, which is either great/not so great/a harbinger of the apocalypse.

Although this editor would prefer to say he 'may/may not' be President, in all likelihood, as at time of writing, he will in fact occupy the highest office in the United States Government, including responsibility for firing/not firing off a range of Intercontinental Ballistic Missiles. This may/may not be causing profound levels of anxiety across planet Earth and large numbers of inquiries about immigration to Canada.

Donald J Trumps noted Quantum states includes a range of issues and statements that he may/may not have made, may/may not agree with, and contains a series of proposed actions he may/may not perform when he does/doesn't ascend to the position of President of the United States of America.

There is some speculation that Trump's brain may be in two quantum states that are added together to create a 'superposed' thought state, where he no longer knows what he thinks, when he thought it or what it means, but is certain afterwards that he both understood and has always thought what he now thinks, unless he doesn't.

Schrödinger, if he was alive/dead, may/may not have coined the German term "Was zum Teufel geht?" in considering the potential outcome of this Super Trumpian Condensate State

As evidenced by his assumption that any article referencing him, is, by its very nature of referencing him, a positive reference, any mention of [[misogyny[[/racism/poor taste/fascism/hair may/may not lead to a brief Twitter reference praising the source. He even likes Michael Moore.