An artist's impression of the brain.

The brain is the chunk of fat that sits at the terminus of the central nervous system and helps coordinate sensory input, motor activity, and behavior. Most animals have something similar to a brain, though the level of complexity differs greatly across taxa. We all have a brain (well, most of us anyway

), but only some of us think with it.[citation NOT needed]

In humans the brain is involved in thought, emotion, desire, action, choice, memories, and sensory processing. Other parts of the nervous system can do some basic preprocessing and all parts are needed, but the brain is in charge. Many people believe that the mind is not totally reducible to the brain.[1] This idea is rejected by most neurologists as unscientific and unnecessary to explain the function of the mind.

Basic anatomy of the human brain[edit] 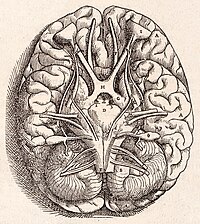 The base of the human brain as illustrated in 1543.

The first part to understanding anatomy is to understand directional terms. There are three axes: top to bottom, front to back, and left to right of center. The top is referred to as dorsal, the bottom as ventral(sometimes superior and inferior as well). The front is anterior and the back is posterior, while those areas in the center of the brain are medial and those moving to the left or right side are lateral.

The human brain is anatomically referenced based on several distinct and universal features. The most notable is the medial longitudinal fissure, which is a wide gap that separates the brain into two hemispheres (right and left). Moving from the middle of the fissure down the sides of the brain is the central sulcus. From the side view of the brain, another sulcus (or gap) can be seen just below the central sulcus, running from the bottom front to about halfway back. This is the superior temporal sulcus.

s are the primary cells that form the brain and the rest of the nervous system, with a number that in humans is 10-20 billion in the former plus another 55-70 billion in the cerebellum

. They are accompanied by similar numbers of support cells

, whose functions include structural and metabolic support, insulation of neurons producing myelin sheaths, immune response, and tissue maintenance among others.

See the main article on this topic: Human brain size 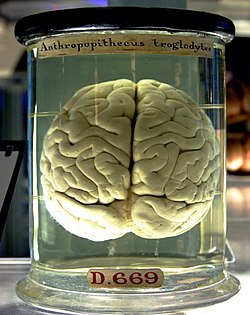 The brain of some unfortunate chimpanzee.

Carl Sagan suggested that the advent of Caesarean sections and in vitro fertilization may permit humans to evolve larger heads,

resulting in improvements via natural selection in the heritable component of human intelligence[2] However neurological functions are determined more by the organization of the brain rather than the volume, Neanderthal cranial capacity for females was 1300 cm3 and 1600 cm3 for males,[3] while among modern Homo sapiens, northern populations have a 20% larger visual cortex than those in the southern latitude populations, and this potentially explains the population differences in brain size (and roughly cranial capacity).[4][5] Either way, gigantic heads remain a long standing cliché for abnormally intelligent characters in science fiction. Fan et al. found a more complex pattern, noting: "Crania of African ancestry tended to have a narrower cranial base, and those of Northern European ancestry had elongated occipital and frontal regions. Crania of East Asian ancestry had a high cranial vault, and crania of Native American ancestry were flatter."[6]

Evolution of the human brain[edit]

The human brain has several unique features, most notably a massively expanded frontal lobe and significant anatomical specification throughout the frontal lobe tissue. Other areas linked to language processing are also highly developed. This massive expansion of the frontal lobe does not seem to coincide with any immediate changes in survival skills for the human species. Many early hypotheses for the evolutionary pressures leading to this expansion (such as hunting, tool making, or language development) did not coincide temporally with when the expansion took place. Most current hypotheses focus on this expansion as being driven by social navigation or even sexual selection.

Unused part of the brain[edit]

A lot of woo (and science fiction) centers around the idea that 90% of the brain is unused, and we could perform amazing feats if we could tap into it. Sadly, as awesome as that would be, we're pretty much using all we've got.[7] One simple refutation of the myth is that if it were true, we could lose large chunks of brain without impairment, which is most certainly not the case. Not to mention that evolution would select against having this unused 90% sitting around, eating up oxygen and nutrients and making childbirth that much more painful and dangerous, unless there was a tangible benefit rather than a potential one. Many of these ideas specifically center on using 100% of your brain all at once to make these superhuman feats attainable. People who actually have some knowledge about this subject will recognize that some people really do this already, and that the medical term for it is a generalized tonic-clonic seizure (also known as a grand mal seizure); this is clearly not a higher form of thought, and is in fact a highly dangerous and sometimes deadly occurrence.

The gut microbiome has an effect on brain functioning, including various social, emotional and anxiety-like behaviours.[8]

The brain and modern toys[edit] 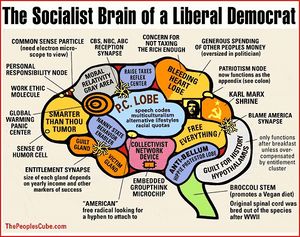 Real brain scans, unfortunately, aren't this simple or conclusive. We can conclude, however, that this brain is made out of straw.

A new era in understanding how the brain creates thought has emerged with the development of several new toys. We now have the ability to non-invasively image the anatomy of the brain and functional activation of brain areas, measure cell firing rates, and even change the firing patterns of brain areas. Sadly, we still haven't figured out how to read minds completely without technology.

Magnetic Resonance Imaging uses a strong magnetic field to align the magnetic fields of hydrogen nuclei in the body. Applying radio-frequency radiation distorts this polarisation, and as the nuclei return to their original lowest energy state they emit further radio waves that can be translated into an image. Different molecules emit different energy patterns and so different things can be imaged from the same machine.

The most common molecule to be imaged is water and fat, as these are the most abundant in the body, providing good, clear images of the anatomy.

Functional Magnetic Resonance Imaging works the same way as any MRI, but instead of water the machine is calibrated to measure blood. It is theorized that brain areas that are undergoing increased activation will also have a corresponding increase in metabolic requirements. The need to provide oxygen to these areas will increase the blood flow. Thus the fMRI measures the blood-oxygen-level dependent (BOLD) signal.

The BOLD signal is often superimposed on an anatomical MRI. This allows figuring out which areas of the brain seemed to be activated at a particular time.

Transcranial Magnetic Stimulation is the “black art” of neuroscience. Essentially, a large coil has an electrical field pulsed through it, which (supposedly) can be used to temporarily change the firing patterns of neurons in the brain. It is not clear whether the TMS acts to excite or inhibit brain activation (or even do both). Effects from the TMS can last as long as 12-24 hours after application or as short as a few minutes. 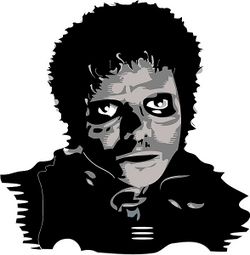 There's good eating on a brain. While it is socially unacceptable to eat a human brain — unless you are Hannibal Lecter, a Conservapedian (providing it's your own brain), or a zombie[Note 1] — the brain of a cow, pig, goat or, in some exotic locations, a monkey, can make a nutritious meal, although it's relatively tasteless by itself (to the extent they have any flavor on their own, it's vaguely like scrambled eggs with a much more mushy texture) and is rather high (as in 1000%—1500% of recommended daily intake per serving, depending on the animal) in cholesterol. Problematically, ignoring social constraints and eating human brains can cause kuru, a prion disease similar to Mad Cow Disease, while eating the brains of cows and sheep, and possibly also pigs etc. can cause actual Mad Cow Disease, or just cause heart attacks.

The immense similarity in reactions between creationists and zombies is, frankly, appalling, and not worth repeating.[Note 2]

Neuroscience is the scientific study of the nervous system.

Throughout history, changes in behaviour have been noted in people who receive injuries to the brain, but in recent decades technology has allowed for scientists to actually study why this is.

Learning how the brain develops and functions can lead to treatments and preventions of neurological disorders such as Parkinson's and Alzheimer's.

Such treatments may be possible through stem cell research, which is controversial when it utilizes embryos.

Even folksy generalizations about neuroscience are useful to the average person because: (1) the brain and nervous system are amazingly complex; (2) research is on-going; (3) findings by investigations have enormous consequences in terms of understanding ourselves, human culture, and the evolution of "reason" and "religion"; (4) we never learned this stuff in high school, and (5) the learning curve needs to start somewhere. But when the learning curve stops, the woo begins. Topics with enormous potential for enlightenment and mischief are the following:

It's a relatively common to handwave pseudoscienctific assertions about human nature as being backed by neuroscience: keep an eye out for direct references to actual scientific papers that use observational evidence, whose claims tend not to be quite so grandiose. To see examples, try searching the internet for the phrase "Neuroscience says that". You can find all sorts of generalizations that have no real basis, like:

Usually these kinds of claims come from someone who's trying to sell you something.

The topics below are not accredited science.[edit]