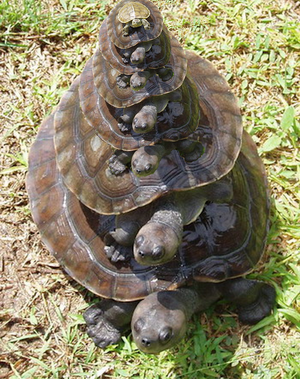 Hey! That's not very far down!

Scientific Geoterrapinism is the obviously nutty SCIENTIFICALLY PROVABLE theory that the Earth is flat and on the back of a giant turtle.

Of course, notorious heretic Terry Pratchett points out that we're talking about a turtle, not a tortoise, and therefore it needn't actually be standing on anything. Instead, the world-turtle could simply be swimming through the void.

That does raise the question of why we needed the turtle in the first place, since the world itself could be simply floating through the void on its own.