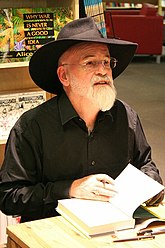 His best known books revolve around Discworld, a world controlled by numerous gods, where magic and narrative causality take the place of physics, where a million-to-one chance is always a sure thing (but not a million-and-one-to-one chance, because that'd just be silly). Discworld is supported in space on the backs of four elephants, which in turn stand on the back of the Great A'Tuin, a gigantic turtle swimming through the vastness of space. Starting with The Colour of Magic, the series features such characters as a scythe-carrying Death and a deadly piece of luggage with legs. Unseen University - named after the Invisible College, the forerunner to the Royal Society - is where wizards receive their training in magic, or specifically, how to not use magic, as Pratchett himself found the concept fundamentally boring so took a more satirical stance on the traditional world of spells and sorcery.

His earlier works, such as The Colour of Magic and The Light Fantastic were straight parodies of the fantasy genre. However, as his writing matured he began to parody other genres, within a fantasy setting; these included: mysteries, crime fiction, political fiction (The City Watch series), horror (Reaper Man), sports fiction (Unseen Academicals), action/adventure novels (The Last Continent, Reaper Man), westerns and a little bit of hacker fiction (Going Postal). More importantly, his novels changed from being largely parodies to being satires as well, taking on a wide variety of subjects with incisive wit and humour. Topics touched upon in his later works included rock music and the price of fame, "headology" (folk psychology), "lies-to-children", technological development, engineering, startups, war, diplomacy, the essential con trick behind fractional reserve banking, the operational independence of the police and the judiciary, corporate corruption... all without being the least bit boring or heavy-handed. The number of hidden allusions in his works to other cultural works and real-world events is remarkable. 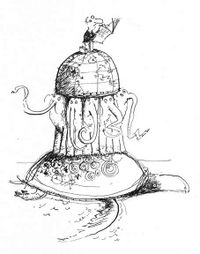 People think that it is strange to have a turtle ten thousand miles long and an elephant more than two thousand miles tall, which just shows that the human brain is ill-adapted for thinking and was probably originally designed for cooling the blood. It believes mere size is amazing.
There's nothing amazing about size. Turtles are amazing, and elephants are quite astonishing. But the fact that there's a big turtle is far less amazing than the fact that there is a turtle anywhere.[1]

It is not impossible to say that the Discworld series was one of the influences absorbed by the author of the popular Harry Potter series, and may well be one of the most influential fictional series of all time. At least the most influential without a multi-million dollar movie franchise based on it (there are a few made-for-TV adaptations and cartoons, however), which may or may not be a good thing. One of the earlier Discworld books centered around a young child entering into a school for wizards, but Pratchett didn't think there was a future in basing a book series around a wizard boarding school.

Mr. Pratchett also wrote, along with Neil Gaiman, the only nice and accurate description of the coming Apocalypse under the title Good Omens. To date, Mr. Pratchett is the only author to have spoken directly with Death, and on further examination has deemed him to be a sensible fellow, if not with a dark sense of humour.

Science of Discworld is a quadrilogy of popular science books, first published between 1999 and 2013, written by Terry Pratchett in collaboration with mathematician Ian Stewart and biologist Jack Cohen. Each book includes a Discworld-based story by Pratchett interwoven with chapters on real world science by Stewart and Cohen.

Each book has the recurring theme of looking at the origins of the Universe, the Solar System and life itself. The focus throughout is on explaining how scientific theories and methods work, and how common misconceptions about science arise. As one book says, "shouting at the monkeys in the next tree, that's what our brains were evolved to do; not mathematics and physics!" One of the major recurring themes, even stated as practically the "motto" of the series is "people think in stories". This is related to the shouting at monkeys idea in the sense that people really don't think in terms of facts or figures but weaving narratives. Narratives have characters, sides, aims, intentions and countless other implied features that don't necessarily exist in reality. This realisation has a profound effect on understanding why people believe what they believe and why they often act irrationally.

The first book, The Science of Discworld (ISBN 9780091865153), covers the origins of the Universe, Earth and life. The second book, The Globe (ISBN 0091888050), concentrates mainly on history and the development of modern society. The third book Darwin's Watch (ISBN 0091898234), concentrates on evolution with the Discworld-based story following wizards as they attempt to get Charles Darwin's On the Origin of Species written. The fourth book, Judgement Day (ISBN 9780091949792), examines the role of religion in people's lives with the Discworld story revolving around a fundamentalist Omnian sect.

Terry Pratchett was also a figurehead of a campaign to save the orangutan. The librarian of the Unseen University is a wizard who was changed into an orangutan in one of the accidents that frequently take place among the careless and somewhat incompetent university wizards. Uniquely, the Librarian has no wish to be returned to human form and has gone to considerable lengths to ensure that such can't happen.

News was released on 12 December 2007 that Terry Pratchett was suffering from Early Onset Alzheimers. Following his diagnosis, he made notable monetary donations and worked to aid Alzheimers research. He also became an outspoken supporter of assisted dying, giving an impassioned speech on the subject (albeit via his friend Tony Robinson) entitled "Shaking Hands With Death" for the 2010 Richard Dimbleby Lecture.[2][3] Following this, he also worked on a documentary about assisted suicide for the BBC entitled Choosing to Die that televised the death of a man who took his own life in the Swiss Dignitas clinic.[4] The film attracted some manufactroversy from opponents of assisted suicide, claiming that televising both the documentary and the lecture amounted to extreme pro-suicide bias on behalf of the BBC.[5]