Einstein, Mozart, Da Vinci, Asclepius, Gandhi: they all endorse Geniocracy. Of course, we can't actually ask any of them, but I'm sure they probably would.

Geniocracy is a hypothetical form of government where candidates for office and also the electorate meet a certain minimal criterion of intelligence. Framework for the system was originally proposed by Raël in 1977. As laid out in the book Geniocracy (originally published in French as La Geniocratie in 1977, but its contents have likely been updated in the 2008 English version), the end goal would be establishing a one world government, composed of geniuses (sorry, genii), elected by those of above average intelligence. The government would prioritize stopping individual and mass violence, replacing the right to work with the right to fulfillment, and saving humanity from destroying itself.[1]

Raël considers modern democracies "mediocracies" — things are decided and officials are elected by people of average intelligence, since they are a majority.[2] To put geniocracy into effect, Raël proposes that all people should have their intelligence measured using "sophisticated scientific tests". The right to vote would be granted to those whose intelligence is 10% above average, and only those who are 50% above average would be eligible to govern. Quote: "[T]his system ensures that the voices of geniuses, the gifted and the above average aren't cancelled out by the retarded, the backward and the below average. Therefore only 27.5 percent of the population will have a voice during elections."[3] For example, in 1977 France, out of 30 million people, 8.25 million would be allowed to vote, and about 150 000 would be eligible to be elected. 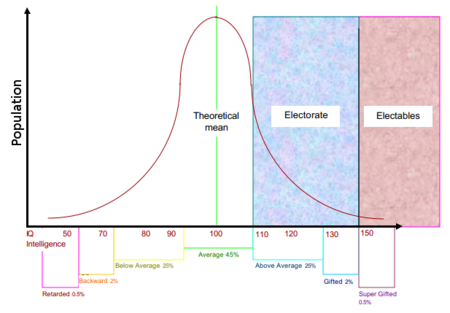 It is stressed that the tests should not favor the already educated, but should be unbiased and measure raw intelligence. "Then geniuses will be drawn from all social classes, all races and both sexes, and the process will therefore be truly democratic," Raël writes.[3] Age would not be taken into account either. Quote: "The fact that we presently give the vote to an idiot just because he is 18 years old, yet exclude a 16-year-old genius only because he or she is under voting age, is proof of how maladapted our present crude democracy is."[4] The goal is to measure "basic" or "practical intelligence" (as he misleadingly calls it) and "good old common sense".[4] For this reason it is proposed that IQ (Intellectual Quotient) would instead be called IP (Intellectual Potential). He does stress that passing as a genius doesn't give a person a right to govern, it only makes one eligible to be a candidate.

Foreseeing accusation of elitism, Raël points out that people who disapprove of anything elitist would be the same people that would want the best doctors or the best surgeons to take care of their sick child.[5]

Not an exactly ingenious plan[edit]

An article on geniocracy on raelianews.org says that the world has the problems it has today because "those governing us are either morally bankrupt, simply inept or both".[6] It is completely illogically assumed that having a higher number of intelligence points equals competence and good morals. The notion of measuring something as ill-defined and subjective as "intelligence" or "common sense" objectively and scientifically is flawed, and intelligence tests of all kinds are notoriously unreliable, arbitrary and culturally biased. Judging everyone according to these tests, it seems unlikely that any person of somewhat decent intelligence but great knowledge, education and understanding of a relevant field, would even be eligible to be elected. Also, Raël seems to understand that geniuses can be "blocked by personality problems" or psychological inhibitions, but figures they're all good to go as long as they pass the test.

The bit about elitism and doctors is a false analogy, since medicine follows scientific principles to diagnose and treat a patient, whereas politics involves a multitude of subjective factors, interests and perspectives, with questions that do not necessarily have right or wrong answers. When large sections of the population are not represented, the interests of a minority can easily dominate.

But reportedly this system of governance was recommended by highly advanced space aliens[7] (who use this system themselves! on "the planet of the Elohim" as the back cover says, though the book makes no mention of Raelian cosmology), so naturally we should all assume that its basics are flawless.