The Juche tower in Pyongyang

Juche (주체), or "Kimilsungism",[note 1][2][3] is the state religion in all but name of North Korea. Loosely translating as "self-reliance", it is a unique, Korean-flavoured variety of Stalinism with a heavy dose of national mysticism, ascribing supernatural feats and deity status to the "Great Leader", the "Dear Leader" and more recently, the "Supreme Leader" as the "organic" leaders of the Korean people.[4] It also borrows from Maoism in its third-worldist orientation and "mass-line"

ideology, the latter manifesting in the token toleration of two other political parties besides the ruling Workers' Party of Korea, and in the practice of encouraging as many people as possible to join the Workers' Party.

Kim Il Sung popularised the term juche in 1955, initially to send a signal against following the Soviet line too closely.[5] Juche "philosophy" later developed three key principles: independence, self-sustenance, and self-defense.[6] Juche is not an orthodox Marxist concept; if it has an analogue within the rest of Marxism it is found in the arguments over "socialism in one country".[7] In fact, Juche is fundamentally a Korean nationalist concept,[8] with closely related concepts of national self-reliance found in other Asian nations as well, especially in Japan and China. While drawing from pre-Marxist Asian political theory, from Korean nationalism, and from national mysticism, it also maintains its Stalinist and Maoist character (despite being a justification for rejecting Marxism, something that in Maoist philosophy is extremely hated). Taken as individual words, the three core tenets of Juche could be lifted straight from a book on the French or American Revolutions, but the "self" in this context is the nation. The Kims are leaders naturally emerging from the collective will of the people. This has led to allegations that Juche is not exactly Stalinist but actually monarchist, or even fascist,[9] which makes this all very bizarre. We can at least say for certain that it's Orwellianly authoritarian.

Some have argued that the supernatural elements in Juche mean that it is effectively a religion, although the official North Korean line portrays Juche as an atheistic philosophy instead.[10] Hwang Jang-yop,

the official responsible for inventing Juche, defected to South Korea in 1997 and spent the rest of his life as a harsh critic of the North Korean régime.[11]

There is a very large racist component to all North Korean propaganda and iconography.[12] In it, the pure Korean race is absolutely virtuous and wonderful in a way that no other race of people can be, with Japanese and Americans being the most evil (though ironically, Juche is derived from a Japanese word (主体 shutai)). Non-Koreans are constantly referred to in animalistic ways, and the death of a non-Korean is always written in a derogatory way. This penetrates to all levels of government publications (which are, of course, all legal publications in North Korea). Even math textbooks have questions like "Three People's Army soldiers rubbed out thirty American bastards. What was the ratio of the soldiers who fought?"[13]

The odd thing is, contrary to most fascist propaganda, the Korean race is not held up as a source of strength. Instead, the propaganda shows it as inherently weak and unable to fend for itself in such a violent, evil world, and so instead needs the strength of its pure military leader, Kim Jong-un.

During the Sino-Soviet split in the communist world, Juche meant North Korea would follow its own path, not siding entirely with either side but keeping its distance while remaining friendly to both. This led to both the USSR and China lavishing favorable trade terms and aid on North Korea, each trying to woo it into their own camp, and at the same time the amusing placement of signs in northern border towns by the North Korean government warning citizens to be on the lookout for Chinese and Soviet spies. This of course caused the opposite of self-reliance to occur; jarring as it may seem from today, North Korea was considered one of the economic "miracles" of the communist world.[14] Once the Berlin Wall fell and with it the Soviet Union and its foreign aid war with China over North Korea, the bottom fell out of North Korea's status and it stands today as a textbook example of a thoroughly oppressive government whose people are starving to death while the leaders feast.

Starting in 1994, an ideological innovation known as Songun ("military first") was added to the Juche ideology.[15] Under Songun, the Korean People's Army has been elevated to the top status in society, upheld as the primary focus and source of politics, supplanting the leadership role previously held by the Korean Workers' Party, and granted the vanguard status analogous to that of the industrial proletariat or peasantry in earlier versions of Marxist-Leninist ideology. Again there is a heavy "blood-and-soil" component to all this. North Korean media is now filled with exhortations that the army, leader, party, and people are all one, while the military is given the top, indeed nearly the only, priority in government while it drains away resources and people from the rest of society.

North Korea only has a population of 24 million people, but has over 1 million in the military, and another 8 million in reserve, making it the largest country by military personnel (and the largest military spender) per capita.[16][17] This reduced the workforce and increased those needing to be supported by that workforce to such an extent that 2-3 million people starved to death.[18] It has also had the completely counterproductive effect of making many of the youngsters in North Korea permanently unfit for military service, due to the mental and physical damage that comes with malnutrition. Over the last 50 years, it's estimated that North Koreans have shrunk in height on average by two inches or more due to this.[19]

A good analogy might be the classic science fiction trope of an out-of-control computer drawing ever more power to itself while the lights grow progressively dimmer everywhere else and eventually go out completely. As this always ends the same — with the computer finally burning itself out and erupting in a shower of sparks — so has it been suggested that Songun is a last desparate act of trying to salvage a collapsing regime, and will inevitably accelerate that collapse. At least one writer entertains this as one possibility, but also notes its similarity to the junta of South Korea under Park Chung-Hee during the 1960s.[20] It remains to be seen what will happen to a North Korean regime increasingly centered on a military draining away most of its resources, not propped up by any outside powers (excepting, arguably, China), and not actively using that military in any foreign adventures (excepting, arguably, its frequent saber-rattling against South Korea).

One thing that you might notice when looking through the annals of 20th century revolutionary communist theory is that there are a great many schools of thought named after former authoritarian leaders, for example, Stalinism, Castroism, and Maoism. It is, as one might imagine, a great honor to have an entire school of socialist theory in one's own name, so naturally this type of prestige was coveted by many a dictator, looking to show the world that he is not just a tin-pot statesman, but a philosopher-king! Well, not king, maybe philosopher-politburo-chairman.

Following the death of Kim Jong-Il, the North Korean government officially declared the philosophy of Juche as "Kimilsungism–Kimjongilism", with the implication being that the younger had contributed significantly enough to the doctrine that his full name should be smushed into the title as well. Whether or not this is actually the case is debatable, though one notable addition by Kim Jong-Il is the concept of "Socialism of Our Style", essentially the idea that North Korea is still around because the Soviet style of communism that was once popular in Europe and Asia is inferior and doomed to fail. Definitely not like North Korea. 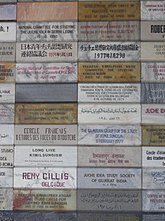 Plaques from international study groups at the Juche tower: tankies of the world unite!

Regardless of which label is applied to it, Juche is a batshit ideology,[note 2] the application of which has predictably resulted in misery, oppression, and (once the artificially favorable trade terms and foreign aid from China and the USSR were cut off) deindustrialization and famine in North Korea. And yet, due to Juche, the people in North Korea are still being forced to praise and love their beneficent overlords.

Like all crazy groups, it has its backers in the West, many of whom form what are known as Juche 'study groups' for examinations of various Juche-related texts, most of them written by the Kims.[22] However, there is no chance for any of the Western powers to ever adopt Juche as a guiding philosophy. This is not really the intent of these "study groups." Juche is seen by them as a potential ideology for adoption in the developing world as a mode of resistance against "Western imperialism", despite abandoning Marxism for imperialism. Even there, Juche has made little headway (in contrast again to Maoism, which was at one time popular among revolutionaries) and is considered on the whole to be a strictly North Korean aberration.