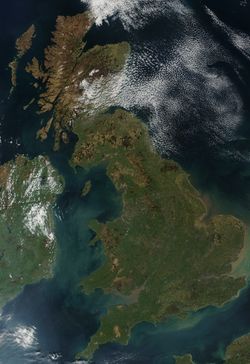 Oi!! What's all this then?!
This article is about the island in the British Isles. For the countries of Great Britain, see England, Scotland and Wales, or United Kingdom for the multinational state.

Great Britain is an island in the North Atlantic, just off the coast of Europe. The largest island in the archipelago called the British Isles, the word "Great" sadly refers to its size and not to any other quality. The French called it "Grande Bretagne" in order to distinguish it from "Bretagne" or Brittany - which is either uncharacteristically generous of the French or indicates a more characteristic lack of a sense of irony.

The usage of the word "Great Britain" has fallen out of favour in British political discourse: Instead people only use the term "Great Britain" when they discuss the United Kingdom without reference to Northern Ireland.

There is evidence of human life in Great Britain as early as 500,000 years BCE,[1] and evidence of modern human ancestors approximately 30,000 years ago.

The first documented peoples of Britain known about were around in the Iron Age, around 800 years BCE - folk referred to collectively as "Britons". Following the Roman occupation of Britain (which started in 43CE and ended at the beginning of the 5th century) the peoples of Great Britain suffered invasions in the north from Irish Gaelic tribes, eventually forming the Kingdom of Scotland in the 9th century, and in the south and east from assorted Angles, Jutes and Saxons, who are today referred to as Anglo-Saxons, credited with forming the Kingdom of England in the 10th century. Modern-day Wales developed its own identity following the withdrawal of the Romans from Britain - thus today the island of Britain has two modern "Celtic" nations: Wales and Scotland.

The countries of England, Wales and Scotland are located on the island. The southern two-thirds of the island is taken up by England, while the west midlands area belongs to Wales and the north of the island comprises Scotland. England's status as the largest country on the island has led some to the incorrect conclusion that "England" can be used to refer to the island as a whole. The name "Great Britain" is also sometimes used as a synonym for the political entity the United Kingdom, with or without the intention of omitting Northern Ireland from the Union. Although this is acceptable in casual usage, it is technically incorrect.

It is generally considered a fact that the only "great" thing Great Britain ever did was invent every popular sport in the civilized world, including soccer football, golf, rounders, croquet, rugby and cricket. The British girl's game of rounders was, of course, converted into a mildly popular American sport known as "baseball".

The British schoolboy's game of rugby - in which almost no protective clothing is worn - was also converted by the Americans into their own variation known as American football (or just "football" as they call it in America) which also has a mild following. Rugby league is probably the real sport that is closest to this variant, which mostly consists of men overdressed in protective padding running into each other for ten to twenty seconds at a time, and then taking a thirty second breather whilst deciding where to run into each other next.

There are a number of possible ways to refer to people who are citizens of the United Kingdom of Great Britain and Northern Ireland.

An archaic term that the Romans used to refer to the people of Britain during the occupation. Largely fallen out with the populace, understandably so.

Although newspapers sometimes use this word as in, "Three Britons Hurt in Exploding Moose Shock", the word "Briton" is rarely used in informal conversation. Indeed, when used in conversation most people would think of the "Ancient Britons" - the pre-Roman inhabitants of the present-day British islands.

This shortened form of the word is used and accepted by many - but not all - of the inhabitants of the islands. For various reasons some people do not seem to like the title. For example, as can be seen from the full name of the kingdom, it also includes the inhabitants of Northern Ireland. As a proportion of the citizens of this part, and indeed most parts, of the world are anti-British and the region has a special status, many (perhaps most) inhabitants would prefer to be called something else.

This term was coined by American sailors to refer to British sailors when they discovered that they used to drink lime juice in order to combat scurvy. It is generally not appreciated by citizens of the United Kingdom, especially in the common construction "Limey bastard". It shouldn't really be seen as an insult, as drinking the juice of a lime is almost certainly preferable to having all of your teeth fall out for want of vitamin C, and Americans are likely just jealous that the British worked this out before they did.

Often shortened to "Pom", and allegedly deriving from "Pome" (Prisoner of Mother England), this is a term used primarily in Australia, New Zealand, and South Africa to denote anyone of British nationality or origin. It is sometimes considered offensive, particularly in descriptive expressions like "Pommy bastard", "bloody Pommy bastard" and "whingeing Pommy bastard", for no obvious reason.

It may have something to do with pomegranates. Or not.

These are respectively the Welsh, Irish Gaelic and Scottish Gaelic names for an Englishman. They all derive from "Saxon".

Native Welsh speakers have been known to gleefully sing "Cachu ar bloody Sais" to the tune of "God save the Queen".

The Saxon invaders gave names to the parts of England where they settled: Essex, Middlesex, Nosex (where they failed to thrive), Sussex and Wessex.

This term has been proposed as a possible solution but it suffers from a number of shortcomings. It is almost unpronounceable, unknown internationally and neither used nor accepted by any significant population in the UK. It's also confusingly close to kipper

, a common term for someone who supports the United Kingdom Independence Party (UKIP).

Another obvious solution would be to call inhabitants according to their country/principality. It is, however, regrettable that most of the "local" names would run into some national or international problem.

There is increasing fragmentation of the UK. Wales has its own Assembly, while Scotland and Northern Ireland have Parliaments. The resulting nationalism has led to the rejection of the word Brit by much of the population. This "devolution" of Wales and Scotland did spark a trend of fairly serious suggestions for other parts of England to devolve power away from the London based parliament of the UK. This would lead to places like Cornwall and Northumberland essentially having their own parliament.. whatever next.

If you're looking for a fight[edit]

Ask an Irishman, "If England, Scotland and Wales are on Great Britain, does that mean Ireland is on Not-So-Great Britain?"