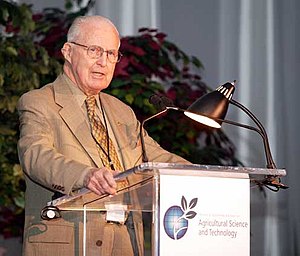 Doctor Norman Borlaug (1914–2009) was an agronomist, credited as the father of the Green Revolution. His work to improve crop yields in Latin America, later expanded to Asia and Africa, is said to have saved over a billion people from starvation, contributing to his receiving a 1970 Nobel Peace Prize.[1]

Borlaug's techniques have been criticized for their claimed impact on human health and the environment, and by people who fear that large scale agriculture creates dependency on corporations. He himself was mostly dissmisive of his critics, viewing some as "salt of the Earth" with legitimate concerns but many others as simply out of touch elitists or sensationalists.[2][3] 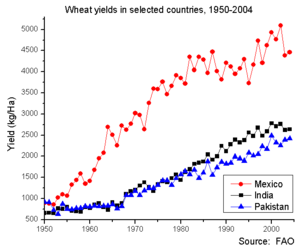 Wheat yields per hectare in Mexico, India and Pakistan, from 1950 to 2000. Mexico is the red line.

The Cooperative Wheat Research Production Program, of which Borlaug was a member, was a project to boost Mexican wheat yields. Founded in 1944, the project sponsored by the Mexican Ministry of Agriculture and the Rockefeller Foundation was a painstaking effort to cross breed strains of wheat, and experiment with growing conditions, to reach the goal of making Mexico self-sufficient in wheat production. One particularly innovative approach, which was initially resisted due to costs involved, was to take advantage of Mexico's two growing seasons. Here they use the summer to breed wheat in the central highlands, which is later transplanted to northern Mexico to take advantage of temperature and altitudinal differences, allowing wheat to be cultivated "back-to-back", thus giving two harvests per year. This transplantation is known as shuttle breeding.

This idea was initially rejected, due to the cost and the commonly accepted knowledge of the time that seeds must "rest" between harvest and planting in order to store up sufficient energy for germination. The rejection of this plan almost led to Borlaug's resignation from the project, which was averted by the acceptance of his scheme. Borlaug himself did not anticipate all of the results from the plan, which by all accounts was a breakthrough in agriculture.[4]

Photoperiodism, a mechanism through which plants adjust their life cycles based on lightness and darkness, was a problem for the project. Varying levels of light determine seasons, meaning that the wrong levels of light could inhibit growth. The shuttle breeding approach, combined with the selective breeding, resolved this issue, leading to results that ran contrary to accepted knowledge of the time.

In the north we were planting when the days were getting shorter, at low elevation and high temperature. Then we'd take the seed from the best plants south and plant it at high elevation, when days were getting longer and there was lots of rain. Soon we had varieties that fit the whole range of conditions. That wasn't supposed to happen by the books. —Norman Borlaug[5]

Wheat, like pretty much every living organism, is susceptible to disease, steam rust (a fungal infection) being a serious issue for wheat cultivators. Any given strain of wheat carries genes conferring some resistance to disease, but, like all monocultures, is susceptible to destruction on encountering infections for which they have little or no resistance. Borlaug took phenotypically compatible strains that could interbreed, and using a process of breeding known as backcrossing, bred resistance by breeding genes from various strains back in to a single parent strain to increase its resistance to a wider range of pathogens, albeit with an increased risk of recessive genes. Also, this approach doesn't entirely mitigate the possibility of a new pathogen arising for which the strain lacks protection. Overall though, the parent strain would exhibit far more resistance than the strains from which it originates, and like shuttle breeding, helped increase yields.

Wheat strains vary in terms of stem thickness, length of stems, and seed heads. Longer stems offer a plant better opportunities to obtain sunlight, but support smaller quantities of seeds, as the increased thickness of stems is required to support heavier heads. Borlaug selectively bred "dwarfing" in to the wheat to give shorter but thicker stems, capable of supporting larger quantities of seeds, by inducing rapid growth spurts through the introduction of nitrogen based fertilisers. By cross-breeding a Japanese variety of wheat, Norin 10, with his disease resistant strains, he was able to combine introduce the shorter and thicker stalks to his disease resistant lines suitable for growing in tropical and sub-tropical climates.[6]

Application of Borlaug's work in Asia and Africa[edit]

In 1965, Borlaug began tackling famine in India and Pakistan, who were at the time at war and requiring large quantities of food aid to feed their populations. Bringing the Lerma Rojo 64 and Sonora 64 strains he'd developed, initial yields were the largest ever harvested in South East Asia. India and Pakistan subsequently imported large quantities of these strains, and by the 70s, crop yields had almost doubled in Pakistan and India, with India in 1974 becoming self-sufficient in grain production.[7] His efforts in India and Pakistan have not been without some criticism, as reliance on these crops could cause issues should the right pathogen or set of circumstances attack the crops.

Borlaug's use of fertilisers and pesticides, and his cross-breeding of plants, has been criticised for the perceived risks that arise from such an approach. Borlaug himself was critical of the organic farming movement for being inefficient, impractical in terms of feeding an increasing world population, and for being based on concerns unsubstantiated by sound evidence.[8] By encouraging a movement away from subsistence farming to larger scale centralised agriculture, it is claimed that the environmental impact from the building of infrastructure to support the farming has an averse environmental impact. Also, fears of the reliance on monocultures have been raised, similar to current criticism of genetically altered strains offered by corporations such as Monsanto. While such concerns do merit consideration, increasing demand for food is difficult to meet without applying Borlaug's approach. Critics can point to incidences, such as the Irish potato famine, as examples of the risks of over-reliance on a single crop - while disregarding the fact that the Irish Potato Famine happened prior to the Green Revolution and modern agriculture means that agriculture has always been vulnerable to these risks, and that the Irish Potato Famine occurred while Ireland was a net exporter of food. In theory, Borlaug's approach of breeding resistance from multiple strains mitigates some of this risk, but obviously does not completely remove it. Overall though, the yields are far higher than would be possible than using traditional methods. An "organic" approach cannot be as efficient as Borlaug's approach. There are several counter-points to criticism of Borlaug's methods. 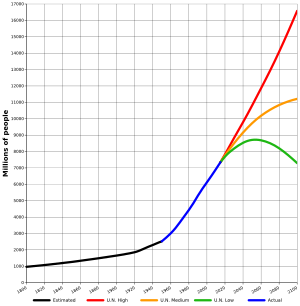 Organic farming requires more land for cultivation, meaning an overall drop in genetic diversity as natural areas are cleared for agriculture. This of course assumes that land is actually suitable for rearing crops, which is by no means a certainty. According to a 2005 study by the University of Wisconsin-Madison, almost half of the planet's land surface is consumed by agriculture.[9] According to the classic Malthusian scenario, as food production increases, people who would otherwise have died would live, and more children would be born. Every person alive creates additional strain on the planet, with a sharp increase correlating with improved methods of food production.[note 1] In terms of people already alive, the cat is out of the bag, and to revert to traditional methods would result in wide-spread starvation. With the exception perhaps of hard green misanthropists, few would even consider such an option as a way to save the planet.

Green Revolution proponents have argued that intensive farming can reduce this land usage through increased efficiencies. However, in practice, rather than growing foodstuffs, the focus in many of the countries that were part of the Green Revolution has been on the growing of lucrative cash crops for export. Exacerbating this problem, land formerly covered in native forests and jungles has been cleared for this purpose as seen in Brazil where the planting of especially soy bean crops has led to substantial deforestation.[note 2]

Increased use of pesticides and fertilisers[edit] 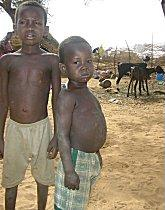 Brother, can you spare some organic certified brie?

Fertilisers and pesticides are used almost universally to some degree. Standards for organic produce allow for processes that unwitting consumers would never associate with "natural" farming methods, including the use of pesticides.[10] Genetic modification of crops have the benefit of breeding hardier strains, meaning less of a need to apply fertilisers and pesticides. As mentioned earlier, fertilisers and pesticides are already widely used. Fertilisers in particular range from cattle dung through to industrially produced compounds. Although banned in the western worlds, some farmers elsewhere may rely on pretty much anything at hand — including human waste[11] and other things we really don't want in the food chain, which bring with them considerable health risk. Most fertilisers are themselves improved or concentrated forms of naturally occurring substances (such as nitrogen). This brings benefits and side-effects. By being more precise, farmers can use just the compounds necessary for encouraging plant growth (the benefits of faeces without the ickiness and pathogens), but increased concentrations can aversely affect nature. Humans are creating large concentrations of substances not normally found in nature, the results of which may cause harm. Pesticides and fertilisers can run in to rivers, affecting wildlife, and humans who draw water from these sources. This is not an issue specific to agriculture. In 2001 it was claimed that the female hormone Oestrogen, excreted in human urine, was found in the River Thames.[12] Also in 2012, it was claimed that caffeine, originating from sewage treatment, is leading to oceanic pollution.[13]

With the industrialisation of agriculture, consumers and producers alike become increasingly dependent on corporations for seeds and compounds needed for their cultivation in to crops. Within a region, subsistence farmers and other small producers may be unable to compete with modern industrial farms, except in niche markets — such as organically grown crops. Even in the case of organic crops, the profitability has led larger producers to take an interest, meaning that the organic celery you enjoy, for health reasons and for taking a swipe at The Man, may not be coming from the natural and idyllic small farm that the organic industry promotes as its image. Farmers adopt the best, most profitable crops — if one variety is clearly superior to another, as is the case with many varieties of genetically modified crops, virtually all farmers will adopt that strain. Those who avoid such seeds may find their crops contaminated by pollen and stray seeds coming neighbouring fields in which modified seeds have been planted, though unless the farmer takes advantage of the patented qualities of the cross-contaminated strains, this is only an issue for organic certification. The cross-contamination risk is also cited as an environmental issue.

Some kooks also complain about seed patents, not understanding that the farmers choose to purchase the superior patented seeds every year over replanting their own crops - the farmers do this because it is considerably more profitable to buy the higher-yield seeds. While opponents of GM crops will sometimes cite lawsuits against farmers whose crops were "cross-contaminated", in reality, every single lawsuit brought by Monsanto against farmers has demonstrated that the farmers deliberately planted and took advantage of the GMed seeds, such as by spraying Round-Up on their crops - indeed, in many cases, the farmers were turned in by their neighbors or suppliers, who noticed their unusual behavior.

Mass production is almost always more efficient than smaller production lines, and this is as true in agriculture as it is in industry. It's a reality that the population of the United Kingdom will go hungry if relying exclusively on Prince Charles and his organic farms, yet there remains a market for independently produced food, albeit sold at a premium.

However, the development of genetically modified food by corporations does not have the goal of fighting hunger. As a matter of fact, there would be enough food for the whole world population, but hunger is still common in some countries due to bad distribution and waste.[14] Therefore, an increasing production of food is not the solution to this problem.