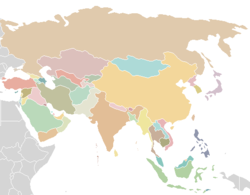 Asia is the world's largest continent. It is also the continent which contains the most geographically diverse natural resources, with various different landscapes ranging from Mediterranean (in Cyprus and Turkey) to arctic tundra (in far eastern Russia), deciduous forests (north China, north Russia and others) to sub-tropical and tropical jungles (South and parts of East and Southeast Asia), and is also set to be one of the world's richest, with predictions of Asia producing 50% of the world's wealth by 2030.

While most continents are defined by obvious natural borders, geographically Europe and Asia lie on the same continent; Asia was an invention of the ancient Greeks, the boundary defined on a cultural rather than geophysical basis.[1] Today the dividing line is through the Aegean, Bosphorus, Black Sea, watershed of the Caucasus mountains, River Ural, and Ural Mountains.[1] The Middle East (sometimes referred to as Western Asia) is also considered to be part of Asia, and indeed, the word ultimately comes from the Greek name for Hittite Anatolia. However, in his book Orientalism, Edward Said argues that the very idea of "Asia" is essentially an imperialist construct.

Being the largest continent on the planet, it is unsurprising that Asia has as much human capital as it possesses immense natural resources. Since the sixteenth century has been the object of colonisation and commerce by foreign powers, beginning with the Russians who began expansion eastward of the Urals under Ivan the Terrible (1530-84), followed by the Portuguese, Spanish, Dutch, British and French maritime powers who traded and conquered in order to make the spice (not melange) flow, though China and Japan strongly resisted foreign influence until the 19th century. The waning power of Spain saw her only significant Asian colony (the Philippines, which the Spanish, due to their colonial focus on the Americas, saw as the western most part of their empire) pass into the US hands at the end of the 19th century.

The 20th century dawned with the collapse of Imperial China and a resurgent, industrialised Japan, which joined in the colonial scramble for influence in China and her former areas of influence. This process was accelerated drastically by the Second World War, which saw Japan annex more or less the entirety of South East Asia, from Korea and Manchuria to the then Dutch East Indies (modern Indonesia). This was brought to an end with the defeat of Japan in the war.

From 1945 to 1992, the United States and Soviet Union would be the greatest influences in Asia, fighting numerous proxy wars in Korea, Vietnam (spreading to Laos and Cambodia) and Afghanistan, as well as supplying weapons to their preferred sides in the domestically initiated by heavily supported conflicts between Iran and Iraq, and between Israel and just about everyone nearby. The collapse of the Soviet Union changed things overnight, leaving a vacuum of influence in her former client states filled quickly by the US, and, from the late 1990's onward, by China, the new purveyor of arms and purchaser of raw materials. The state of India conquered Portuguese India (principally Goa) in 1961, Britain's last middle-eastern holdings became independent in the early 1970s, and Hong Kong and Macao were handed over to China in 1997 and 1999 respectively, effectively ending western colonialism in Asia.

Economically, this period also saw the rapid rebuilding of Japan as an economic but essentially demilitarised power, along with rapid industrialisation of Hong Kong SAR, South Korea, Singapore and Taiwan (ROC), known as the Four Asian Tigers

, and to a lesser degree, Malaysia, Indonesia, Thailand and Vietnam. However, the Asian financial crisis

in 1997 also affected some of these nations.