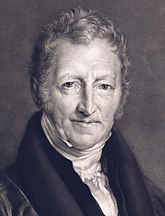 Thomas Malthus, outstripping the increases in your food supply.
Not to be confused with the religious stance known as maltheism.

Thomas Robert Malthus (1766-1834) was a British thinker known for his works in economics, demography, and population.

An Essay on the Principle of Population[edit]

Malthus' best known work is the 1798 book-length work. Essay on the Principle of Population, which has had a far-reaching influence on not only the overpopulation debate, but much social thought of the 19th-21st centuries. The book was actually a specific response to the utopian writings of William Godwin (1756–1836) and the Marquis de Condorcet (1743–1794). It contains what is now called the "Malthusian growth model," in which food supply can grow only at linear rate[notes 1], while population is in principle capable of growing exponentially; therefore, checks must be acting on the population which prevent it achieving its potential growth rate.[notes 2] Malthus described positive checks on population growth, such as war, disease, and starvation; as well as preventive checks, such as delayed marriage, abortion, and birth control.

In the book, Malthus also formulated what would later be called "Malthus' Iron Law of Population," which states that growing population would lead to a greater supply of labor and thus lower wages. On this basis, Malthus argued for the repeal of poor laws and welfare because they would keep the price of food high and encourage further overpopulation and poverty. Instead, he urged "moral restraint": by voluntarily delaying marriage and remaining chaste before marriage, population could be kept within bounds, leading to ample food supplies and higher wages. He also attempted to address the problem of evil, writing that evil was necessary in the world for virtue to exist.

Both Darwin and Wallace credit the ideas of Malthus as one of the important influences leading to the theory of natural selection. He was also fiercely criticized by prominent communists.[1][2]

Malthusianism also has the minor flaw that ignores that the food supply is simply another population of organisms. The plants and animals composing the food supply can themselves multiply exponentially! At least until they, too, run out of space and resources. But humans are not unique in this regard.

Malthus lived in a time before birth control was widespread, and when economics was still known as the "Dismal Science". Or really, it was just ending that phase and Malthus was arguing that it wouldn't last. Long story short, up until around the time Malthus was born, every economic innovation was almost immediately met by a growing population, and the vast majority of people were back to abject poverty. New farming technique adds to the food supply by 10%? People eat better for a few years, but then more survive to adulthood, and you are back to where you started. Malthus looked at history and made the reasonable assumption that the economic growth of the late 18th century would have the same result. But what happened was the world reached a "critical mass" of sorts. More people meant more scientists and engineers. Where a single inventor could create a device to increase food production by 10%, ten inventors could double it. The economy was able to grow faster than the world population could keep up with it, which is why abject poverty stopped being the norm in the (developed) world by the end of the 19th century.