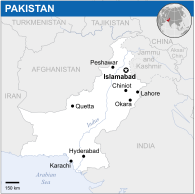 (basically a declaration that Hindus and Muslims should not live together in the same country) the then-powerful Muslim League, led by Jinnah, demanded a separate state solely for Muslims. Even as leaders like Gandhi and Allama Mashriqi

worked against this to create a secular nation, a steady flow of Muslims began leaving the largely secular Congress party to support the movement. The whole thing came to a head in 1947, following Britain's hasty withdrawal from India without involving itself in uniting the splintered structure of the British Raj (at the time present-day India was divided into an unbelievable 565 different Princely States,

each with its own ruler), forcing a partition into an Islamic Pakistan and a (mostly) Hindu India. Though Gandhi's efforts to stop this failed, he was accused by Hindus for "yielding too much" to the Muslims and eventually assassinated a year after partition by a Hindu extremist, Nathuram Godse.

The partition also sparked genocidal riots, which killed between 200,000‒500,000 people.[1] Consequently, tensions between India and Pakistan have remained high throughout the post-colonial era; the two have fought several wars, starting with the Pakistani invasion of Kashmir in 1948 kicking off the First Kashmir War, and most recently in 1999 when Pakistani soldiers encroached into Indian territory (less than three months after the two countries had signed a peace agreement) and began occupying strategically key points in the region of Kargil. India and Pakistan each have nuclear capability, solely to deter the other from attacking. This tactic has raised the stakes but failed to reduce their hostility and mutual loathing.

Pakistan originally comprised two territories – East Pakistan and West Pakistan, on opposite sides of India. In 1971, when Pakistan's first ever democratic election was won by an East-Pakistan party, the then government of Zulfiqar Bhutto ignored the result, causing East Pakistan under Sheikh Mujib Ar-Rahman to declare secession, creating Bangladesh. The Western Bhutto government responded completely rationally to this by sending in the army to rape, kill, and massacre

hundreds of thousands, mostly religious minorities, in their eastern counterpart. Bangladesh responded by persecuting Biharis, an ethnic group of non-Bengalis within Bangladesh supporting Pakistan. [2] Bangladesh sought out India's help, and with it, managed to mount a successful retaliation, achieving independence.

The word "Pakistan" is derived from the initials of the three regions the state borders – Punjab, Afghan Province, Kashmir, Sindh, and Baluchistan.[3] Pāk means "pure" in Urdu; thus, Pakistan is "the land of the pure."

As if the threat of all-out nuclear war with India weren't enough, Pakistan also had the Taliban and Al-Qaeda to worry about, partly as a result of dictator Muhammad Zia-ul-Haq's Islamicisation policies.[4] Luckily, however, terrorism has slowly but steadily declined in the country after the former Chief of Army Staff, Raheel Sharif, launched a military operation known as Zarb-e-Azb to recapture all areas from terror groups.[5] The entire northwestern state of Pakistan – formerly (and aptly) named the North-West Frontier Province, subsequently Khyber Pakhtunkhwa – was the main stronghold of the terrorists, as they could strike anywhere: US Embassies and consulates were attacked three times between 2002 and 2010; Shia mosques and holy sites also frequently became targets. The US and Britain's MI6 encouraged Pakistan to promote the war against Soviet-backed Afghanistan in the 1980s, using the Islamic militants as proxies. These gangs included Osama bin Laden's Al-Qaeda and were organized under the Benazir Bhutto government. The CIA later found itself in the position of having to buy back the "Stinger" ground-to-air missiles it had supplied to its erstwhile allies for fear that they would be used against civil airliners. The Islamic fundamentalists have challenged the principle that Pakistan can be both secular and Islamic. They had little popular support outside the tribal areas of Khyber Pakhtunkhwa, where their influence is mediated through tribal warlords, but were able to achieve a disproportionate effect by their ruthless campaign of bombing and murder.[citation needed]

Technically Pakistan is an ally of the United States in the current war in Afghanistan (2001- ). We use the qualifier "technically" because while the Pakistanis do make several battalions of soldiers available to the cause, the loyalty of the commanders and especially of their intelligence service, the ISI, to Washington is suspect. Some analysts think this is because of their sheer paranoia about India, while others believe that Islamists have reached high-ranking positions in the military establishment. The Pakistani leadership was apparently "shocked" that Osama bin Laden was living in Abbottabad, the city which houses Pakistan's equivalent of New York state's West Point. US drone attacks frequently target Pakistan's border regions, which leads to widespread anti-Americanism and frequent protests, flag-burning and violence. Ironically there would be no need for drone strikes if the Pakistani military held up their end of the bargain and went after the militants themselves, but they seem to be content to take kickbacks in the form of American military aid and play a double game.

Pakistan is officially (and as of 2016, in practice) a democratic parliamentary federal Republic. They were formerly ruled by their benevolent fearless dictator, and former general, named Pervez Musharraf, whose first name offers a cornucopia of potentially humorous misspellings. After 5 years of disastrous performance of the Pakistan Peoples Party (PPP), they are currently ruled by Shahid Khaqan Abbasi. On 6 August 2017, the Pakistani Supreme Court removed Nawaz Sharif as prime minister after a lengthy investigation into Panama Leaks. The state institutions have decided to root out corruption and nepotism in the country.

The markhor is Pakistan's national animal. We approve.

If a Pakistani accepts a person into his house as a guest, he will defend his guest – to the death, if necessary.[citation needed] Even if the guest later turns out to be a fugitive from justice, or Osama bin Laden. This factored into why it took so long for the US to locate bin Laden; the house that was harboring him wouldn't expose his presence, because he was their guest, no matter what incentives the US (or the Pakistani government) gave.

The seventh-largest collection of engineers and scientists is from Pakistan. [6]

Pakistan's literacy rate grew by 250% since 2008, the largest educational growth in any country in history. [7]

Pakistan is one of three (the other being Afghanistan and Nigeria) countries to still have polio thanks to anti-vaccination beliefs within former remote Taliban-controlled areas. However, Pakistan is closest to becoming polio-free due to its diligent and innovative campaign programs to vaccinate.[9][10][11]

According to a poll from 125 countries by the Institute of European Business Administration, the fourth-most intelligent people in the world are Pakistani. [15]

The isolated, mysterious Hunza people of the Pakistan Himalayas have become the subject of one of the great woo campaigns of the western world, centering mainly around the ludicrous claim that they regularly live to be 150 years old or more. This completely amazing hahit of longevity has led scores of anthropologists, alternative medicine gurus, and reporters to write books with names like "The Healthy Hunzas", or to sell bottled water under the label "Hunza" (implying that drinking the water will allow you to live as long as they do). All this in spite of the fact that the only legitimate medical study of these people found that (shocker) their health and life spans were exactly what one might expect of a poor, premodern agricultural society.[16]. But of course, as they say in the old west, "when the legend becomes fact, you print the legend."

Pakistan moved between instability and military rule until 1958, when a military junta took power until 1972. The leftist Pakistan Peoples Party then took power (following democracy being halted for two years during the civil war). The 1977 election saw the PPP win again, leading to the Pakistan National Alliance, a coalition of nine conservative parties, accusing the government of election fraud. So they overthrew the government and established an Islamist far-right miliitary dictatorship under Muhammad Zia-ul-Haq. While the Pakistani economy saw substantial growth, the regime was authoritarian and Islamist, with Zia's goal being to implement full Sharia law. In 1985, democracy was de jure restored, but Zia was still pretty much dictator. Zia died in in a plane crash in August 1988.[17] The United States supported Zia, out of fear that the PPP would end up allying Pakistan with the Soviets (they feared an supposed socialist transition). Following this, another election was held that brought the PPP back to power. The conservative Pakistan Muslim League rose to power in the 1997 election, but was overthrown in the 1999 coup. When democracy was restored, a liberal/libertarian splinter faction of the PML won the 2002 election. A corrosive coalition between the PPP and original PML was formed in 2008, but fell apart very fast. The original PML won the 2013 election.[18] The Tehreek-e-Taliban ruled much of northwest Pakistan, especially around its border with Afghanistan. This organization is different from Afghanistan's Taliban. Thousands of Uzbek, Uyghur and Al-Qaeda fighters fleeing Afghanistan helped them. [19] This was prior to an operation called Zarb-e-Azb, launched by the military in 2014 which secured that border. However low-level clashes still occur.[20]

During Zia-ul-Haq's Islamisation barbaric laws were introduced in Pakistan. For example, the Ahmadi sect of Muslims, who regard their founder Ghulam Ahmed as the reincarnation Jesus, are forbidden from doing anything Islamic. They cannot call their mosques mosques. They cannot openly read the Quran etc.[21][22]
A prominent victim of this law was the physicist Abdus Salam Mohammad Abdus-Salam

, Pakistan's (and indeed the whole Muslim world's) first-ever Nobel laureate, who emigrated to London in protest. Abdus Salam still chose to be buried in Pakistan, but even death did not protect him from fanatics, who vandalized his gravestone (with the authorities' tacit approval) by striking the word "Muslim" from the phrase "First Muslim Nobel laureate."[23]

Pakistan punishes blasphemy towards all major religions. However, blasphemy towards the Quran or Islam, only, can lead to life imprisonment and death sentence. If a person, who is not regarded as Muslim because of Second Amendment, will be regarded as blasphemous should he try to maintain his Muslim identity. [24]