Tiktaalik is an extinct genus of fish which lived around 375 million years ago[1].

Unlike modern fish, Tiktaalik had a neck; it both had gills and lungs; it had bones in its fins that resemble the bones in the upper arm, forearm and wrist of land vertebrates; it had ribs that could support its body weight on dry land. [2][3] Given its "neither-fish-nor-fowl" attributes, many scientists see Tiktaalik as a transitional form in the evolution of tetrapods (four-limbed vertebrates, i.e. amphibians, reptiles, birds, and mammals). Scientists call it "the most compelling examples yet of an animal that was at the cusp of the fish-tetrapod transition".[4] 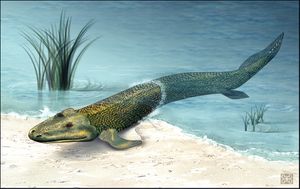 Artist's depiction of Tiktaalik pulling itself out of a body of water.

Creationists claim that 397-million-year-old (compare to Tiktaalik's age of 375 million years) fossilized footprints found in Poland show that Tiktaalik could not reveal a transition between water and land animals.[6] However, this argument is based on misunderstanding evolution as a linear progression. Augustine of Hippo's Great Chain of Being is fictional. There is no real reason why a primitive (i.e., resembling the ancestral) morphology could not survive to recent times (hey, coelacanth, how's it going?)

Plausible explanations for the 397-ma fossils include:

The transition from water to land is bridged by several transitional fossils, ranging from amphibian-like fish to fish-like amphibians. One research article[7] gives this list (with the caution that, like most things in evolution, there is no simple straight line):

CreationWiki has a page about Tiktaalik