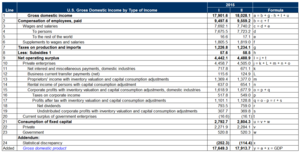 Gross Domestic Income (GDI) is a type of national income accounting that aggregates the different sources of incomes people earn in a single nation or region. Though less well known than Gross Domestic Product (GDP) GDI should, in theory, be roughly equal with it. One of the key concepts in basic macroeconomics is that spending should be equal to income.[1]

GDI measures economic activity based on an income approach, as opposed to the more common expenditure approach of GDP. In theory, GDI should equal GDP, but the different source data can yield different results. So, the US Bureau of Economic Analysis considers GDP more reliable because it's based on timelier, more expansive data. The basic formula is usually as follows:[note 1]

Where W refers to wages and salaries, P will be equal to profits, i equals interest, r refers to rents, T-s refers to taxes minus subsidies, D is capital depreciation, and a refers to minor statistical adjustments.[2]

GDI can be used to assess what share of national income is going to employees in the form of wages, compared to business profits. This can help gauge how workers are doing in terms of pay.

The Income- and Expenditure-Side Estimates of U.S. Output Growth