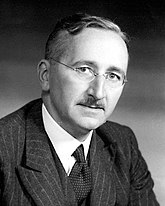 This isn't the Hayek you're looking for.

Friedrich August von Hayek[note 1] (usually shortened to Friedrich von Hayek or F.A. Hayek, 1899—1992) was an Austrian school economist, with all of the negative connotations that such a description implies. He co-won the Nobel Prize in Economics in 1974 with Gunnar Myrdal, who was a Keynesian economist.[note 2]

The most enduring and popular of his works today is not any of his strictly economic works but The Road to Serfdom,[note 3] a book explaining how "temporary" war-time measures often remain after the conclusion of the war leading to disastrous effects on economic well-being.[note 4] It shot to number one on Amazon when Glenn Beck mentioned it on his show.[3] This ought to have set off some irony meters as Hayek penned a lengthy essay entitled "Why I Am Not a Conservative," essentially arguing that conservatism was only good so long as it was conserving classical liberalism and not just any old set of policies or values.[4]

It is perhaps more relevant now in explaining the thought processes of wingnuts than the possibility of a commie takeover in today's post-Cold War world.[5]

Hayek's work expanded on Ludwig von Mises' work on the economic calculation problem, i.e., the alleged inherent impossibility of pricing goods in a state-run economy (which itself was an expansion of Max Weber's statement of the problem).[6] His idea of prices as information necessary to solve the calculation problem was very influential, albeit limited in reality to cases where there is no collusion, etc.

He also expanded on the Austrian Business Cycle Theory (ABCT). ABCT was rather "forward-thinking" at the time for attempting to tie the business cycle to credit expansion, although Irving Fisher

, a contemporary of Hayek, came up with his debt-deflation theory which did the same during the Great Depression as well.[7]

He debated John Maynard Keynes in a series of letters,[8] and Hayek is generally thought to have lost the debate in that most countries left the gold standard and undertook policies of Keynesian stimulus during the Great Depression. However, the Hayek vs. Keynes debate obviously still rages on, and the basic philosophy of each is mirrored in all the left vs. right debates to this day.[9] It has also been turned into two music videos for econ geeks to nerdgasm over.[10][11]

Piero Sraffa battled Hayek's formulation of ABCT on the grounds that it relied on a "natural rate" of interest when there is no single natural rate.[12] Hayek is generally thought to have lost that debate as well.

Hayek is often viewed as apart from the other Austrians for a couple of reasons. One is that, while he irrationally decried the "scientism" of mathematical econometric models popular in the field at the time,[13] he did not fully accept the a priori praxeology of von Mises.[14] Thus, there is sometimes a distinction made between the "Hayek tradition" and the "Mises tradition."

Second is that, like Adam Smith, Hayek is often invoked to defend absolute free market fundamentalism when he was in fact probably the most moderate of the Austrians. Let's read from The Road to Serfdom:

Nor is there any reason why the state should not assist the individuals in providing for those common hazards of life against which, because of their uncertainty, few individuals can make adequate provision. Where, as in the case of sickness and accident, neither the desire to avoid such calamities nor the efforts to overcome their consequences are as a rule weakened by the provision of assistance - where, in short, we deal with genuinely insurable risks - the case for the state's helping to organize a comprehensive system of social insurance is very strong... Wherever communal action can mitigate disasters against which the individual can neither attempt to guard himself nor make the provision for the consequences, such communal action should undoubtedly be taken.[15]

Although Hayek did not categorically oppose welfare measures, he would still be a right-libertarian by today's standards (though those bits about health care and anti-pollution laws didn't go down too well with the anarcho-capitalists[16]) and is often invoked (sometimes wrongly) by libertarians.

Hayek, demonstrating his libertarian credentials, praised the Pinochet regime in Chile. He visited multiple times and held a meeting of the Mont Pelerin Society there in the 1970s.[17] Backing the regime as a temporary, necessary evil, he said:

Well, I would say that, as long-term institutions, I am totally against dictatorships. But a dictatorship may be a necessary system for a transitional period. At times it is necessary for a country to have, for a time, some form or other of dictatorial power. As you will understand, it is possible for a dictator to govern in a liberal way. And it is also possible for a democracy to govern with a total lack of liberalism. Personally I prefer a liberal dictator to democratic government lacking liberalism. My personal impression — and this is valid for South America — is that in Chile, for example, we will witness a transition from a dictatorial government to a liberal government. And during this transition it may be necessary to maintain certain dictatorial powers, not as something permanent, but as a temporary arrangement.[18]

Chile did, in fact, make the transition from the Pinochet regime to a liberal democracy in 1988.

Hayek, a nontheist, had this to say on religion:

...[I]f somebody really wanted religion, he had better stick to what seemed to be the 'true article,' that is, Roman Catholicism. Protestantism always appeared to me a step in the process of emancipation from a superstition -- a step which, once taken, must lead to complete unbelief."[19]

One wonders if he is aware that Catholicism itself is a deviation from older Christianity, which is also a few steps away from other older religions.

Late in life he was associated with Stanford professor W.W. Bartley III, who was best known as a student and admirer of Karl Popper and at the time of his death was still working on editing Hayek's collected works. Hayek was also a follower of Erhard Seminars Training and author of the only authorized biography of Werner Erhard. Hayek's last published book, The Fatal Conceit (1988) was heavily edited by Bartley and there is some controversy over how much of the content is actually Hayek's writing as opposed to Bartley's.[20]

Academic research has also shown F.A. Hayek to be the better Hayek of the two.[21]