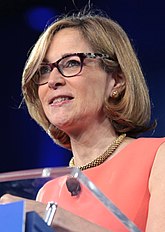 Amity Horror Shlaes (1960–) is an American journalist who writes for far, far too many respected publications, including the Washington Post, Wall Street Journal, Forbes, and The New Republic. Shlaes is hailed as an "expert" in history and economics, although she holds only a BA in English.

She is also a minor darling of conservative media, and a professional Panglossian.[note 1] She wrote one of her early books, The Greedy Hand, about excessive taxation during a time when taxes were, by historical standards, fairly low (i.e., the end of the Clinton administration). It also appears she was fired by the Financial Times for praising George Bush's response to Hurricane Katrina.[2] However, she rocketed to lesser stardom with her 2007 book, The Forgotten Man, a revisionist history of the Great Depression that made her the queen of New Deal denialism. This happened to be especially timely, considering the banking crisis in 2008.

Shlaes is responsible for elevating the myth that "FDR made the Depression worse" from fringe, libertarian circles to Republican dogma in the past few years. Incidentally, back in the 50s, Dwight Eisenhower actually referred to those who opposed the New Deal as "stupid." Ike does a good job of summarizing Shlaes' "scholarship," but let's delve in further for the hell of it.

First off, we get some hooey about the Roaring Twenties being great for poor people (in reality, income inequality drastically increased[3]) and how the 1929 crash was not really caused by speculation. Yes, the stupidity starts this early.

Then there's the totally inaccurate picture of Herbert Hoover as some kind of unprecedented and newly anointed progressive. Hoover was more pro-active than his predecessors (especially do-nothings like Calvin Coolidge[4]) and was known for his work in foreign aid after World War I as well, but his administration was not a drastic break from typical GOP administrations before him. He was still an ardent fiscal conservative and believer in "private charity" and "rugged individualism." This is a fairly naked attempt by Shlaes to pin the beginnings of the Depression on dreaded "liberal" policies. (Glenn Beck has really seized on this talking point to paint Hoover as some kind of socialist equivalent to FDR.[note 2])

Shlaes goes completely off the rails once FDR comes into the picture. She uses outdated unemployment statistics that don't count jobs created by public works projects because they're "make work" and as such not "real jobs." (Gummint can't create jobs! Only the John Galts of the world can do that!) In addition to that, she measures the economy using the Dow Jones Industrial Average.[note 3] This puts the lie to the fact that Shlaes is simply being stupidly oblique — she is outright cherry-picking at this point. She also defends the use of the gold standard — something even right-leaning economists and historians agree worsened the Depression. Shlaes, of course, goes on to paint the favorite New Deal denialist target, the National Recovery Administration (NRA), as the centerpiece of the New Deal. The NRA did devolve into crony capitalism, but was junked as early as 1935 by the Supreme Court and suggesting that it was the "centerpiece" of New Deal legislation is disingenuous at best.[note 4] It is, however, convenient to use to paint FDR as a commie and fascist, which she delights in, comparing him to Stalin and Mussolini.[5][6] She even goes so far as to decry an expansion of FDA powers as "theft." Right, screw clean and uncontaminated food!

Once we get to the Roosevelt Recession, the idiocy only gets worse. No, it had nothing to do with Roosevelt's reversal of monetary and fiscal policy. You see, it had everything to do with "predictability" and "uncertainty" in markets, the weasily escape hatch that Shlaes can invoke anywhere she wants. Coolidge and Mellonnomics were predictable: "Do nothing." So that meant the market would fix everything because conditions were "predictable." Despite the fact that the heaviest regulations under FDR were gone with the dismantling of the NRA, Shlaes blames the Wagner Act, which protected unions' rights to actually be unions, for creating "uncertainty." Unions at the time fought for such outrageous things like basic subsistence wages, which cut into corporate profits and thus wrecked the economy, causing the recession within a depression somehow. Yep, keep ignoring FDR's policy reversal, it had to be unions that did it.

Ironically, at one point, she admits that spending did have a positive effect on the economy, then promptly ignores her own statement and launches into attacks on government spending. So much for consistency.

Actually, Shlaes' work ought to be read as a lesson in how history plays a role in the present and how it can be distorted for ideological purposes. Any crap you hear on the television set about the "failure" of the New Deal can most likely be traced back to this one book. Senator John Barrasso (R-WY) has said, "In these economic times, a number of members of the Senate are reading a book called The Forgotten Man, about the history of the Great Depression, as we compare and look for solutions, as we look at a stimulus package."

Conservatives need to keep shoving FDR's legacy down the memory hole. You can thank Amity Shlaes for that.