The Great Depression of 1929 to the late 1930s was the largest economic downturn in the history of the modern world. Although market's boom and bust cycle has been producing a bust roughly every few decades or so since the early 19th century, this was the worst.

The Roaring Twenties come to a close[edit]

The atmosphere of the late '20s (financially speaking at least) can be summed up in the following (likely apocryphal) anecdote. In the winter of 1928, Joe Kennedy decided to stop to have his shoes shined before he started his day's work at the office. When the boy finished, he offered Kennedy a stock tip: "Buy Hindenburg." Kennedy soon sold off his stocks, thinking:

A timely move considering that the stock market would soon resemble the fate of the airship Hindenburg itself.

Like most historical events, the Great Depression was multi-causal. We all know about the stock market crash, but whether the crash was a cause or a symptom of underlying weaknesses in the economy is a subject of much debate. For non-wonk purposes, it's usually treated as a proximate cause. The following factors are widely accepted as playing a role in the decline:

Hoover and his Press Secretary in the Oval Office.

Wherever Herbert Hoover intervened, he either didn't intervene enough or got it backwards: 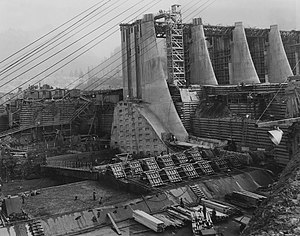 Construction of the Bonneville Dam in Oregon during the New Deal era.
See the main article on this topic: New Deal

The economy continued to nosedive heading toward the 1932 election. Everything bottomed out around 1932-1933, but many expected things to (somehow) keep getting worse. The banking system had not completely stabilized. Not only had Hoover become wildly unpopular because of the Depression, the tide began to turn against him on Prohibition as well. Not to mention the Bonus Army of veterans that marched on Washington, who he turned away. Hoover's platform basically consisted of "It's gonna get better, promise!" Franklin Roosevelt ran as a fiscal conservative in some places and touted a "New Deal" in others. He wasn't very specific about what would be in it, though, he mostly talked about "reform."

Although FDR, then governor of New York, was still seen as a political lightweight at the time, he easily trounced Hoover and the Democrats took the majority in Congress. The election of 1932 was a significant political realignment. The Republican Party was in shambles; not only had Hoover ruined their reputation, the rift between the conservative wing ("Taft Republicans") and the progressive wing (think Teddy Roosevelt) was blown wide open. Hoover's racial gaffes allowed FDR to pick up the black vote. He also picked up the youth vote, the immigrant vote, the labor vote (labor had actually gone mostly Republican up until this point) and the old white guy vote.[1] This was known as the "New Deal Coalition."

Some stuff that happened in FDR's first term:

Alf Landon ran against FDR in 1936 on a platform of "I can do the New Deal, but better." He lost in a landslide, despite the increasing radicalization of wingnuts like Father Coughlin and the conservative wing of the Republican Party. FDR was demonized as a communist, fascist, etc. FDR's response? "I welcome their hatred!"[2]

In any case, FDR took the advice of the conservatives in his cabinet and tightened the belt on spending. (See the page on the Roosevelt Recession.) While most of Europe was coming out of the Depression, the US sank into a recession within the Depression. FDR's court-packing plan was also an unpopular move. Technically constitutional but still a fairly naked power grab.

The Roosevelt Recession, also known as The Recession of 1937-1938, was a recession within a depression.

By 1936, GDP had climbed back to pre-1929 levels but unemployment was still a problem. In 1937, FDR's cabinet proposed reverting to a policy of fiscal conservatism. FDR had actually run as a fiscal conservative in 1932 and completely switched gears because of a pragmatic approach to politics as well as hijacking the programs Herbert Hoover had instituted and mixing them with ideas former New York Governor Al Smith had used in his home state. In addition to this, he hoped to throw a bone to some of his advisors and the Republicans calling for austerity measures (Sound familiar?). Taxes were raised, FDR attempted to balance the budget, and the Federal Reserve ran a contractionary policy. The huge gains made in 1936 and most of 1937 were lost and the economy reversed itself.

FDR blasted trusts and monopolies for causing the downturn, but they in fact had little to do with it. Keynesians blame it on the balanced budget policy, cutting spending and increasing taxes at an inappropriate time. The WPA and PWA payrolls were severely cut. Monetarists blame it on the Fed's tight credit policy. Similarly, the Hangover Theory basically says the hangover starts when you stop drinking and is worse the longer one has been drinking. Either way, both actions had the same effect: Taking money out of the economy. In reality, it was probably a double-whammy coming from the monetary and fiscal sides.

John Maynard Keynes was in correspondence with FDR and warned against such policies. In 1938, he sent a letter outlining what should be done to fix this new recession.[3] FDR turned back on his newfound fiscal conservatism and reimplemented New Deal policies. Workfare programs were greatly expanded once again. This is sometimes referred to as the "Third New Deal." The Fed reversed its policy as well and eased credit. While FDR had lost the political capital to fully implement another set of stimulative policies on the order of the first two New Deals, the economy began to climb back to its previous position. By the end of 1941, as America mobilized for war, the economy had regained what it lost during the Roosevelt Recession and then some. New Deal critics often dispute this, pointing out that government spending had decreased on the whole in 1938. This is irrelevant. Stimulative policy is supposed to add money to the economy through deficits, not merely increased spending. Spending money that is taxed out of the economy is just shuffling it around; only deficits create monetary expansion and the deficit did indeed increase. Outlays on the whole also increased every year after 1938 and, of course, deficits and outlays exploded during World War II.

FDR's return to increased spending made him increasingly unpopular among the wingnuts. Hoover blasted FDR for taking the nation toward socialism in the '36 election. Various wingnuts like Father Coughlin accused FDR of being a commie/fascist/tool of the Jewish bankers/insert conspiracy theory here. (Sound familiar?). His court-packing plan in 1937 didn't help matters any.[note 2] Ironically, the Supreme Court had gotten into the habit of scrapping what are now considered to be his worst programs like the National Industrial Recovery Act (NIRA) and Agricultural Adjustment Act (AAA) and leaving the rest alone for the most part.

New Deal critics often like to gloss over FDR's policy reversal in 1937 to paint the New Deal as a failure in its entirety. The Roosevelt Recession was a setback and without it, it's entirely plausible that the US would have been out of the Depression entirely before World War II. The US actually took longer to get out of the Depression than most other nations - the evil Swedes, for example, ran a very hardcore stimulative policy and was back to pre-crash levels by the early '30s. The fact is, 100% of the time during the Great Depression, the economy was improving when FDR ran deficits and faltering when he practiced fiscal conservatism.[4] Occasionally, critics will point to "increased regulations" or "poor business confidence" as a result of these regulations as causes of the recession. This is bullshit for multiple reasons. One, they rarely if ever point to anything specific, making this explanation extremely weasely. Occasionally, they will point to the Wagner Act passed in 1935, which...(gasp!) protected workers' right to unionize. And it wasn't even heavily enforced at that point. Two, the most harshly regulatory of FDR's policies, the NRA, was ruled unconstitutional in 1935. And even under the NRA, the economy was still growing quite speedily.

By 1939, the US was recovering again and FDR became more involved in foreign affairs, specifically the whole Adolf Hitler thing. Heavy re-armament of US forces continued to help the nation recover, but the recovery was not complete until the US entered World War II. FDR beat Wendell Willkie in the 1940 election, but by a much slimmer margin than his previous elections.

The Great Depression was an ideal occasion for the brief rise of a number of personalities and movements (both wingnut and moonbat), promoting woo as a purported ticket out of the Depression, including:

Sinclair Lewis' chilling novel about the rise of fascism in the U.S., It Can't Happen Here, featured Buzz Windrip (probably an amalgamation of some combination of these three: anti-Semitic preacher Gerald Winrod, Louisiana's dictatorial governor Huey Long, and the repressive colonial-era military governor of Puerto Rico, Blanton Winship) rising to power with the support of Bishop Prang (modeled after Father Coughlin).

Economic hardship during the Depression displaced a lot of people. A large number of teenagers were forced to leave home to look for work because their parents could no longer support them, and dustbowl conditions led to a mass migration from the midwest, especially Oklahoma and Arkansas, to California. A popular culture grew up around such displaced people with the most popular including Woody Guthrie's folk music, John Steinbecks 1939 novel The Grapes of Wrath and the 1940 film adaptation, the songs "Big Rock Candy Mountain" (Harry McClintock) and "Brother Can You Spare A Dime" (E. Y. "Yip" Harburg and Jay Gorney), and King Vidor's 1934 film Our Daily Bread. Novels and films from that era tended to run in two opposing directions: the realism school of fiction portrayed the hardships of the working class while sometimes also romanticising them, while others went in the other direction of escapism and portrayed the lifestyles of the wealthy. The period was rife with moral panic with a lot of drug scare movies like Reefer Madness, but conversely was also an era in which open inquiry and freethought flourished, typified by the popularity of Haldeman-Julius Publishing's Little Blue Books.

This influence on popular culture has continued to echo in influence in the U.S. The folk music scene typified by Woody Guthrie and the romanticisation of migratory people in general were both influential on the late 1960s hippie movement, while occasional popular films continue to play to the realism school of Depression-era fiction, examples being 1967's Bonnie and Clyde, 1973's Emperor of the North, and the more recent Seabiscuit and O Brother, Where Art Thou? The Civilian Conservation Corps, a Depression-era jobs program for young men, likewise continues to be cited as a model for programs today like Americorps, and is often romanticized as a golden age of construction due to the CCC's having built many buidings and trails in today's national and state parks.