Graphs! But first, some Flapper art.

The percentage of wealth owned by the rich during the '20s was at a peak. 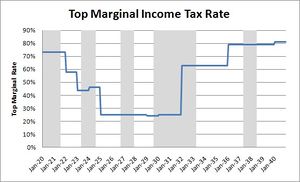 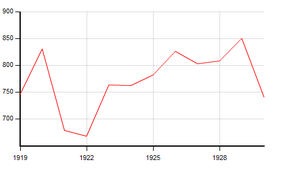 The Roaring Twenties (aka Roaring '20s or the Jazz Age) refers to the period of economic expansion in America and Western economies in general during the 1920s. Because the grade-school version of the Roaring '20s tends to boil down to "good times 'n flappers," further wingnut and Fox News revisionism has built on top of this to paint the period as a new golden age.

Right-wing myths about this period often draw on the "work" done by Amity Shlaes in her book The Forgotten Man. The Roaring '20s came to an end in this alternate-universe history when FDR Herbert Hoover passed the Hoot-Smalley Smoot-Hawley Act.[1]

Pseudohistorical wingnut claims are usually a variation on one of these points:

The Twenties as a golden age[edit]