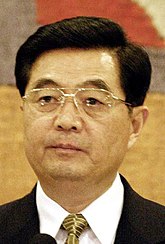 Hu Jintao was (from 2002 to 2012) the Paramount Leader of the People's Republic of China, a position formerly filled by Chairman Mao Zedong, Deng "Tiananmen Square" Xiaoping, and a couple of other people who did little of note. Coming from a humble background, Hu rose through the ranks to head the CCP's Youth League and administrator of an integral part of China before becoming Communist Party's general secretary and the preeminent fashion icon for its legions of hip young bureaucrats. His term as Party General Secretary ended in November 2012, and he was succeeded by Xi Jinping.

In this role he advocated a "peaceful development" of his country; this involves overseeing construction of their first aircraft carrier, stealth fighter plane, fast attack boats and the largely-defensive weapon of Dong Feng missile.[note 1] This was very successful, and so obviously helped to prevent trouble further down the line, and also aided good long-term relations with the USA, and other countries.

Domestically, he promised the Chinese people to build a "harmonious society" that is supposed to alleviate the sharp divergences in income and wealth that developed in the wake of China's economic opening. It has also helped to "harmonize" the sharp divergences of opinions held by dissidents such as Liu Xiaobo or Ai Weiwei.[note 2] This has so obviously made the lives of the majority of people better, and made some good progress for poor people in China who are now living in better conditions than ever. It so obviously proves that "socialism with Chinese characteristics" a.k.a. Chinese communism is good, and that Hu's leadership was strong and stable.

This communism-related article is a stub.
You can help RationalWiki by expanding it.
Retrieved from "https://rationalwiki.org/w/index.php?title=Hu_Jintao&oldid=2450209"
Categories:
Hidden category: