The internet, Internet, interwebs, or internets is a practically unregulated place full of strange, depraved people screaming nonsense at each other and jerking off.

What we colloquially call "the internet" is a global network of smaller computer networks, numbering in the millions. It is not to be confused with the "World Wide Web" which gives us the www subdomain, or real life. 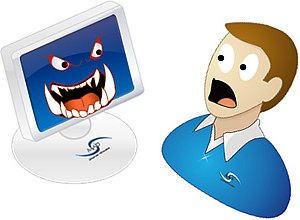 Use it at your own risk.

What most people call the "Internet" is actually the World Wide Web, as the general public will use the terms interchangeably.

The Internet began as several computer linkages within the state of California. While most people think the Internet was created in the late 1980s or early 1990s, when the World Wide Web formed, the Internet actually began in 1969, and has roots which are much older than that. The de facto creation occurred in October 1969, with what was called the ARPANET, when "e-mail" messages were first exchanged by two university computers: one at Stanford University, and the other at U.C.L.A.[2] Through a series of various developments and incarnations in the 1970s, this later gave way to TCP/IP by 1982, whose final form (well, mostly excluding IPv6) is today's Internet.[3]

By contrast, the World Wide Web, which was developed in 1989–1990 and publicly launched in 1991, is a series of tubes collection of hypertext documents and domains that use the internet via web servers.[4] It took until about 1997 for this to become anything like today's internet[5], and computer speeds have increased exponentially since then. Few imagine that the internet existed before the 1990s, but it was very much around. It was used mainly by the government, the military, and university personnel[6], as only they were able to afford the computing resources required. Even the "mini" computers

then in use were the size of file cabinets, and needed more or less constant expert attention.

See the main article on this topic: Snopes.com

The Internet is Sturgeon's Law ("90 per cent of everything is crap") taken to the extreme. It is even worse, as much of the information is old and potentially out of date. The important thing to realize is that anybody can set up a web site which means that its reliability is questionable. According to the New York Times, social media plays a big part in spreading misinformation:[7]

Hoaxes often gurgle up from the bowels of Facebook, as shares from sites that claim to mix satire with the truth, like The Rightists, or sites that don't seem to exist for any particular reason but to fool people, like one called The Denver Guardian.

The US[14] and Australia[15] are both known for having notoriously slow Internet access speeds for the amount of money they make. There's a reason for this. The US Internet access market is ruled by three ISPs, who have deliberately split the market amongst themselves to avoid having to compete.[16] In Australia, it's even worse, with Telstra being the main ISP, with no viable competition.[17] If that's not bad enough, because of this, accessing the Internet is ridiculously overpriced, being several times more expensive than the far better access in other developed countries. Also, the Abbott Government killed a plan to bring Gbps-range fiber optic access to most Australians by 2020, watering it down to 25 Mbps in the regions where the infrastructure was already built-in.

Many have claimed the internet is "corrupting children" by exposing them to ideas and beliefs that are alternative to those taught by their parents the leebrals and those who deny Her existence, and often using the good old days argument. Despite allowing faster communication than ever in human history, many claim that it creates antisocial losers, rather than finally giving them a place where they fit in. Many claim that nobody reads books anymore. That claim is true if you ignore e-books, online encyclopedias, internet writing, and the fact that more people are reading books than in the past.[18][19] Also, physical books are still pretty relevant, even amongst the youth. Another claim that the internet is making us more dumber. The internet gives us access to all the knowledge of humanity at the click of a button.

Finally, the internet's blasting can be compared to a certain other advancement. When the masses finally gained literacy, many slammed reading for all of these things. That it corrupts, and makes us stupid. Even Socrates criticized it, saying "[The written word] will create forgetfulness in the learners' souls."[20][note 1] Hieronimo Squarciafico, a 15th-century Venetian editor, complained, "Abundance of books makes men less studious," in reaction to the rise of the printing press.[21] So the opposition is mostly just jumping on a millennia-old bandwagon of criticizing new technology and ideas (not to mention, implying that humanity was better off when information was less accessible, especially for less privileged populations). So when someone says the internet is ruining society, don't listen to them. They're merely following the trend of criticizing advancement.