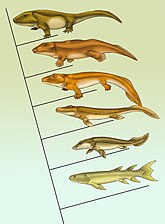 A cladogram of the evolution of tetrapods showing the best-known transitional fossils. From bottom to top: Eusthenopteron, Panderichthys, Tiktaalik, Acanthostega, Ichthyostega, Pederpes.

Ichthyostega was a Paleozoic stem-tetrapod, about 4 to 5 feet long, that lived during the Devonian epoch and had adaptations for living in water as well as on land. Ichthyostega had seven digits on its hind limb instead of five, and its limb bones included a humerus and a femur as with later tetrapods. Ichtyostega had a strong rib cage that could support the animal's lungs, thereby enabling it to breathe on land but probably restricting the animal's side to side movement. Its ear also was apparently adapted to hear both on land and in the water. Ichthyostega also had gill arches as well as lungs.[1][2]

The fused rib cage almost certainly restricted the movements of Ichthyostega on land and it is impossible to reconstruct what the animal did there.

This evolution-related article is a stub.
You can help RationalWiki by expanding it.