Idolatry is a rather contentious and misunderstood term, so it is perhaps best to begin with a dictionary definition of the word:

Usage as a Snarl Word[edit]

Idolatry (along with idolater) is widely used as a snarl word by followers of Abrahamic religions to attack both followers of other religions and also, ironically, atheists. The Old Testament and the Qu’ran are both excellent sources for attack, having plenty of passages on this topic that are well suited to quote-mining, for example:

But to the cowards, unbelievers, detestable persons, murderers, the sexually immoral, and those who practice magic spells, idol worshipers, and all those who lie, their place will be in the lake that burns with fire and sulfur. That is the second death. —Revelation 21:8

For you can be confident of this one thing: that no person who is immoral, impure, or greedy (such a person is an idolater) has any inheritance in the kingdom of Christ and God. —Ephesians 5:5

But now I am writing to you not to associate with anyone who calls himself a Christian who is sexually immoral, or greedy, or an idolater, or verbally abusive, or a drunkard, or a swindler. Do not even eat with such a person. —1 Corinthians 5:11

They paid allegiance to worthless idols, and so became worthless to the Lord. —2 Kings 17:15

and so on and so forth…

Modern Abrahamics (not just Christians) have used these shining examples of tolerance and intellectual honesty as a solid foundation for using the term in the modern era as a snarl word against modern real or perceived enemies, including celebrity culture,[2] Neo-Pagans,[3] environmentalists,[4] liberals,[5] and even other sects of their own religion, not to mention others.[6]

However, there is a divergence between idolatry as perceived by Abrahamics, and the literal meaning of the dictionary definition shown above, which hints at the actual use of idols within non-Abrahamic religions.

The Abrahamic view of idolatry could be summarized as "idol worship", that is, literally the worship of an idol itself:

They worshiped their idols, which became a snare to them.—Psalm 106:36

Those who worship worthless idols. —Jonah 2:8

I hate those who serve worthless idols. —Psalm 31:6

But to the cowards, unbelievers, detestable persons, murderers, the sexually immoral, and those who practice magic spells, idol worshipers, and all those who lie, their place will be in the lake that burns with fire and sulfur. That is the second death. —Revelation 21:8[note 1]

Denying the divinity of "graven images"[7] served as a convenient touchstone for right-thinking Old-Testament Israelites; it distinguished the Chosen People[8] from their idol-oriented neighbors in the ancient Middle East who dealt with false gods,[9] and fed into Islamic distrust of pictorial representations and into Christian iconoclasm.

Practice of Idolatry and Contrast With Abrahamic View[edit] 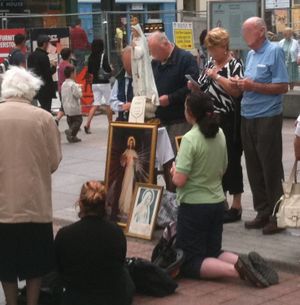 Catholics kneeling before statues, enjoying a good old pray. It's not idolatry, its... erm.. well... It's just not!

The actual use of idols in all major religions, in either current or past literate societies, is and was rather different from the practices and beliefs described in Abrahamic religious texts.

In Ancient Egypt, idols were a prominent feature of both state and personal religion, as evidenced by plentiful archaeological finds.[note 2] In addition the importance of idols is made abundantly clear in Egyptian literary texts, both religious and secular, which refer to the production or transport of idols in practical terms.[10]

However, it is also very clear that the idols themselves were not the object of worship. Egyptian literature makes it clear that the idol acted as conduit for the God it represented upon Earth, acting, in effect as body for the God in the physical realm.[11] In addition, it is worth noting that the physical nature of the God could vary in both appearance and in location. Thus a God was not bound to one image. There could be many images of the God in different locations at any one time, and these might take on a variety of physical appearances, thus further undermining the Abrahamic view that the idol was the God itself, and the object as well as the focus of worship.

This view of idols in its broadest sense, as the focus, not object of worship, was common to other religions of both the Bronze Age and the Classical Periods, and much of it is also true to modern religions that make use of idols or icons, including Hinduism [12] Buddhism, Shinto and others.

In conclusion, the Abrahamic charge of "idolatry" aimed at followers of other religions is a straw man absolutely divorced from the actual practice that it purports to describe. Its usage to attack certain modern "evils" is likewise just a snarl word, and an attempt to link a group the attacker dislikes as "sinful".