Head of St. Ives in France. He's the patron saint of creepy objects in boxes.

In the context of religion, relic is a technical term describing items (such as human remains, historical artifacts, old weapons, bits of a building, etc.) that are held specifically for veneration or worship.[1] Relics can be found in most religions, though what the relics mean to the people, and how they are viewed as religious or magical items, varies greatly. They are generally most important in Christianity, Islam, and Buddhism.

Typically, believers preserve relics and isolate them from non-sacred acts by the building of temples or shrines to hold the relics, housing the relics in special boxes, or insuring that only particular people can see or touch them. Buddhism, for example, has a long history of including hair, nails, teeth[2] or bits of bone in the clay used to make pottery, which is then formed for a temple and kept isolated.

Relics appear in the Old Testament. It could be argued that the Ark of the Covenant, containing the bits of the Ten Commandments, was a form of relic.

The Ethiopian Church has long claimed to possess the Ark itself, in a chapel in Aksum. It is, of course, kept conveniently hidden from any and all who might wish to see or examine it.[3] Jewish histories claim that the Ark was lost after the Bablyonians sacked King Solomon's temple in the 4th century BCE, but the Ethiopians claim that it was secreted away far south to their country for safekeeping.[4] The story isn't quite as out of left-field as it might seem. According to the Ethiopian legend, King Solomon conceived a child with the Queen of Sheba named Menelik I, from whom the entire imperial dynasty of old Ethiopia was said to have descended.[5] Thus, at some point, Menelik's people "borrowed" the Ark.

In Catholic theology, relics of saints are kept "in order the better to adore Him whose martyrs they are."[6] The Catholic Church separates relics into three classes.[7][8] First-class relics are items directly involved in the life of Christ or a martyr, or physical remains of a recognized Catholic saint. Second-class relics are important items in a saint's life, such as their crucifix, Bible, rosary, etc. Third-class relics are objects which have been touched to a second-class relic.

Although disproved by carbon dating in 1988,[9] the object believed to be Christ's burial cloth still draws millions of tourists.

Alleged fragments of the True Cross appear all over the Christian world. The same can be said for the thirty-or-so supposed "Holy Nails," which are even more absurd due to the fact that Christ was crucified with, at most, four.[10] Probably the most famous instance is the Iron Crown of Lombardy, which contains a ring of iron said to be a reshaped Holy Nail.[11]

Meanwhile, an alleged Holy Lance was claimed by Charlemagne, although it was actually created in the 7th century CE. Charlemagne likely knew this relic was a fake, however his claim as the successor to the Roman Emperors needed to be able to compete with that of the Byzantine emperor, who owned a large number of Christ's relics.[12] The "Lance" became a part of the Hapsburg Crown Jewels and is now in Vienna.

Other relics claimed to be from Christ's life abound. His sweaty, stinky sandals are said to be in Germany,[13] while His robe is either there or in France,[14] while a shred of His blood-stained shirt is in Belgium.[15] Let's not even get started on his Holy Foreskin.

Relics from saints, on the other hand, are too plentiful to be counted without risking extreme boredom. In the New Testament, certain relics that had been touched by Saint Paul were said to have the power to heal the sick:

St Teilo, a Welsh monk and bishop, is said to have miraculously had three dead bodies (through some kind of duplication process), so three churches could all have the full set of relics.[16] The alternative, they they don't all have genuine Teilo, is so horrible that surely God would never allow it.

Relics were common throughout the early Church, so much so that during the Council of Nicaea, it was a requirement that each altar have relics built into it.[17]

This explains the prevalent and ongoing Roman Catholic practice of chopping their most revered religious figures into tiny bits after death and distributing fragments of their remains to congregations around the world, rather than letting them rest in peace. Throughout the Catholic world, relics are present in the Churches, altars, and other holy sites. Protestant religions are far less likely to maintain relics, especially human remains. John Calvin was a major opponent of keeping relics, as was Martin Luther.[18] This was a major contributing factor in the Protestant Reformation.

The veneration of relics is equally important in Eastern Orthodoxy. The religion considers the physical form, and not just the soul is transformed by holiness; thus relics are revered as "temples of the Holy Spirit."[20] One of the great cultural tensions that exists in the Orthodox Church is the lack of emphasis placed by American Orthodox followers on the importance of relics.[21] Another Orthodox belief is the concept of "incorruptibility", the idea that true saintly relics do not decompose normally after death.[22] Evidence of "incorruptibility" includes intact hair and fingernails, visible eyebrows and eyelids, and having the hands still holding the cross with which the individual was buried.[23]

Eastern Orthodoxy does not enforce the strict classification system of the Catholics, but it does recognize relics as being related to the life of Jesus Christ. For instance, one of the competitors to the claim of being the true Holy Lance is in Armenia.[24]

With the outsized influence of reformist Islamic movements like Wahhabism and Salafism, which reject the veneration of relics, there is increasingly the erroneous belief that Islam as a whole has a negligible tradition of keeping relics.[25] Historically, however, classical Islamic thinkers posed many justifications for the veneration of relics and Islamic relics were and are highly prized.[26] Perhaps most notable are the various relics collected by the Ottoman Turks which are claimed to be from the life and body of the Prophet Muhammad.[27] The Turkish government still cares for and maintains the relics, among which are allegedly Muhammad's beard, tooth, sword, and writings.[28]

Despite their Wahhabist beliefs, even Saudi Arabia has reluctantly permitted the veneration of at least one relic at Mecca. Near the Kaaba is the "Maqam Ibrahim" or "Station of Abraham", a rock with what are allegedly the prophet Abraham's footprints.[29] Muslims make prayers there during their final circuit around the Great Mosque of Mecca. Abraham's footprints are also strangely shaped and much larger than a normal human being's feet. The Kaaba and its Black Stone are also arguably relics as well.

The Temple of the Tooth after the terrorist attack.

Buddhist relics are referred to under the catch-all term of Śarīra. Buddhists do not worship these relics, but do preserve them for veneration under the belief that relics can provide a connection to old masters of the religion, including Gautama Buddha himself.[30] Buddhist tradition holds that Buddha was cremated after his death, and his ashes divided among his followers; various sites and countries around the world claim to possess these relics today.[31] Fragments of Buddha's teeth and strands of his hair are also alleged to still be around. In Buddhist cultures, destruction of a relic was historically considered a crime on par with the murder of a human being.[31]

One of the holiest Buddhist temples is in Sri Lanka and allegedly contains one of Buddha's teeth. The Tamil Tigers attacked it with a truck bomb in 1998, killing 11 people but failing to destroy the tooth.[32] The attack shocked the majority Buddhist nation, and the New York Times quoted a man as saying, "You terrorists, kill us, eat us, but don't attack our shrines where Buddha lives."[32]

One of the unique versions of a Buddhist relic is the sarira where the above word is derived. These are believed to be pearl-like colored stones allegedly left behind when a great Buddhist monk is cremated.[33] There's a whole classification system and mythology surrounding them. The pearls are said to grow within the human body, with yellowish ones coming from the liver, whitish ones coming from the head, and so on.[33] It is most likely that sarira form naturally during the cremation process. Under certain conditions, human bones can form a variety of crystalline structures through the application of heat.[34] 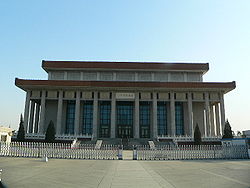 Although this authoritarian brand of communism was and is staunchly atheist, observers couldn't help but notice their tendency to preserve the corpses of their former leaders and place them in "secular cathedrals".[35] Instead of relying on religious dogma for preservation, though, the communists used a variety of chemical preservation methods and even allegedly stuffed some electric environmental control devices into the corpses cavities.[36] Ilya Zbarsky, who was a member of Lenin's embalming maintenance team at the Research Institute for Biological Structures in Moscow, revealed to the BBC how Russia continues to maintain Vladimir Lenin's corpse: "Twice a week, we would soak the face and the hands with a special solution. We could also improve some minor defects. Once a year the mausoleum was closed and the body was immersed in a bath with this solution."[36] The Russians got so good at body preservation that the Vietnamese government would fly Ho Chi Minh's corpse out to Moscow for the same treatment. This is, as you might guess, a much more intensive process than the regular embalming you'd see for a funeral. Embalming is temporary and only meant to last until the casket closes, while communist corpse preservation is meant to last indefinitely and keep the corpse viewable to the public.

Vladimir Putin has publicly compared Lenin's corpse to a Christian relic at least once before.[37] Even after the downfall of the Soviet Union, Russian guards are still determined to force guests to seem at least outwardly deferential.[38] Still, most visitors to the dead commie these days are morbidly curious or history buffs rather than genuine Lenin devotees.

Ho Chi Minh's corpse is among the most controversial. It's rumored that the corpse is a fake, and it doesn't help that the Vietnamese honor guards use dim lighting and a constantly moving line to ensure that photos of it are incredibly difficult to get.[39] The Vietnamese remain among the most zealous in guarding their dead former leader. It's under 24-hour guard by riflemen carefully selected for their patriotism; the site is usually busy with Vietnamese civilians making pilgrimages there to honor their country's founding father.[40]