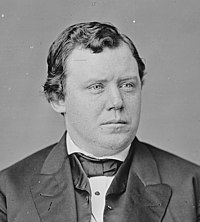 Ignatius Loyola Donnelly (1831–1901) was an American Congressman and fringe scholar. He wrote about Atlantis, Catastrophism (a comet impact affecting ancient civilizations) and the Shakespeare authorship question (he believed it was Francis Bacon). His writings influenced Helena Blavatsky, Rudolf Steiner, Edgar Cayce, Immanuel Velikovsky and many other purveyors of woo.

Ironically, he's named after the founder of the Jesuits.