Atlantis is the name given to a mythical island first mentioned by the Greek philosopher Plato in his dialogues Timaeus and Critias.

According to Plato, Atlantis lay beyond the "Pillars of Heracles" (generally assumed to be the Rock of Gibraltar

, which would presumably place the island in the Atlantic Ocean. Plato claimed that Atlantis was an important naval power around 9,000 years before his time and that it had attempted to invade the Eastern Mediterranean (including Greece and Egypt). Sadly, the island suffered some sort of catastrophe and was swallowed by the sea in a single day. Present-day historians universally regard Plato's claims about Atlantis as literary fiction.

Over the years, Atlantis went from a cautionary tale about hubris to a legendary land of ancient high technology and whizzy powers, and ultimately a beloved meme of Spiritualism, Theosophy, and eventually the New Age movement. It is the most famous of many myths about lost lands disappeared beneath the waves. 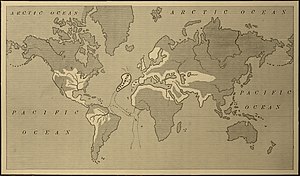 Map of Atlantean influence, according to Ignatius L. Donnelly‎ (1882)

It is not known if Atlantis was a whole cloth invention on Plato's part, invented to explore philosophical ideas, or if stories about it were inspired by real events that may have happened in the Mediterranean Sea. Attempts to place it within mainstream history have mostly centered on the Minoan and Mycenean civilizations. One of the main contenders for the title of Atlantis is the island of Thera, which was mostly destroyed in 1628 BCE when the volcano on which it was located erupted (modern Thera, aka Santorini, is a crescent-shaped assembly of three islands surrounding two central, constantly steaming volcanic islands). The eruption of Thera was probably a major factor in the collapse of the Minoan civilisation; and indeed there was a major Minoan city, Akrotiri

, on Thera which was destroyed by the eruption. The problem is that Thera is firmly in the Mediterranean, not outside of it, although Plato may have changed the location for the purposes of his story.[1]

Extensive mapping of the seafloor has revealed that there is actually very little continental crust under the oceans, and virtually none of it is in the Atlantic Ocean, apart from continental shelves. So far, the only evidence of Atlantis being an actual continent in the Atlantic is the occasional mapping artifact.[2] Notwithstanding the complete lack of evidence for any large island existing in the Atlantic, there are still those prepared to imagine such a thing as part of a lost prehistoric civilization. Potential candidates for the "real" Atlantis still continue to be put forward and virtually everything to the west of the Straits of Gibraltar (the only concrete description of its location according to Plato) has been suggested. Some have suspected Atlantis to somehow refer to the South American continent, as there are raised plains that can be associated with descriptions in the written legend. Another claim made in 2011 cites the discovery of a sunken city off of the coast of Spain, which does bear some resemblance to Plato's description, such as its location being west of Gibraltar and the city being swamped by a tsunami.[3]

believes the story of Atlantis may have been the result of a story from India. Significant amounts of continental shelf exist across the western shore of India, including under the Gulf of Cambay,

where some remains of submerged settlements have been discovered in the 21st century. Isomäki's theory posits that stories of settlements ending up underwater could have reached the Ancient Greeks via the Egyptians. Without a clear point of reference, the Greeks would not have known that the places of the stories are located east from their location.[4]

It is sometimes suggested that myths about Atlantis and other lost lands, as with the flood myths found in many world religions, may reflect distant memories of rising sea levels after the end of the last ice age; there was a small land bridge to the west of Gibraltar lost around 9000 BCE.[5] They may also be influenced by instances of suddenly rising sea level such as the Black Sea becoming connected to the Mediterranean around 7500 years ago.[6][7] Many inundations, as with the Black Sea, seem far too long ago for memories to persist, but more localised tales of land loss, which is a permanent problem in coastal communities, may have influenced myths.

Quite a few superheroes claim to be from Atlantis; the most famous among them are Aquaman[8] and Namor.[9]

Richat Structure, also known as the Eye of Sahara, is a highly unusual eroded rock dome roughly 20 km across, deep in the Sahara Desert in Mauretania.[10] Mainstream geologists have conclusively determined that its origin is entirely terrestrial and no meteorites were involved.[11] Thanks to satellite imagery of the entire Earth becoming readily available in the last decade, the strange appearance of this formation has attracted the attention of various woo peddlers. In particular, the YouTube channel Bright Insight, a heavy proponent of ancient aliens and various conspiracy theories, has posted a video essay identifying it as the former location of the city of Atlantis, claiming that the concentric features visible from space are actually remains of moats and walls, and that the dimensions match Plato's description.[12] This 'discovery' gained some traction in the tabloid press.[13]

Helena Blavatsky considered Atlantis to be the ancestral homeland of all modern human races. In reality, paleontologists have concluded that humans as a species originated in eastern Africa. Quite a bit of modern woo is said to date from Atlantis: the island would eventually become a common trope in science fiction and fantasy writing, for example as the lost continent of Númenor in the writings of J. R. R. Tolkien,[14] or the setting of the science fiction show Stargate Atlantis. It's even one of the secrets you can find on the deep web.

There are, allegedly, connections between Atlantis, Hitler and Nazism. One relatively reasonable suggestion is that Hitler based his views about the supposedly superior Aryan race on what he imagined the people of Atlantis had been like. This is plausible but the chief proponent of this claim has no evidence except unrevealed confidential sources, so historians cannot assess the claim. A less plausible story is that Hitler escaped to Atlantis after Berlin fell. There was no body and DNA evidence was not yet possible in 1945 so speculation that Hitler might have escaped was reasonable then. But why Atlantis? Hitler was an inhabitant of Atlantis who fell to the dark side.[15]

Legends about lands lost beneath the waves are common in many parts of the world. Usually these lands are places of wonder, prosperity, and advanced science or wisdom. Some are tied in with ideas about a lost Golden age, while others have been joined up with other myths such as Arthurian legend. Aside from Atlantis, other lost lands include