Income redistribution, in its most basic form, is the taking of income from one person to be given to someone else. This could be anything from the complete confiscation of a person's income to give to someone less fortunate than them (seen in no current Western nation), to a tax on the vast majority in order to support a minority of completely disabled people. 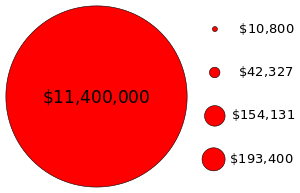 Comparing a range of yearly salaries in the US - pointing out the disparity between welfare-level incomes of $10,000, "middle" incomes of $42,000 and those of top CEOs (measured in the millions). The sheer scale of the differences has long been used as a supporting factor for income redistribution.[1]

When presented this way, most people have no issues with income redistribution. However, many conservatives and libertarians oppose any form of income redistribution as theft.[citation needed] One set of reasoning is that if one man takes money from you he is a thief, if a hundred men take money from you they are a crime family, and if ten thousand men take money from you they are a government. This is coupled with the belief that the morals of taking money do not change depending on the number of people doing the taking (from one thief to a ten thousand strong government).

The other rationalisation of the opposition to income redistribution is that it is punishing people for being productive and earning money while rewarding those who are not productive. (With "productive" meaning "playing golf while some other people do all the actual work," presumably.)

This economics-related article is a stub.
You can help RationalWiki by expanding it.
Retrieved from "https://rationalwiki.org/w/index.php?title=Income_redistribution&oldid=2295689"
Categories:
Hidden categories: