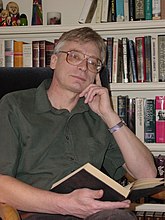 Hans-Hermann Hoppe (1949–) is an anarcho-capitalist political philosopher, Austrian school economist, and founder of the Property and Freedom Society. Hoppe is a US-style right-wing libertarian in the Rothbardian tradition. He advocates capitalist control of all sectors of society, cultural conservatism and anti-empiricism.[2]

Probably best-known for his disdain of democracy (one of his books is entitled Democracy: The God that Failed), Hoppe frequently mingles with and hosts white supremacists at events and talks due to his dislike for political correctness. Even other libertarians think he is just a bit unhinged.[3][4][5]

Triple-H graduated from the public University of Frankfurt, Germany, with a PhD in economics. In order to be around his mentor, Murray Rothbard, Hoppe moved to New York City and, later, when Rothbard went to the University of Nevada, Las Vegas (UNLV), Hoppe became a professor of macroeconomics at UNLV business school until his retirement in 2008. To alleviate the pain from having to work under the public cosh, Hoppe became a resident scholar at the Ludwig von Mises Institute. He writes columns for Mises periodicals and for a German anti-statist magazine. He currently resides in Istanbul, Turkey.[6]

Hoppe's ideological mix of cultural paleoconservatism and libertarianism produces some curious ideas. Hoppe draws out what he sees to be the logical implications of anarcho-capitalist theory and Austrian economics, which lead to some decidedly un-libertarian ideas. For this reason, he has drawn ire from some other libertarians, despite his status at the Von Mises Institute. Critics of anarcho-capitalism might be amused to see that Hoppe's outline of the ideal society resembles the dystopic consequences of an anarcho-capitalist system that the critics point out. The main difference between them is that the critics find these consequences horrifying, while Hoppe gleefully endorses them. The closest he comes to outright denialism is his rebuttal to Benegas Lynch, a professor of economics, who provided him with hard numbers showing that modern monarchies are far poorer than democracies. Nuh uh! Au contraire, says Hoppe, monarchy is superior to democracy because your prax fails to factor in the problem of black people:

Basically, he's asserting that black people aren't good at investing; they like spinning rims more than owning land, etc. This is pretty much his reasoning as to why Somalia isn't a libertarian utopia. But worry not; he's sure that limited government will work out differently with white people!

Hans-Hermann Hoppe is famous for a defense of libertarian ethics derived from the act of argumentation itself.

His argument is roughly the following: if you have a right to debate, you give up violence and acknowledge a right for any person to control their own body, then they have a right to control things that allow their body to exist, the end result being – bingo ! – a justification for private property and traditional libertarian ethics.

This reasoning bears several flaws, some of which being similar for any kind of natural-rights libertarian position, but with added problems in this case.

For one, claiming that since you have a right to debate, you must have a right to control your whole body, is already a bit of a stretch (to say nothing of the rest of his reasoning) since at best it entails the right to use your body to communicate and debate, but not necessarily in other matters.

Another critique is that his argument is just a circular (re-)definition of libertarian ethics that already presupposes core libertarian concepts without directly defining nor defending them. In many ways, it sounds a lot like a libertarian version of presuppositionalism and the transcendental argument for God.

While the argument is still taken seriously by a fair number of libertarians, it is also criticized by many others.

Democracy: The God That Failed[edit]

Hoppe's most notorious work is the book Democracy: The God That Failed. In this book, Hoppe argues that democracy is not an improvement over monarchy. Ultimately, Hoppe sees an anarcho-capitalist society as the ideal, but given a choice between monarchy and democracy, the former is preferable. In a democratic system, the government falls victim to the tragedy of the commons. Politicians in a democracy have a very high time preference (i.e., value immediate gratification) because they have to please their constituents in the span of a term in order to get re-elected. Thus, democracy is short-sighted and favors short-term gains over long-term losses. Monarchy, on the other hand, is the opposite. Monarchs have low time preference for three reasons: (a) their reign lasts for a lifetime (b) they will pass their kingdom on to their heirs, and (c) they have total ownership of their kingdom. In the libertarian view, private property is better maintained than the commons (which is democracy, in this case). Thus, monarchs have a greater incentive to maintain their society. 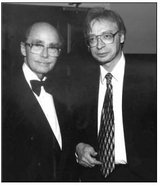 Triple H with fellow Austrian and 2nd man crush, Otto von Habsburg, last Crown Prince / heir to the throne of the Austrian Empire, possibly after enjoying eaches their Vienna sausages at the Mises Institute in 1999.

All states, however, have a problem with time preference in Hoppe's view. Uncertainties in markets generated by state policy interferes with the time preferences of citizens by artificially increasing them. This lowers savings rates and puts a drag on economic advancement. This leads Hoppe to conclude that while monarchy may have advantages, both it and democracy are unacceptable in comparison to what he calls the "natural order," or anarcho-capitalism.

Hoppe is a well-known opponent of open borders, which put him further at odds with his libertarian contemporaries (not so much anymore, though). With regards to the issues of immigration and open borders he wrote in the aforementioned book:

"The current situation in the United States and in Western Europe has nothing whatsoever to do with “free” immigration. It is forced integration […] The power to admit or exclude should be stripped from the hands of the central government and reassigned to the states, provinces, cities, towns, villages, residential districts, and ultimately to private property owners. […], if only towns and villages could and would do what they did as a matter of course until well into the nineteenth century in Europe and the United States: to post signs regarding entrance requirements to the town, and once in town for entering specific pieces of property (no beggars, bums, or homeless, but also no Moslems, Hindus, Jews, Catholics, etc.); to expel as trespassers those who do not fulfill these requirements [...]"[8]

See, private property owners and their chosen forms of association should determine who gets to live where. If you happen to have a high melanin concentration in your skin and a shop owner bars you from entering his store, that's called freedom.

Hoppe fancies himself as a champion of the right of free association. Or what might more commonly be called rank discrimination and bigotry. He proposes "covenant communities," a sort of neighborhood watch on steroids. He gleefully continues:

"True libertarians cannot emphasize enough […] that the restoration of private property rights and laissez-faire economics implies a sharp and drastic increase in social "discrimination" and will swiftly eliminate most if not all of the multi-cultural-egalitarian life style experiments so close to the heart of left libertarians."

You see, Hoppe essentially says, "Everything the left alleges about right-wing libertarianism and its effect on society? It's true. And awesome." In a world of a true lock-down on private property, with no regulation on how such property might be used, there would be unbelievable amounts of social coercion to prevent people from living the lives they'd like. If you don't get on board with the dominant culture, you literally will find yourself with nowhere to live, work, eat, and will summarily die. Hoppe shrugs.

He calls those civil libertarians and minarchists opposing discrimination and the culture wars "the new class of permanent adolescents". This (and lots and lots of other writing of his) hints at one of his major targets of his scorn: the gays.

In a covenant concluded among proprietor and community tenants for the purpose of protecting their private property, no such thing as a right to free (unlimited) speech exists, not even to unlimited speech on one’s own tenant-property…

… One may say innumerable things and promote almost any idea under the sun but naturally no one is permitted to advocate ideas contrary to the very purpose of the covenant of preserving and protecting private property, such as democracy and communism. There can be no tolerance towards democrats and communists in a libertarian social order. They will have to be physically separated and expelled from society.

Eliminating dissent in the brave new world: check. Go on.

Likewise, in a covenant founded for the purpose of protecting family and kin, there can be no tolerance toward those habitually promoting lifestyles incompatible with this goal.

Hmm, I wonder whom he's talking about now.

They — the advocates of alternative, non-family and kin-centered lifestyles...

I still can't quite tell.

… such as, for instance, individual hedonism, …

What? Do we need the landlords approval for when or how we want to have sex?

I think he means babies or sumthin.

which, to be fair, is basically the same as man-on-man action, isn't it?

… — will have to be physically removed from society too, if one is to maintain a libertarian order."[9]

And, surely, Hans-Hermann has the bouncers in their brown shirts and black knee boots on speed dial.
To sum it up: Expansion of private control is not a festival of free-love, wonderful, amazing liberty. It is more a total tyranny (tyranny of the property owner, as opposed to tyranny of the state). Instead of denying these things are true (as many try to), he says they are absolutely true, and that constructing this merciless private tyranny is precisely the point of libertarianism.

This and a lot of other offerings of this "intellectual"[10] made him a sort of backbencher even in libertarian circles.[11]

Aside from the comment above, Hoppe caused controversy at UNLV with his classroom comments about homosexuals. According to students, he commonly made claims that gays were short-sighted and poor at planning for the future. He justified this by asserting that gays were a population with "low time preference" due to the fact that they have fewer children. Of course, he conveniently ignores that gays are in most places barred or at least discouraged from having children, be it through surrogate pregnancy, adoption or IVF. Reversing those policies could quickly reverse that low time preference if, in fact, it exists. In fact, marriage rates show that homosexual adults engage in long-term relationships no less than heterosexuals, suggesting no time preference distinction. Hoppe furthermore speculated that Keynesian economics may have been a result of Keynes' alleged homosexuality. A complaint was brought up against Hoppe and UNLV issued him a "nondisciplinary letter of instruction."[12] Further disciplinary action against Hoppe was eventually dropped, however.[13]

The PFS holds an annual speaking event that turned into a convergence point for white supremacists,[14] paleoconservative nativists and discredited pseudo-scientists — besides the usual libertarian crew of crank economists and conspiracy theorists.

The well-meaning agenda of those meetings is often enough revealed by the titles of some of the talks that are given. Here's an excerpt of the names of those talks which can be found on Youtube and other streaming sites:[15]