Intersectionality is a theoretical framework which describes how individuals and groups can experience oppression or privilege relative to one another, depending on their supposed position within various social categories, such as gender, ethnicity and sexuality. The term was coined by Kimberlé Crenshaw in 1989,[2][3][note 1] specifically as a "common everyday metaphor" that captured the failure of anti-discrimination law to address cases where black women experienced discrimination because of their gender and their ethnicity.[4] Since then, the concept has grown to encompass a veritable plethora of privilege, with activists seemingly keen to elaborate ever finer distinctions between the resulting intersections. As with any currently-fashionable sociological theory, one should ignore the loons and zealots, whilst remaining receptive to any useful insights and grains of truth the theory provides. In the case of Misogynoir (combined sexism and racism) the intersection is frequent and apparent enough to merit its own name.

Individuals do not fit neatly within any one category, but live as people with racial, gendered, abled and sexual identities, privileges and forms of oppression are interlinked and cannot be addressed alone.[6] The relationship between a person's various social identities is more important than a single social identity when it comes to implementing social justice. For example, one might be an upper middle class black cisgender (i.e., assigned female at birth, and still identifying as female) straight woman. This individual would experience life as a woman, as a black person, as a cisgender person, as a straight person, and as an upper middle class person at the same time while importantly also facing oppression because of the interaction[7] of these identities.[8] In other words, social identities are not additive, they are intersectional.[9]

Intersectionality reveals what is not seen when categories such as gender and race are conceptualized as separate from each other. The move to intersect the categories has been motivated by the difficulties in making visible those who are dominated and victimized in terms of both categories. Though everyone in capitalist Eurocentered modernity is both raced and gendered, not everyone is dominated or victimized in terms of their race or gender. Kimberlé Crenshaw and other women of color feminists have argued that the categories have been understood as homogenous and as picking out the dominant in the group as the norm; thus women picks out white bourgeois women, men picks out white bourgeois men, black picks out black heterosexual men, and so on. It becomes logically clear then that the logic of categorical separation distorts what exists at the intersection, such as violence against women of color. Given the construction of the categories, the intersection misconstrues women of color. So, once intersectionality shows us what is missing, we have ahead of us the task of reconceptualizing the logic of the intersection so as to avoid separability. It is only when we perceive gender and race as intermeshed or fused that we actually see women of color.[10]:192-3

There are a great number of categories into which one could be placed which tend to dictate one's chances of experiencing privilege or oppression, such as:

Everyone has an identity in each of these categories or, perhaps more correctly, on each of these spectra. The vast majority of people do not have universal privilege on every single one of these axes of oppression. An individual's privilege is, therefore, a function of where they currently stand. So if they stand at a number of intersecting oppressed identities, they will receive oppression from multiple directions (e.g: transmisogyny or misogynoir[11] ), as well as the non-additive oppression of the interaction(s) of their identities. Conversely, it is possible for interacting privilege to confer non-additive benefits. Thus, if somebody has privilege on many axes, it is possible for certain benefits to cancel out or minimise some of their oppression due to affecting the same factors.[12] 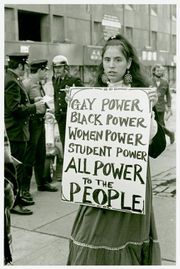 A Stonewall protester holding a banner depicting the intersectional nature of the 1969 riots.

Feminists and social justice theorists and activists more broadly have had a concept of intersecting social categories for some time, but it was not until 1989 that the black feminist scholar Kimberlé Williams Crenshaw first coined the term.[2] Since then, it has had a profound effect on how social critics and academics, and specifically feminists (being part of the bedrock of third-wave feminism) think, talk, and write about the world.[13]

The idea of intersectionality grew in large part out of the experiences of people within social justice movements who came to realize that specific forms of oppression that they experienced were not being addressed by the activist movements in which they participated. More specifically, supporters of intersectional social justice have been central to LGBTQ+ rights, civil rights, women's rights, etc., movements, but have often, as is the case with the Stonewall riots, been ignored. They have been ignored both in terms of the specific oppression they face as well as their contributions, which have been whitewashed or ciswashed by the media.[14][15][16][17][18]

Many progressive movements have conceptual shortcomings that reveal the need for intersectional critiques. Among them are:

For example, when RH Reality Check (now Rewire.News) first came online in 2006, they quickly came under fire from journalists representing minorities. They were saying that, not only did the staff not have any women of color, but the articles also focused on issues from a largely white, middle class perspective. Over the next 8 years, they consciously added journalists who were from minority groups including women of color and transgender women, along with several male writers. Yet even with their active attempt to recognize and change, the site is still challenged to get better at providing diverse perspectives.[24]