Gender is the set of sociological, behavioural and cultural characteristics associated with each biological sex. The World Health Organization

Like most terms used to define a person as man or woman (and/or as "male" or "female") gender can be confusing in application, and often inappropriately applied in non-technical or medical communications. Specifically, "sex" refers to the biological sex organs a person possesses that define them as a male, female, or intersex human. Largely, there are only two sexes, "male" and "female", but as medical advances provide more information, it appears that the world of human sex may not always be so easily binary.[2]

Gender, on the other hand, refers more to the non-biological characteristics of "man" and "woman".[3][4] These are often rooted in stereotypes, including things like "women are caregivers and gatherers", "men are protectors and hunters", "women feel and are intuitive", "men think and work things out" (though sometimes biologically influenced characteristics such as strength and build are included). Some of these roles have been noted to be historically contingent[5] and differ depending on location, culture, and tradition,[6] though cultural universals are noted to exist. 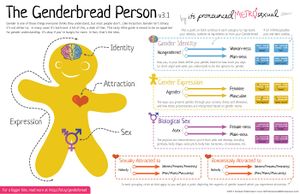 Unlike biological sex, gender and more specifically, gender identity refer to an individual's self-conception and self-presentation.[9] A person born with male sex organs may feel more comfortable taking on the role of a woman in a society, however they may perceive it. This person would claim a female gender, to the extent the society would allow it. Largely, these people would self-identify as transgender, however as the topic of gender identity has been studied and discussed in more depth both in and out of the medical arena, some individuals express a gender that is neither "man" nor "woman", but some combination of both.

It is a fallacy to suggest that an individual person must want their biological sex to match their gender identity. Some, if not many individuals who express gender dysphoria ultimately come to terms with their body "as is", and request society to stop enforcing binary genders on people who do not fit into those categories.

Feminists and others genuinely concerned about sexual equality maintain that many of the concepts and traditions behind gender are socially constructed. A few fringe persons may try to claim that it is entirely a social construct, but the overwhelming consensus of the scientific community is that gender is a product of both biological as well as environmental factors. There are no peer-reviewed studies that have managed to provide any substantial evidence for claims that gender is primarily a social construct or a biological one. However, since claims of biologically-based gender are sometimes used to support sexism or the supremacy of one gender over the other, bringing it up in certain feminist circles can solicit suspicion.

As the modern world begins to become more aware of people who exist outside of society's norms (people who have largely always been around, but were ignored, stigmatized, institutionalized, or who lived their own lives in hiding), we have to develop language to discuss them collectively and individually, in a manner that addresses the differences, but does so with some measure of respect. With major entertainment and news figures coming out as transgender, and with major news events happening around the issues of transgenderism, accurate terms matter more and more.

For most of European history, women have been considered second class citizens compared to men (alongside "sexual deviants", ethnic- and religious minorities, and poor people). This remains true in many ways throughout the world to varying degrees, as a patriarchal society is very much the norm.

The level of oppression has naturally varied. Some societies treated women essentially as equals, although this was extraordinarily rare. More common was the granting of certain levels of rights, such as ownership of property and the right to inherit, such as was found in Sparta or Rome. But even these few rights were generally only given to patrician women of the upper class.

As the general level of education in the first world increased coming into the modern era, attitudes towards women shifted somewhat. Rather than regarding women as naturally inferior, as was typical in medieval Europe, the approach of the Victorian age lifted women from their knees to a pedestal. Still thought to be separate and cognitively inferior, women were lauded as the paragons of virtue or vice.

This typification of the changing attitudes towards women mostly applies to the upper classes however. For the majority of women in, for example, the Middle Ages their legal status might have been inferior to those of men but their actual social position within their economic class was better when compared to the social position of noble women within their economic class. The hardships of daily life meant that the variety of work most medieval woman performed was invaluable thereby making them more valued. The stereotypical image of woman as mere incubation chambers useful for negotiating alliances is closer to the truth for the nobility, whose survival required no manual labor, but even there women could garner significant influence. Those that did were typically vilified for it afterwards though.

The idea that the traditional role of a woman has always been that of a homemaker seems to be a specifically post-WWII middle class idea. Suddenly the majority of families managed to make ends meet with one salary which made woman more financially dependent. It is important to remember that gender equality has not simply been a steady march towards progress and that our idea of gender roles throughout history are heavily determined by what upper-class men wrote about not only their own gender but also their own class.

The late-18th century novel The Vicar of Wakefield[10] recounts a typical attitude that came to be prevalent in European society:

The modest virgin, the prudent wife, and the careful matron, are much more serviceable in life than petticoated philosophers, blustering heroines, or virago queens. She who makes her husband and her children happy, who reclaims the one from vice and trains up the other to virtue, is a much greater character than ladies described in romances, whose whole occupation is to murder mankind with shafts from their quiver, or their eyes.

In this way, emerging sensibilities of fairness and growing recognition of female ability were assuaged by the praise of womankind, while at the same time women were successfully kept within the domestic niche.

In the western World mobilisation of women during the first World War saw many fill roles in traditionally male-dominated industry and occupations. Women were seen to be just as capable as men, physically and mentally, demolishing arguments against women's suffrage, enfranchisement for women by the war's conclusion went from trickle to a tsunami. After gaining the vote, birth control was perhaps the next biggest leap forward in freeing women from traditional gender roles that come with motherhood. Being able to choose when to have a pregnancy is shown to greatly improve their health and that of their children, and greatly improving women's income allows for financial independence, making them less dependent on men. The effects on gender roles have been broadening ever since in the west, despite missteps and push back from religious groups, conservatives, and more recently, from men's groups, allowing more choice, more agency, male nurses, female doctors, more expressions of LGBT identities. Outside of the western world the picture is less utopian, and even within the West, retrograde laws, ridicule and abuse aimed at silencing differing groups to maintain the status quo.

Many social conservatives argue for the "traditional" view of women as being "naturally" (or even, "intelligently"!) designed for homemaking. The modern theory tends to be that being able to bear and nurse children, as well as being unable to gain as much muscle mass as a man, indicates that women are predisposed to stay in the home and raise children. This is often reinforced by prejudices or by traditional religious beliefs, which were created by a largely male ruling/priest class.

Scientific evidence tends to indicate that women and men are equally intelligent, creative, and adept in virtually every sphere of life.

There is a popular belief that the term is a modification of the base word "man," and that accordingly by its very essence it is a misogynistic word. The natural assumption would be that in the linguistic view of the originators of the term, a woman was a modified or somehow "lesser" man. For this reason you will occasionally see feminists use the spelling womyn. This idea may be reinforced by a biblical passage:

While this belief is perhaps justified, given the long history of oppression of women, the real truth is more complex. The word descends from the Old English "wīf," which was often complemented with the gender-neutral term for our species, "mann", to form "wīfmann" for female adults. The treatment of the masculine word, "wer," was similar, with "wermann" being used in the same way for male adults. "Wer" was also used in a variety of other ways that reflected masculine roles at the time, such as in "wergild," the "man-money" paid as ransom to the family of an enemy one had murdered. (We still have words such as "werewolf", i.e., "man-wolf.") Women were not permitted to be warriors, and so, accordingly, it was the masculine term that was reflected in such words.

Male roles and traditions of the same sort dominated oral and written works of the time, and came to encompass a high prestige in Old English-speaking society. Eventually, as the language evolved, because of its much more dominant use, "man" became the gender-neutral term,[please explain] while the more complex "wīfmann" came to indicate women. This resulted in the modern-day use of the terms, where "man" indicates both male and neutral gender, and "woman" indicates women.

Thus, while there is some element of misogyny within the use of the term, it is more of a result of the overlying social structure rather than specific anti-woman sentiment among the speakers of English.

It is also worth noting that "woman" is unrelated to the term "womb," which originally meant "belly."