¡Ay, caramba!
Not to be confused with the unrelated Simpson's paradox 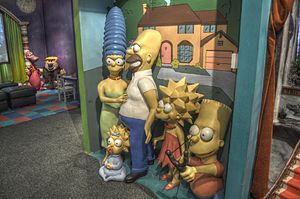 The Simpson family in fabulous 3D! Barney Rubble can be seen coexisting with a dinosaur in the background.

The Simpsons is an animated sitcom from the Fox Network first broadcast in 1989.[1] It is often hailed as one of the best American TV shows ever, if not the best.[2][3][4]

Its central focus is a family of five Simpsons:

However, what distinguishes the show is its vast range of additional characters, mostly voiced by a core cast including Castellaneta, Hank Azaria, Harry Shearer, Pamela Hayden, Tress MacNeille, and in early years the late Phil Hartman.[5]

Controversy surrounding the series includes claims that it has an uncanny power to predict the future, allegations of racism, and its treatment of rationalism and skepticism.

There are claims that The Simpsons has uncannily predicted the future, including the following:[6][7][8]

Identifying such coincidences is entertaining for fans, but can generally be explained by the show's incredibly lengthy running time. While largely set in present-day America, The Simpsons has had several episodes set in the future, such as the previously mentioned "Lisa's Wedding", as well as the fantastical "Treehouse of Horror" anthologies which break the continuity of the main show to present science fiction or horror stories. A study reported in 2018 found that The Simpsons over its 30-year run had made about 1224 predictions about the future, which allows for a lot of correct ones even if the overall rate is very poor.[20]

And sometimes the show cheats: there's an episode where Lisa predicts the Super Bowl winner, which has been altered for subsequent broadcast to update the teams.[8]

Likewise a lot of other shows have predicted spooky things (that are almost certainly just coincidences); for instance The Lone Gunmen

had a plot about terrorists flying a plane into the World Trade Center, broadcast a few months before the actual 9/11 attacks.[8]

Allegations of racism centre on the character of Apu the convenience store clerk. He is often considered a caricature of an Asian-American, working in a stereotyped job. The show has given him a variety of more-or-less stereotypical plotlines including an arranged marriage. When the show started, issues of representation were less commonly discussed, but Apu has recently become more of an issue (partly because the number and visibility of Asian Americans has increased). The criticisms were given focus by comedian Hari Kondabolu's 2017 documentary The Problem with Apu:

Kondabolu emphasises that he is a Simpsons fan but finds Apu racist and suggests the character encourages racist abuse of Indian-Americans.[21][22]

The controversy has received a variety of responses from the show. Hank Azaria, the in-no-way-Indian actor who voices Apu, has been sympathetic to concerns, suggesting an Asian actor could be cast as Apu.[23] Creator Matt Groening has equivocated.[24] Show runner Al Jean has defended the show, mocking criticism in the episode "No Good Read Goes Unpunished".[25] This episode sees Lisa and Marge reading an old book full of inappropriate content, as is often experienced when returning to problematic childhood faves like Enid Blyton's character Nigger the Golliwog in the Noddy books; Marge wants to re-write the book but Lisa has a dream where she's visited by the book's creator and then delivers an on-the-nose speech telling the show's critics (in an address direct to camera) "Something that started decades ago and was applauded and inoffensive, is now politically incorrect. What can you do?" The program then shows a photo of Apu, and Marge says, "Some things will be dealt with at a later date," and Lisa adds, "If at all."[26]

The criticisms of the show's portrayal of Apu involve a number of related points:

The criticisms have not been universally accepted, with lots of conservatives and fans of the show taking the point of view that there's no problem. Pradeep J Shanker argued in the National Review that Apu is a praiseworthy character: a good father to octuplets, extremely religious, a gun-owner, and a businessman (not all of which are universally-beloved attributes, and as a store-owner he's shown to sell out-of-date and unhygienic food amongst other violations). Shanker acknowledges the lack of representation of Asian Americans, particularly in the recent past, but denies that name-calling is a significant form of racism.[27] It's certainly true that Apu's portrayal is far from the most racist thing in American society, but that doesn't make it right (a prime example of Whataboutery from Shanker). And even if Apu's character has been fleshed out over the years, the show undeniably mocks and stereotypes Hinduism, Indian culture, and Indian-Americans; even though it also mocks Christianity and American culture, there is a difference between mocking the mainstream (where there are many other representations, powerful people can offer alternative views, and most of the population have considerable knowledge already), and mocking minorities.

People differ on what to do but there are some commonly advanced solutions:

Eventually, the show writers of the Simpsons started phasing out the character of Apu, quietly diminishing his role as early as 2018.[28] In January 2020, the voice actor who played Apu, Hank Azaria, said that he would no longer voice the character.[29] Azaria later apologized for the character in April 2021, stating that although he believed the character was created with good intentions, the portrayal nonetheless was a symptom of "structual racism".[30] Despite the above, series creator Matt Groening continues to insist that Apu has not been written out of the show (in fact, he claims to be proud of the Apu character) and there may still be plans for the character in the future.[31]

The show has other characters that might be problematic, although they're often excused by the show's focus on offending everybody.[32]

Its African-American characters are very different from Apu in that they're very specific and unique individuals rather than standing for an entire race, although white actors are still commonly used. The main ones are:

There are also stereotypes of hillbilly characters, notably Brandine and Cletus, with their billion children, bad teeth, stupidity, references to incest, and other cliches about Appalachian mountain folk.[34] This is a meaner cliché than Apu, but people aren't so bothered about attacks on rural whites (partly because they're less likely to be killed for who they are than other minorities).

There are also stock Italian characters, Luigi, a stingy chef, and Fat Tony, a mafia leader, who are both like Apu in being obvious ethnic stereotypes (though it may help that Fat Tony is played by an Italian-American, Joe Mantegna.)

Allegedly, a writer called Mimi Pond was considered for a staff position when the show first started but rejected because producers wanted an all-male writers' room.[35] Since then there have been female writers such as Jennifer Crittenden but the writing staff is still largely male.

In this episode, Lisa discovers a skeleton that appears to belong to an angel. All the townspeople except her are convinced it is some kind of religious omen and the end of the world is nigh. Eventually, it turns out to be a PR stunt, not an angel, and Lisa was right all along.[36] (On the other hand, Lisa is a Buddhist in later episodes.)

The show takes a mocking or hostile view of nuclear power, which is far safer than scary hydroelectric generation. However, this is largely for the humor, as C. Montgomery Burns's nuclear power plant is intentionally portrayed in ridiculous ways.

It's important to remember the context in which The Simpsons was created. When The Simpsons was initially created in the late 1980s, Chernobyl, Three Mile Island, and many other nuclear accidents were fresh on everybody's minds. The idea of a bumbling idiot being a nuclear power plant inspector was a funny joke at the time. However, the staff would wind up visiting the San Onofre Nuclear Power Plant early on in the series' history and their overall attitude towards nuclear energy would change.[note 1][37]

An early episode parodied popular 1990s show The X-Files, dealing with themes of supposed aliens that have an actual rational(ish) explanation.[38]