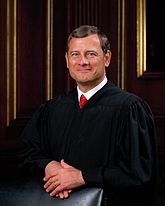 Official portrait of the Chief Justice.

John Roberts is the current Chief Justice of the Supreme Court of the United States. President George W. Bush nominated him to be an Associate Justice to the Court in 2005. After the death of Chief Justice William Rehnquist in September of that year, he was renominated by President Bush to be Chief Justice. He is also a former member of The Heritage Foundation.[citation needed]

Despite the characterization of him by Ted Cruz as a "liberal,"[2] he is generally considered to be a member of conservative wing the Court.[3] He is, however, much more conciliatory than Justice Samuel Alito, and late Justice Antonin Scalia. Unlike Justice Clarence Thomas, he cares about the image of the Court in the public imagination and desires to restore the bipartisan legitimacy of the Court. (See his quote above.) He is much more moderate than what ideologues from either side of the political spectrum describe him to be.[1]

As reported in the New York Times, Roberts represented Discover Card before being appointed to the SCOTUS and was unsuccessful in getting the Court to uphold mandatory arbitration clauses (class-action bans) in contracts with consumers, but voted in favor of such bans as Chief Justice.[4][5] The Times reports arbitrators can and have used the Bible as the basis for their decision.[6]

In 2010, Roberts wrote the majority (5-4) opinion in Citizens United v. Federal Election Commission striking down part of the McCain-Feingold Act of 2002 and upholding freedom of speech for corporations.[7] In 2012 he was the key vote in upholding (most of) President Obama's Affordable Care Act.

With Kennedy's retirement in 2018, and his controversial[8] replacement Brett Kavanaugh all but certain to have a more conservative record than his predecessor, it is likely that Roberts will be the Supreme Court's new swing vote for the time being.[9]

In late 2018, Donald Trump called a judge from the 9th Circuit[note 1] who rejected his migrant asylum policy an "Obama judge." This prompted Chief Justice John Roberts to respond, "We do not have Obama judges or Trump judges, Bush judges or Clinton judges." Roberts then added one day before Thanksgiving, "The independent judiciary is something we should all be thankful for."[10] Such a dispute between the heads of the executive and judiciary branches is exceedingly rare, but not unprecedented. President Barack Obama criticized the Supreme Court in his 2010 State of the Union Address. When asked about it, Roberts said the criticisms were very troubling.[11] However, Roberts has generally avoided dipping his toes into political discourse. Nevertheless, in light of the appointment of Justice Brett Kavanaugh, Roberts and some of his colleagues have taken steps to combat the perception that the Supreme Court is politically divided between conservatives and liberals and that judges are loyal to the Presidents who appointed them.[10]

This law-related article is a stub.
You can help RationalWiki by expanding it.
Retrieved from "https://rationalwiki.org/w/index.php?title=John_Roberts&oldid=2147022"
Categories:
Hidden categories: