Schenck v. United States, also known as the "clear and present danger" case was a case argued before the United States Supreme Court regarding the federal government's ability to limit free speech in times of national emergency. During World War One, the government convicted two anti-war socialists under the Espionage Act of 1917

for distributing pamphlets urging people to dodge the draft. The Court unanimously decided that the defendants' attempts to undermine the draft created a "clear and present danger" to the country.[2]

Opposition to America's active role in WWI was intense, especially from international businessmen, suffrage activists, and leftists.[3] In response to this, in 1917, the United States Congress passed one of the most controversial laws in its history: the Espionage Act. Although most of it was common sense, the Act went further by declaring a criminal anyone who,

In 1918, the government went even further by amending the law with the Sedition Act of 1918,

which criminalized any negative speech about the government during wartime.[4]

At the time, Charles Schenck was the general secretary of the Socialist Party of America, and he strongly opposed the United States' entry into the war. He took action by organizing the publication and distribution of pamphlets encouraging people to peacefully avoid the draft. The text of the leaflet began with, "Long Live The Constitution Of The United States; Wake Up America! Your Liberties Are in Danger!" and cited the Thirteenth Amendment's ban on involuntary servitude as a reason why the draft should be illegal.[5] Schenck and his colleague Elizabeth Baer were charged under the Espionage Act for "conspiring to cause insubordination", which netted them a prison sentence of six months and three months respectively.[5][6] The pair appealed this decision to the Supreme Court.

The decision of the Court[edit] 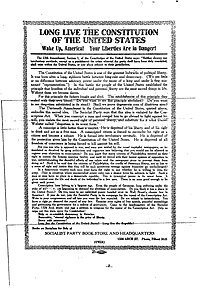 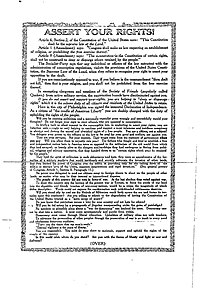 Schenck's contention before the Court was that the Espionage Act itself was unconstitutional under the First Amendment. This wasn't quite the slam-dunk argument that it may sound like; there hadn't been very many First Amendment cases at this point in American history, and the Court at this point was very friendly to government suppression of dissent.[6] In other words, is it weird that segregation-era US government officials were disturbingly authoritarian? No. Not really.

The Court unanimously upheld Schenck's conviction.[2] Justice Oliver Wendell Holmes Jr. wrote the decision, admitting that under normal circumstances Schenck should not have been convicted.[1] However, he then went on to express his opinion that free speech depends on circumstances. When the nation is in danger, he argued, the government has the right and duty to prevent speech that imperils its ability to prevent that danger.[1]

The decision of the Court and especially a certain quote by Justice Holmes established the "clear and present danger" test, the standard by which it could be determined whether a curtailment of freedom of speech was legal based on the circumstances.[7] This means that when the government considers limiting speech, it must consider both the seriousness of the danger said speech represents as well as the likelihood of said danger actually manifesting.

This precedent is not without its critics. Justice Hugo Black was a notable critic, stating that attempting to balance constitutional freedoms with other government aims could only lead to the destruction of said freedoms.[8]

Only a year later, Justice Holmes attempted to walk himself back with the Abrams v. United States case, where he dissented on the belief that the courts should enforce a stricter standard on whether the government can limit speech and changing his phrasing to "speech that produces or is intended to produce clear and imminent danger that it will bring about forthwith certain substantive evils that the United States constitutionally may seek to prevent."[5]

However, the "clear and present danger" test would survive until it was replaced with the Brandenburg Test through the Brandenburg v. Ohio case in 1969. There, the Court decided that speech can only be prohibited if it is "directed at inciting or producing imminent lawless action" and also "likely to incite or produce such action."[9]

The Espionage Act is also still alive, and it was used against Daniel Ellsberg and has also been aggressively used by the Obama administration and recently by the Trump administration against whistleblowers.[10]